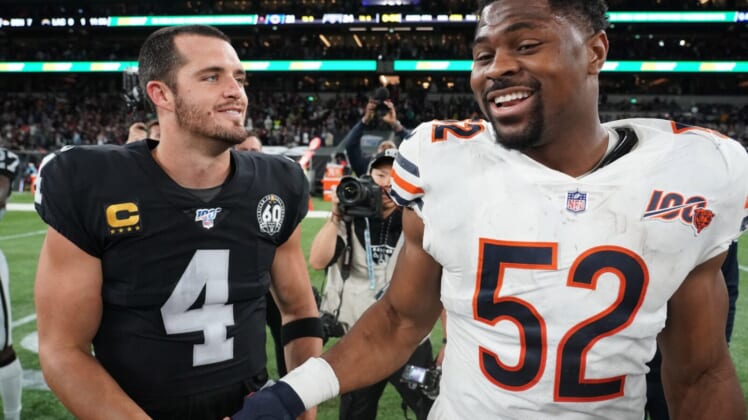 The much-ballyhooed NFL Schedule for 2021 was released and the Las Vegas Raiders again have a slate filled with exciting games and possible stumbling blocks. We look at the three sexiest matchups for the Raiders schedule next season.

With fans set to return to stadiums this fall for the start of the 2021 NFL season, perhaps no other fanbase is more fired up to get inside their new home than those of the Las Vegas Raiders. The Raiders schedule was released this afternoon, along with the rest of the league, and it offers a glimpse at a road to the team’s first playoff berth since 2016 but also includes possible stumbling blocks to get back to a winning record.

With an opening weekend Monday Night Football matchup at Allegiant Stadium against Lamar Jackson and the Baltimore Ravens, the Raiders will be tested early. Here’s a look at the three sexiest games on the Las Vegas Raiders schedule for 2021:

The Raiders schedule has some great prime-time key matchups throughout the 2021 season, but none better than playing a Thanksgiving game against former teammate Amari Cooper, star QB Dak Prescott and the Dallas Cowboys on Turkey Day. The Raiders are 3-4 playing on Thanksgiving while the Cowboys are perennial holiday game hosts having compiled a 30-21-1 record on the uniquely American holiday. The teams last met on Thanksgiving in 2013 with the Cowboys besting the Silver and Black by a touchdown.

The last time Jon Gruden and the Raiders schedule included a matchup against former teammate Khalil Mack was 2019 in London. The Raiders held Mack in check and edged the Bears 24-21 at Tottenham Hotspur Stadium in London and the Bears haven’t progressed much (see: no quarterback) since the blockbuster deal. Still, Mack coming back to face the Raiders in their new packed home is too good a storyline not to love. The Black Hole and Raider Nation loved Mack, but he’ll be wearing the Navy blue and orange and they will be pumped to face the former Raiders defender.

Yes, opening the new Allegiant Stadium to fans for the first time in Week 1 against the Ravens on Monday night is going to be epic. Still, the game against Kansas City in Week 14 could be massive. With the history of late-season fades by the Gruden-led Raiders, the Silver and Black might be fighting for a playoff spot late in the season and a big win in Kansas City is the kind of game that can propel a team to new heights. The Raiders won in Kansas City last year (remember the whole bus victory lap fiasco) and should have beaten the Chiefs in Vegas too. This is the type of game that could end playoff dreams for the rebuilt-rebuilding Raiders or be the spring to a late-season push. Either way, Raiders vs. Chiefs matchups are always special and this could be a big one for the future of the franchise.