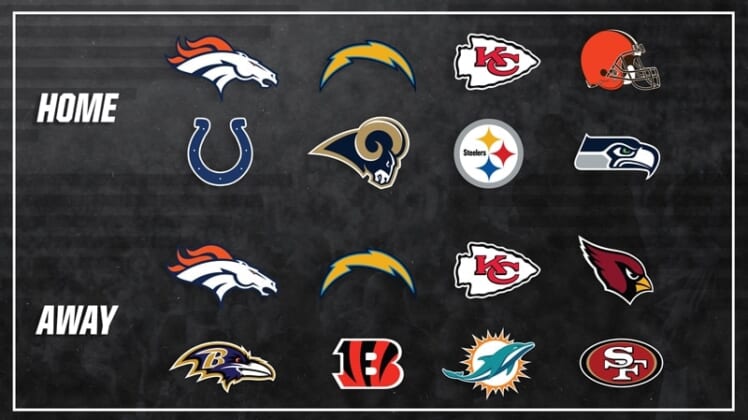 The Raiders will play on prime time television four times during the 2018 season with a schedule light on a heavy presence in Oakland.

The Oakland Raiders start the 2018 season as Jon Gruden has the past 10 seasons – on Monday Night Football. The NFL and Raiders released the league’s schedule today.

The Raiders 2018 full slate was released with much fanfare and includes an opening week matchup against the young and talented Los Angeles Rams at the Oakland–Alameda County Coliseum on Monday, September 10. It’s the only one of two games out of the first six weeks that will be played in Oakland.

Oakland then travels to Denver in Week 2, and cross-country to Miami in Week 3 to take on the Dolphins before returning home to face the Cleveland Browns. Then it’s another divisional road game against the LA Chargers, then all the way to London  for a “home” game against the Seattle Seahawks.

The Raiders then get an early season bye in Week 7 before hosting the Indianapolis Colts in Oakland on October 18. In fact, Raiders play back-to-back home games in Oakland only once during the entire 2018 season – Weeks 13 and 14. They’ll face hated rivals the Kansas City Chiefs and Pittsburgh Steelers in those two games.

The Raiders also renew their rivalry with the cross bay San Francisco 49ers in Week 9 on Thursday Night Football at Levi’s Stadium in Santa Clara. Other opponents include the Baltimore Ravens and  Cincinnati Bengals.

Join us Sunday from 8am-10am PDT on CBS Sports Radio 1140-AM Las Vegas for the Silver and Black Today show to discuss the schedule and an early take on the Raiders record. NBC Sports Bay Area Raiders insider Scott Bair will join us to discuss along with the latest on the NFL Draft. The show can be heard live in Las Vegas and worldwide streaming through the Radio.com app for both iOS (iPhone) and Android phones. Replays of the show will be available Monday on the Silver and Black Report website.

Don’t forget to also subscribe to the Silver and Black Report Podcast, available on all major platforms including iTunes, Google Play, Soundcloud and Stitcher. We appreciate your support of our site and ask that you subscribe on your favorite format. That way you’re assured of getting the latest podcasts delivered right to your device.

Also: please take the time to leave us a favorable review. That helps us make sure more and more of Raider Nation finds the podcast and listens.