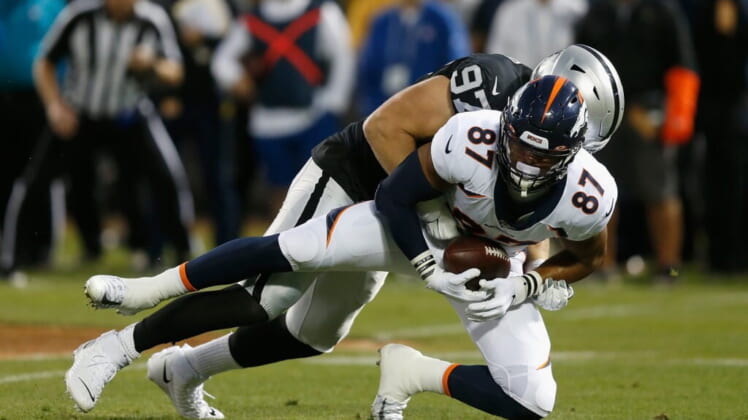 OAKLAND, CALIFORNIA – SEPTEMBER 09: Noah Fant #87 of the Denver Broncos is tackled for a loss by Josh Mauro #97 of the Oakland Raiders in the first quarter of the game at RingCentral Coliseum on September 09, 2019 in Oakland, California. (Photo by Lachlan Cunningham/Getty Images)

The Raiders defense is improving and currently ranks 5th in the NFL against the run. In the Vikings, Oakland faces a big test to gauge just how far they’ve come.

Going into Week 3, the Oakland Raiders defense has excelled in one area that will help them in their matchup with the Minnesota Vikings—the group has stifled the run in the first two games.

The Raiders’ fifth-ranked run defense will go up against a revamped Vikings ground attack, which lists second leaguewide with 370 yards. Are the Silver and Black’s improvement up front legitimate? We’ll find out in Sunday’s road test.

Last year, Oakland ranked 30th against rushing offenses. Nose tackle Justin Ellis, a proven run-stopper, missed 10 games with torn ligaments in his foot; he’s currently on season-ending injured reserve with a knee injury, but the front office made some moves to improve the front line without him. Keep in mind, the 28-year-old logged 21 run stops during the 2017 campaign—the most of any Raiders player on the defensive line, per Pro Football Focus.

The current coaching regime called on defensive tackles P.J. Hall and Maurice Hurst to show improvement in their sophomore campaigns. They’re both playing fewer than 50 percent of defensive snaps, which factors into why neither has popped off the screen in terms of impact.

For starters, the Raiders have five sacks, which is about 38 percent of last year’s total. The run defense has kept its first two opponents under 100 rushing yards without surrendering a touchdown.

Defensive coordinator Paul Guenther has placed a lot of trust in seventh-year veteran Johnathan Hankins, who’s lining up for 74.45 percent of defensive snaps; he’s produced while handling a heavy workload with a team-leading six run stops, per PFF.

In an underrated offseason move, the front office signed defensive end Josh Mauro as one of the team’s first acquisitions. With so much focus on the Raiders’ 2018 sack count (13), many overlooked this pickup because he recorded just three sacks in five seasons before joining the Silver and Black. The 6-foot-6, 290-pound big end is tied with linebacker Tahir Whitehead for the second-most run stops on the team (four), per PFF.

Heralded rookie Clelin Ferrell logged 50.5 tackles for loss; that’s not a popular number compared to his 27 sacks on the collegiate level, but his ability to set the edge has been a valuable asset for the Raiders front line. He’s notched six tackles, three solo and two for a loss. Beyond the box score, the 6’4″, 264-pounder redirects ball-carriers back inside, so his teammates can record stops.

When measuring defenses, we often look for sacks, interceptions, and takeaways to affect the bottom line, yards and points allowed. Defensive line coach Brentson Buckner highlighted a deeper focus, specifically in creating longer third-down scenarios with early stops. He talked to The Athletic’s Vic Tafur about the run defense.

“I am not going to get into the pass rush gotta be this or this or this. Because if you don’t stop the run, you don’t get a chance to rush the passer. We’re working on just being better football players, technique … trying to be more cerebral about the game than always depending on the physical (aspect) of it.”

Thus far, Buckner’s vision has paid off. For starters, the Raiders have five sacks, which is about 38 percent of last year’s total. The run defense has kept its first two opponents under 100 rushing yards without surrendering a touchdown. In 2018, the unit had allowed 308 yards on the ground through Week 2.

Yet, one can argue the current numbers pertaining to the Raiders run defense may be a bit misleading without context. Broncos starting right tackle Ja’Wuan James suffered a knee injury in the first quarter of the season opener, which affects blocking on outside runs to the strong side.

In Week 2, Kansas City Chiefs running back Damien Williams went into the matchup questionable with a knee injury and couldn’t finish the game. LeSean McCoy suffered an ankle injury late in that contest. Lastly, quarterback Patrick Mahomes had a lot of success throwing deep in the second quarter, so the Chiefs didn’t need the ground attack.

This Sunday, the Raiders will face an offense that’s heavily reliant on a healthy featured ball-carrier. After missing 17 contests over the last two years with a torn ACL and a hamstring injury, running back Dalvin Cook looks phenomenal; he leads the league in rushing yards (265) while averaging an impressive 6.5 yards per carry.

The Raiders will need healthy bodies and its top run-stoppers ready for a physical matchup, which may swing either way if the Vikings struggle to move the ball with their rushing attack.

Minnesota hired Gary Kubiak as an offensive advisor to play-caller Kevin Stefanski and made some tweaks to its offensive line. The Vikings selected center Garrett Bradbury with the 18th overall pick in this year’s draft, shifted Pat Elflein to left guard and signed seventh-year veteran right guard Josh Kline.

The Vikings have the 10th-best run-blocking group in adjusted line yards (4.74), per Football Outsiders, a metric that measures offensive lines based on run successes and failures on different downs, distances and formations.

Oakland will have to find ways to penetrate a stout front five and take down Cook while he’s performing at his best, which is a tough task for any team. Defensive tackle P.J. Hall lists questionable for the upcoming contest with an illness, but head coach Jon Gruden said interior tackle Corey Liuget could make his Raider debut Sunday.

The Raiders will need healthy bodies and its top run-stoppers ready for a physical matchup, which may swing either way if the Vikings struggle to move the ball with their rushing attack. Quarterback Kirk Cousins hasn’t looked sharp to start the season, throwing for two touchdowns and a pair of interceptions while completing just 52.8 percent of his passes.

Unless Oakland’s pass defense falls apart with miscommunications again, expect a low-scoring game at U.S. Bank Stadium. Regardless, we’ll see a lot of handoffs to Cook. Last year, the Raiders knew teams would run the ball on them but couldn’t stop the attacks. They’ll have a chance to show this isn’t the same porous front seven in a crucial road test.