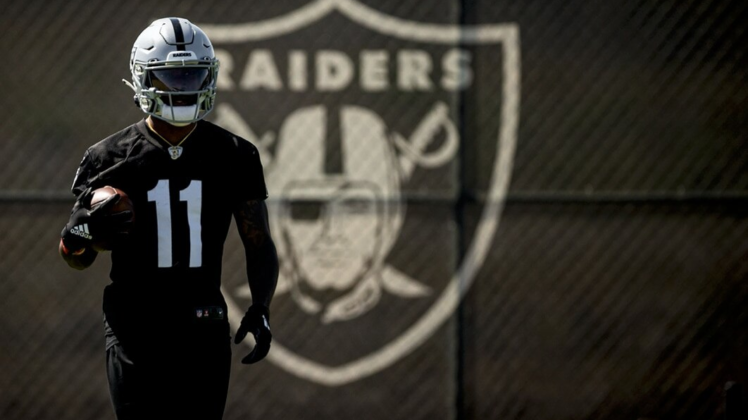 Making the jump from major college football to the NFL isn’t easy but the Las Vegas Raiders rookie wide receivers Henry Ruggs III and Bryan Edwards say they’re ready and have helped each other get set for their pro debut.

Even though both Las Vegas Raiders rookie wide receivers Henry Ruggs III and Bryan Edwards played major college football, the next level up in the NFL is no cakewalk. For the Raiders Ruggs and Edwards, helping one another has prepared them to begin their NFL careers as starters in Jon Gruden’s less-than-easy to figure out offensive scheme.

“We know that’s a big role as starters as first-year players, but at the end of the day it’s football,” Ruggs III told the media late this week. “We came here to play football. We both played in the SEC. I feel like we know what football is, and just come in and compete and play the game that we know how to play. It’ll speak for itself, our hard work.”

For Edwards, the bond created between him and his new rookie teammate happened early and continues to flourish.

“Me and Henry have got extremely close throughout camp,” Edwards said of his Raiders teammate. “We’re two kind of quiet guys, so it took us a while to kind of mesh. We have a great relationship, we spend a lot of time out of the building together and I feel like we can accomplish a lot.”

While they might both be quiet off the field, the Raiders Ruggs and Edwards plan on making a lot of noise on the field – starting Sunday in Charlotte.

“We work off each other very well,” Edwards said. “He’s a speed guy and I’m more of an in-between guy, a big body guy. So, I feel like we can feed off of each other and be two valuable assets for the team.”

For Ruggs, the big lights of the NFL won’t phase him much, he says, as playing in big games his entire career in Alabama have prepared him for this moment.

DC has been an extreme help for me and Henry. Being young guys, obviously having a veteran in there, it helps tremendously. – Bryan Edwards on Raiders QB Derek Carr

“You never let any moment get too big,” Ruggs said. “Like I said, it’s still football regardless. So, I mean whether you make a play or make a mistake, you still have to move on and play the next play. So, can’t let anything get too big and can’t get down on yourself too much and dwell on any mistakes because things are going to happen.”

The Raiders Ruggs and Edwards perhaps get a bit of a break with no fans in attendance at Bank of America Stadium in Charlotte, but Edwards downplays any nerves over playing – and starting – in his first NFL game.

“For me, it’s just football,” Edwards said of his pro debut. “I’ve been playing football since I was a kid. It’s what I came up doing. So, when I get into that mode and you get that first hit out of the way, for me it’s just football, honestly.”

It’s the same attitude Edwards’ new friend and teammate Henry Ruggs III echoes when he talks about pregame jitters on the eve of his NFL career beginning.

“We’re all professionals,” Ruggs said. “At the end of the day, like I continue to harp on, it’s just football. Never let anything take you away from just playing football and doing what you know.”

Both the Raiders Ruggs and Edwards also credit seventh-year quarterback Derek Carr with helping early in their development. It’s been his steady hand, one-on-one work, and leadership that have also prepared both to start from the get-go.

“DC has been an extreme help for me and Henry,” Edwards says of his quarterback. “Being young guys, obviously having a veteran in there, it helps tremendously.”

The sentiment around Carr’s ability to help his young receivers get ready for the big moment is also echoed by Ruggs III.

“I mean Derek’s helped tremendously, since the draft, since we got started from the Zoom calls and everything,” Ruggs said. “He’s always been a help, someone I can call – and not only me but anybody that has questions – so that’s been big to me. That helped us develop and move into the offense faster.”

It’s also Edward’s veteran receiving brethren who have helped him learn the vaunted Gruden playbook – which is no easy task according to the young wideout.

“The learning curve was steep to be honest with you,” Edwards recalls. “But the Zoom calls and all the things we did in the offseason, that helped tremendously. Then having great veterans like DC, Nelson [Agholor], Zay Jones, all those guys, they helped me get over that hump and I feel pretty comfortable in the offense right now.”

The Raiders Ruggs and Edwards better be comfortable in the offense as they figure to play prominently in it Sunday against the Panthers. The ability for the two young wide receivers to make plays and contribute from the start will be a key for the Raiders to get off to a quick start in 2020.

Las Vegas Raiders offensive coordinator Greg Ols0n says he and the staff all believe the two are ready for what lies ahead. For the Raiders Ruggs and Edwards, the time is now and Olson believes both are prepared.

“We feel very good about both of those players. The game hasn’t been too big for them,” Olson said on Thursday. “It’s a credit to the college coaches and the college programs they came from. They played in front of big crowds. Their coaches prepared them very well in college for the next level. We are fortunate that way. We haven’t had to hold back at all with those two.”