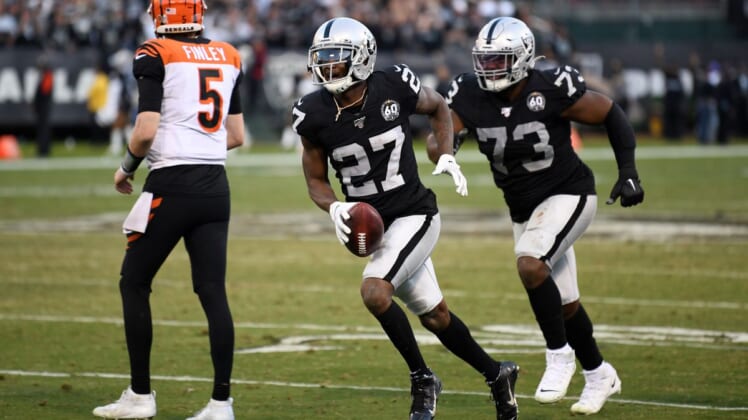 While it’s just past the halfway point of the 2019 season, the Raiders rookie class of 2019 is setting records and perhaps a course toward a championship once they reach Las Vegas

Broadcasting live draft coverage this year from a local bar, surrounded by my fellow Silver and Black Today co-host Kelly Kriner, and CBS Sports Radio 1140 colleagues Paul Ihander and Tony Cordasco, I’d be lying if I didn’t say I was perplexed by some of the Raiders draft picks.

As the first round unfolded, I joined the world in thinking the Raiders may have drafted Clemson defensive lineman Clelin Ferrell a bit early, loved the pick of Josh Jacobs, was uncertain on Jonathan Abram, and just didn’t get what Mike Mayock and Jon Gruden saw in fourth-round pick Maxx Crosby.

Fast forward to Sunday and just how wrong I was on Crosby was evident as the rookie out of Eastern Michigan put on a clinic against the Bengals laughingstock of an offensive line. Crosby finished the day with four sacks as he finally broke out in a way the rest of the world noticed just how good he’s been.

For all the talking heads (including me!), fans, and Twitter GMs out there, who don’t have the acumen and skill to notice what lies underneath, you have to tip your hat to the Raiders for what they’ve been able to do with this rookie class.

According to the Associated Press‘ Josh Dubrow, the Raiders are the first team since the sack became an official statistic during the 1982 season to compile 10+ sacks and 10+ touchdowns from rookies in the first 10 games of a season.

There’s no denying it – the Raiders 2019 draft class is propelling this team into a legitimate contender in the AFC West. Currently tied in first place with the Kansas City Chiefs for the lead in the AFC West, the biggest reason why they are is because of this tough and talented group of rookies.

“I had a good game but it was a collective unit,” Crosby said after his four-sack performance. “We got a good rush all day and I think it started with San Diego (LA Chargers) and it’s just kept getting better.”

And that’s what’s so encouraging about this Raiders rookie class. Not only are they performing, but the improvement is steady and visible on a weekly basis.

That’s not to say this unit is anywhere near done being all they can be. Lately, they’ve been feasting on week opponents and offensive lines. Yet in the NFL, when you play lesser opponents you should be. If this unit wasn’t that would be cause for concern.

“We have a good mixture of veterans and younger guys,” Crosby added. “Having the vets there helps a ton on the mental side just keeping us ahead of the game and I feel it’s a good dynamic and it’s finally starting to come together.”

Although their win yesterday against Cincinnatti was ugly at times, a win in the NFL is a win and that’s what matters. The past few weeks when the offense or defense isn’t doing their best, the other side of the ball is picking up the slack and winning games. Against the Chargers, the offense sputtered and the defense won the day. After LA scored a late touchdown, Derek Carr and the offense found a groove and marched down the field to win the game.

There’s no denying this Raiders rookie class – even without one of its best players in the injured Jonathan Abram – is doing exactly what Mayock and Gruden wanted it to. The days of anguish over the trade of Khalil Mack are over. Trusting the process is starting to show direct wins and fans should be excited about what’s to come.

Gruden has a 10-year contract and a sense of freedom no other coach or general manager has in the NFL. It was the reason why he could tear down the roster, trade Mack, and remake it with the talent and character he wants.

“We still have a long way to go, we’re still building our team,” Gruden said after the Bengals win. “I’m going to keep emphasizing that. We’re not a finished product by any stretch but we’re still competing hard and finding ways to win.”

They are fighting hard and their young players like Crosby, Jacobs, Trayvon Mullen, Hunter Renfrow, and Clelin Ferrell are all part of the reason why this team’s makeup has changed for the better.

With Las Vegas on the horizon, and another generous amount of high draft picks in the 2020 draft, the Raiders are on the road to perhaps regaining the winning culture that once made them the shining example of what an NFL franchise should be.