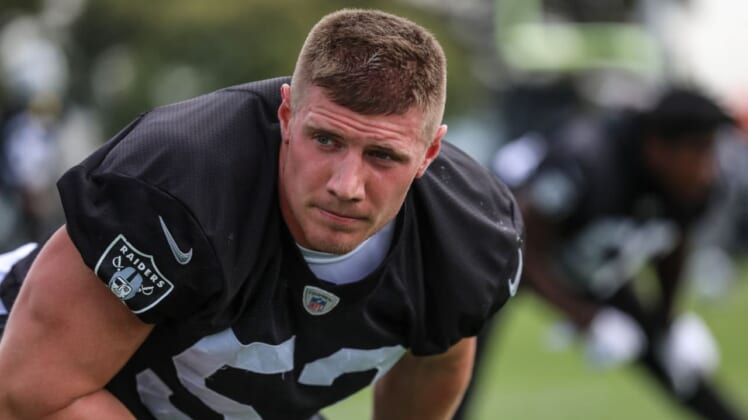 Las Vegas Raiders linebacker Quentin Poling posted on Twitter Tuesday that he has been told by his doctor he, his wife and two-year-old daughter have been infected with the COVID-19 virus.

The current coronavirus crisis has now touched Raider Nation as reserve linebacker Quentin Poling has said he and his family have been told by doctors they have contracted COVID-19.

Polling took to social media to post what his doctor had told him despite he and his family not being tested. Poling stated they were not initially tested for the virus because they are not in what the government considers a high risk group.

High-risk groups consist of the elderly and those with underlying health issues.

Quentin Poling, who chronicled his recent vacation to Spain with his family, said he had come down with a dry cough that soon spread through his family. He soon became ill and stated he felt as though he should have been tested and wasn’t.

Poling’s frustration with the lack of testing echoes the sentiments of millions of Americans who were unable to get tested. Although the CDC says tests are being sent out all over the nation, the system is still lagging and more Americans are contracting the virus.

Quentin Poling originally signed with the Raiders in 2019 and was assigned to the team’s practice squad. He was activated, cut, and then signed by Atlanta where he also was a member of the Falcons practice squad before the Raiders resigned him.

The news comes during a very busy week for the Raiders as the NFL new year begins today. Having signed big-name free agents Cory Littleton, Marcus Mariota, and Jason Witten already, and three other players, the team’s business forges on despite a ban on travel and with the entire organization working remotely.