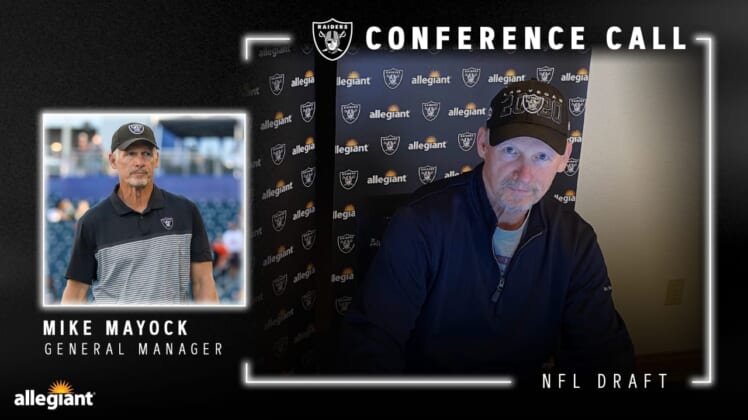 Now that fans and critics have had a bit of time to digest what was the Las Vegas Raiders first draft, we take time to think out loud about draft grades, critical analysis of their picks, and what’s next.

The NFL’s first “virtual” draft is in the can and it went far smoother than anyone could have anticipated. The same can be said for the Las Vegas Raiders.

Here are some takeaways based on my observations over the weekend and the impact it will have for the Raiders.

Their Way or the Highway

Despite what I, or anyone else for that matter, thinks of who the Raiders drafted and when general manager Mike Mayock and coach Jon Gruden have their guys and your mock drafts and draft grades don’t matter. And you have to respect their commitment to their plan and talent evaluation.

“We’re joined together at the hip. Let’s be patient, let’s trust our board,” Mayock said Saturday of his team’s draft evaluation. “We’ve done all the work. We really don’t care what anybody outside our building thinks. We have one goal and that’s winning the Super Bowl. At the end of the day, nothing else matters.”

That’s a refreshing approach to talent evaluation. Of course if things don’t pan out then there’s another issue. Yet, no GM or coach is right 100% of the time with players they draft no matter how much they like them. Mayock deserves some benefit of the doubt, albeit based on a small sample size of the 2019 draft. Still, the commitment to their plan, and the players they like, shows an organization in alignment.

Truth be told, most of us in the media affix grades to draft classes and even games. It’s a way to anecdotally convey to the reader, viewer or listener how well (or not) a team, player or organization did during a particular event. And since we’ve all been to school, the grade system is easy to understand and has been around a lot longer than I have.

Yet, for all its familiarity, it has some inherent biases when it comes to evaluating the draft.

The Raiders were ranked fourth from the bottom of 32 teams in a consensus ranking of media report cards for the 2020 NFL Draft. With most giving them a “C” grade and one New York-based writer giving Las Vegas a “D.”

The early pick of Damon Arnette (perhaps the most media-misinformed “reach” pick of the draft), and then the surprising true reach of the Raiders draft in Clemson’s Tanner Muse, seems to hold more weight with the NFL intelligentsia than the much larger upside in Henry Ruggs III at No. 12, the dynamic slash player in Lynn Bowden, Jr., the big WR in Bryan Edwards, and the small but mighty CB Amik Robertson.

In my opinion, the Raiders deserve a solid B or even B+. To see writers from around the country give them a C or C- (and even the one D) seems as though perhaps they’re not too familiar with some of the picks made by the Raiders so, therefore, dismiss them as “bad.”

That’s surprising when you consider many of these folks spend months and months evaluating draft picks. But, as Mike Mayock articulated bluntly – they don’t care what anyone thinks.

On Opinions and Evaluations

This time of the year we all take swags at evaluating players and teams to gauge where they may be heading toward the abbreviated offseason workout period. The mock drafts, the letter grades, the hot takes on college kids trying to make in in the NFL, are all part of the guessing game that comes with looking ahead in any sport.

When being live on the radio during the first round of the draft this year, I gave my opinion about the Raiders taking Damon Arnette at No. 19. I said it was a reach. I also said the Tanner Muse pick made no sense to me at all. Those are just my opinions, which I am obliged to give both being a sports radio talk show host and as a writer. Does my opinion matter to Mike Mayock or Jon Gruden? Probably not.

Yet fans and listeners like to hear what you’re thinking – at least most of them. I had a lot of social media interactions where some in Raider Nation will only heap praise on their team’s draft pick and if you dare question the legitimacy or talent level of a pick, you’re wrong.

“When you become a GM of an NFL team, then your opinion will matter,” said one Raiders fan on Twitter.

“I think Mike Mayock and Jon Gruden are better talent evaluators than three guys who talk on the radio,” another posted to me.

If you’re a Raiders fan, you better hope to God that last one is true.

Still, being critical isn’t always a negative nor should you dismiss it. You can disagree, sure, but to dismiss an opinion or take based on the host/writer not playing professional football or serving as the GM of an NFL is ludicrous. That’s the equivalent of saying a White House correspondent can’t comment or cover the President of the United States because they were never the President of the United States.

Debating what’s best for the hometown team is what being a fan is all about. Whether it’s the coach’s selection of a starting lineup, the team’s use of a particular player, or who the GM drafted, are all how we stay engaged with what’s happening and express our unique points of view.

Disagreement is OK and you don’t have to do it by telling the other person they’re wrong, stupid, or unqualified. That’s usually the sign of someone who can’t defend their own position.

A Bittersweet Weekend for Las Vegas

The opening shot of NFL Draft coverage across three networks was of the empty famed Las Vegas Strip. The introduction started lamenting how everyone should have been there for the physical draft and the ensuing four-day party that accompanies it.

I was happy to hear the NFL award the draft again to Las Vegas in 2022. For reasons out of our control, the draft wasn’t to be here this year. The revenue, jobs, and ability to show those doubters that Las Vegas is indeed becoming an NFL home team town were lost. More than anything, it was a stark reminder to those that live here how bleak things are.

Our governor Steve Sisolak has yet to articulate any sort of plan for reopening our economy or reason for general hope, so the NFL Draft, and it’s turning the spotlight on our struggling city and state were nice and heartbreaking at the same time.

With over 26% of the state out of work, it was a love/hate relationship. We loved it because it was football, live sports and the Raiders are making noise. We hated it because it reminded us how we went in a period of a week from the biggest booming economy in the nation to the most decimated economy.

Las Vegas and its melting pot citizens will emerge – as we always do – from the big struggle. The Great Recession, the 1 October shooting, and now the COVID-10 epidemic – nothing keeps Las Vegas down for long.

Closing the Book on the 2020 NFL Draft

Our post-draft recap of the Raiders 2020 NFL Draft included our discussions with Just Pod Baby’s Evan Groat and our own Sr. NFL Columnist/Bleacher Report contributor Moe Moton. They give us their thoughts on the Raiders picks and I tell you why I believe QB Derek Carr will have a huge year in 2020. Listen and subscribe below: