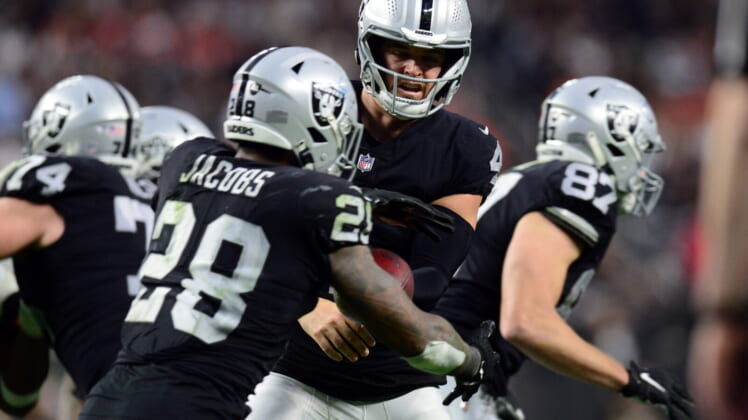 Just when we thought the Las Vegas Raiders season would end in utter despair, they find a way to win another low-scoring battle that may not please everyone but keeps their playoff hopes alive.

In Sunday’s 17-13 win over the Denver Broncos, the Raiders put together their best rushing performance led by running back Josh Jacobs, who tied his career-high in rushing yards (129).

With about two minutes left in the first half, Jacobs lost a fumble, which allowed the Broncos to move the ball into Raiders’ territory and kick a 55-yard field goal before halftime. When given the open forum to suggest adjustments, many fans wanted the coaching staff to bench Jacobs in favor of Peyton Barber.

Jacobs almost fumbled in the second half, but the referees ruled him down first. He held his composure and had one of his best outings, averaging 4.8 yards per carry.

The Raiders offense had a tough challenge against a defense that gives up the fewest points and ranks sixth in yards allowed, but quarterback Derek Carr spread the ball among Hunter Renfrow, Zay Jones, DeSean Jackson and Foster Moreau, all of whom caught at least three passes. With that receiving group, he engineered a touchdown drive, racked 201 yards through the air and iced the game with a 28-yard completion to Moreau on the final drive.

In complementary fashion, the Raiders defense stuffed the Broncos’ ground attack, holding them to just 18 yards without run-stuffing nose tackle Johnathan Hankins, who missed the game with a back injury. Vegas turned the ball over three times, but its defense kept Denver off the scoreboard for all but one quarter.

Once again, the Silver and Black pulled out a win that didn’t appeal to casual sports fans who prefer to see a lot of points on the scoreboard. But let’s remember, this offense didn’t have star tight end Darren Waller or starting wide receiver Bryan Edwards, who scored the Raiders’ only touchdown against the Cleveland Browns last Monday.

Vegas snapped a three-game losing streak at Allegiant Stadium with a depleted offense and a maligned front line and defined a clear path to the postseason. The Raiders have a simple objective—win and they’re in.

Going into Week 17, Vegas holds the No. 9 seed, two spots out of a wild-card spot. Fans expressed their confusion with the team listing behind the Baltimore Ravens, whom the Raiders beat in the season opener.

However, none of that matters if the Raiders win their next two games against the Indianapolis Colts and Chargers because they would erase the tiebreaker loss to Los Angeles, enabling them to leapfrog Baltimore via head-to-head victory.

Interestingly, what seemed like a third consecutive post-Thanksgiving collapse looks a little different now. Despite everything that’s happened this season with Jon Gruden, Henry Ruggs, injuries, COVID-19 and losing streaks, the Raiders control their fate with two games left on the schedule.

In order to clinch a postseason berth, Vegas has to knock off a couple of playoff-caliber squads. If the Raiders make the cut, they would’ve certainly earned it.

The Raiders have to muddy their games because they don’t have the firepower to score 30-plus points as they did earlier in the season.

Sure, they beat a couple of backup quarterbacks over the past two games, but they haven’t allowed running backs to go up and down the field on them. Aside from a 24-yard run, Nick Chubb logged 22 carries for 67 yards and a touchdown. As mentioned above, the Broncos’ dynamic rushing duo that features Melvin Gordon III and Javonte Williams rushed for just 18 yards.

The Raiders will face Colts running back Jonathan Taylor, who leads the league in rushing yards (1,626) and touchdowns (17). He’ll present the most formidable challenge on the ground, but if the front seven can slow him down a bit, Vegas’ 11th-ranked pass defense should be able to limit quarterback Carson Wentz through the air.

Like the Raiders’ last two games, the team that imposes its will in the trenches likely walks out of Lucas Oil Stadium with a win and playoff hopes intact. Prepare for a buckle-your-chinstrap type of battle.