Raiders Only Show What They Really Are: An Incomplete Team in Rebuilding Process 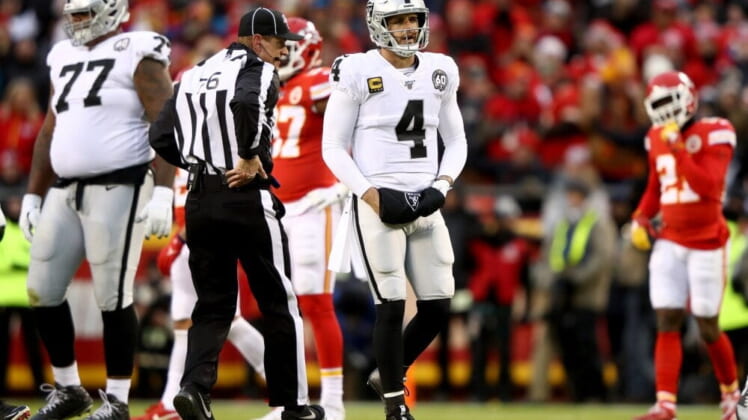 KANSAS CITY, MISSOURI – DECEMBER 01: Derek Carr #4 of the Oakland Raiders reacts against the Kansas City Chiefs during the second quarter in the game at Arrowhead Stadium on December 01, 2019 in Kansas City, Missouri. (Photo by Jamie Squire/Getty Images)

Despite becoming seemingly media darlings overnight, and getting beleaguered Raiders fans hopes up, no one should be surprised with the team’s struggles in 2019.

One of the first lessons I learned as a kid was one my grandmother taught me. I wanted to buy some cheap toys at the time and the price was off the charts cheap. It sounded good, it looked good so my immature self was ready to plunk down the money she had given me.

“If it looks too good to be true, it probably is,” she said.

The same could be said for the Oakland Raiders after their second-consecutive blow-out loss in Kansas City yesterday. A 40-9 drubbing dropping their record to a still respectable 6-6.

What we saw Sunday was what the Raiders are: a team with promising young talent, improving play on defense, a lack of playmakers at the wide receiver position, and a quarterback who cannot win against the team’s key rival for at least the next five years.

Perhaps everyone – the team, the fans, the media – were all set up for a disappointment. Talk of this being a game with the AFC West division championship on the line, and the fact the game was flexed in the NFL television schedule to be shown to a majority of the nation, built it up too much. After all, the Raiders hadn’t won in Kansas City since 2012 when Carson Palmer was their quarterback and Dennis Allen their coach.

What we saw Sunday was what the Raiders are: a team with promising young talent, improving talent on defense, a lack of playmakers at the wide receiver position, and a quarterback who cannot win against the team’s key rival for at least the next five years. We’ll get to Derek Carr later.

For all the angst, anger, and Twitter outrage over these past two losses, the Raiders have improved by two games over 2018 and they have four left to play. They have the league’s top rookie class led by 1000-yard rusher Josh Jacobs, defensive surprise Maxx Crosby, cornerback Trayvon Mullen, tight end Foster Moreaux, and injured safety Jonathan Abram. There is so much to be excited about when it comes to the team’s future in Las Vegas.

Yet, the here and now is a mixed bag of spotty play where this team can look great and then completely flip the script and look like the Raiders of the past two decades. I’ve said since the draft this team would take two steps forward and one step back all season. The advice: don’t get too high when things go well and don’t get too dejected when things go horribly wrong. That’s seemingly a tough pill for Raiders fans to swallow.

The Raiders also have to understand where they are with Carr.

Carr is a good man, a good quarterback and everything you’d want in a Raider. Despite that, and being an efficient and sometimes electrifying quarterback, he simply can’t beat the team’s most important rival on the road.

Carr is now 2-10 vs. the Chiefs overall since taking over the Raiders in 2014. That includes being swept during Carr’s near-MVP season in 2016. You know from the conversation this week Carr has never won at Arrowhead. According to Carr himself, it has nothing to do with cold weather.

“No, I threw the ball fine,” Carr said during the postgame press conference. “It felt great. If we don’t have those two turnovers, we are very efficient.

“I think we handled it just fine. It was not a factor because I don’t want to take anything away from the plays that they made, to be honest with you. They made two great plays. If it was 80 degrees or 30 degrees, it does not matter.”

This is disappointing, but I know where we are. I know where (the Chiefs) are as a football team. We have work to do, and we are going to continue to try and catch the Chiefs. – Jon Gruden on state of his young Raiders team

The Carr-polarized fan base will continue to be so until the quarterback can quiet critics with winning play on the field. That didn’t happen yesterday even though he wasn’t the single reason the Raiders got hammered.

“This is disappointing, but I know where we are,” Gruden said. “I know where (the Chiefs) are as a football team. We have work to do, and we are going to continue to try and catch the Chiefs.”

Whether or not they can with Carr at the helm can only be known with time. And Carr will have more time. Sources close to the situation make it clear Raiders owner Mark Davis believes in Derek Carr and any change in direction would have to come from him.

Lost in the malaise in the cold of KC was the performance if the Raiders defense. Yes, it was bend but don’t break and the Chiefs made some big plays. Still, they did a very good job of containing Mahomes who only passed for 175 yards. The Raiders offense and its turnovers led to 14 points and costly penalties on the defense – particular in third-and-long situations – also allowed the Chiefs scoring chances they cashed in.

The offense needs to get better but how much can they with a dearth of talent and playmaking ability at wide receiver and an offensive line showing some wear and fatigue?

The bottom line is the Raiders are building for the long term. Some short term progress may rear its head at times but the reality of what the team lacks will also. As much as fans want to win now, delaying instant gratification is the right thing for this team as it’s just a few months away from arriving in Las Vegas.

Building a winner the right way takes patience and a plan that you must anchor yourself to. The Raiders are getting better but they’re an incomplete team. Fans need to accept that and embrace the future vs. wanting a winner in the present.

They call it growing pains for a reason.