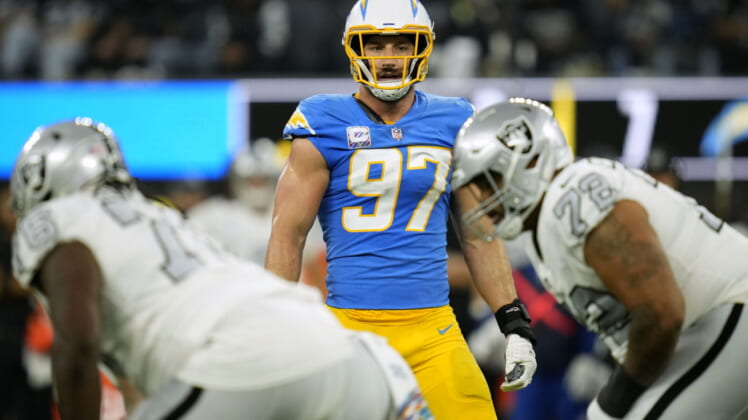 Entering the beginning of the season, the Las Vegas Raiders offensive line welcomed three new players. During training camp, that number increased to four after left guard Richie Incognito suffered a calf injury that continues to sideline him this week.

In Week One, that number grew from four to five when Denzelle Good, who was one of the three new starters entering the season, tore his ACL in the first half against the Baltimore Ravens.

Exactly three weeks later, the Raiders faced their first AFC West divisional opponent of the season on the road against the Los Angeles Chargers.

The Raiders O-line was challenged by a Chargers’ defensive unit led by Joey Bosa, who recorded one of Los Angeles’ three sacks and hit quarterback Derek Carr twice. This comes as the offense could not muster a single yard in the first quarter, let alone a single point in the first half.

With left tackle Kolton Miller as the longest-tenured player on this offensive line, opponents have been attacking from the left guard to the right tackle position in the pocket. And it shows in the O-line’s individual Pro Football Focus, or PFF, grade.

The rookie Leatherwood, who has only played in four games, is adjusting to the NFL and the speed at this level. However, Carr said he has seen similarities in Leatherwood that Miller experienced when he was a rookie in 2018.

“Oh absolutely,” Carr said. “The hard part about some of positions that some guys play in football, whether it is quarterback or tackle, corner, we always remember that one play and not one play ever breaks a game. Everyone looks at the end and says, ‘That’s the one.’ Well, there’s 13 other plays that if we just executed, it wouldn’t even have mattered.

“It’s sounds so cliché, but it’s so true. Yeah, he maybe gave up one or two plays there, but I also saw him a couple other times slamming some dudes on the ground, especially some dudes that were talking. I see the same characteristics in Alex that I saw in Kolton is they stay quiet and when they go on that football field, it’s all business.”

This week doesn’t get any easier for the O-line as Raiders (3-1) host the Chicago Bears (2-2), who have allowed the lowest number of first downs and rank tied for second with the New York Jets with 16 sacks through the season’s first four weeks.

The Bears’ defensive front is led by former Raider linebacker Kahlil Mack, who was traded to Chicago in 2018.

Looking back on that trade, the Raiders got two first-round picks in defensive end Clelin Ferrell and running back Josh Jacobs, in addition to 2020 third-round pick that became wide receiver Bryan Edwards. The Raiders ultimately also received a 2021 sixth round pick, which was traded up for a fourth-round pick in safety Tyree Gillespie.

Carr said he misses the character that Mack brought to the team but also likes the players the team brought in.

“I miss him,” Carr said. “I love that guy to death, more so the person. He was a great guy to be around, great teammate. That trade definitely broke my heart, but we got a lot of good players from that trade and some good teammates, good dudes.

“That’s not me loving him and missing him has nothing to do with the guys that we have here because I love these guys too. He’s one of my best friends but I can’t wait to see him because I’m not going to talk to him the whole game.”

The 6-foot-3 quarterback said Mack is not only the player to watch on Chicago’s defensive front.

“They’ve got a certain edge rusher, who’s pretty good,” Carr told the media Wednesday. “But they also one on the other in (linebacker) Robert Quinn, who’s a heck of player. He’s been a big sack guy in the NFL. Outstanding speed and get-off.”

One thing that works in favor for the Raiders heading into this week is that they have Carr, who leads the NFL in passing yards.

Carr said that this game will be difficult, but the team will have the motivation after a loss.

“It’s one of the more challenging defenses we’ll face all season, and you love that, especially coming off a loss,” Carr said. “Your eyes get open a little bit to some things that we could’ve done better and you get excited for the challenge that is out in front of you next time and we get to do it at home, so that’s good too.”

The Raiders and Bears face off on Sunday afternoon at 1:05 p.m. inside Allegiant Stadium.

The Raiders announced Wednesday that they have signed CB Brandon Facyson from the Los Angeles Chargers’ practice squad.

Facyson, a 6-foot-2, 197-pound cornerback, originally entered the league as an undrafted free agent with the Chargers in 2018. In 44 appearances with four starts for the club, Facyson has recorded 35 tackles (31 solo), one pass defense, one forced fumble and two fumble recoveries.

Additionally, the club has designated CB Keisean Nixon to return from the Reserve/Injured List.