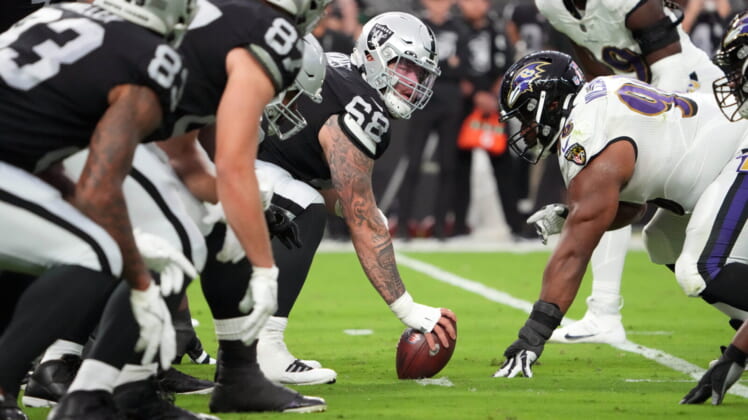 In sports, winning can quell concerns for the most obvious weaknesses. The Las Vegas Raiders rode a high through a 3-0 start and had to face a harsh reality in a loss to the Los Angeles Chargers. Quarterback Derek Carr’s performances masked multiple issues on offense—from the play-calling to subpar blocking in the trenches from the Raiders offensive line.

On Tuesday, head coach Jon Gruden accepted fault for his questionable play-calling and acknowledged the Raiders offensive line and its struggles early in games.

The Raiders had these issues before they stepped on the field at SoFi Stadium though. Vegas has difficulties finishing drives with six points, which has become a perpetual problem under Gruden. The offense currently ranks 20th in red-zone scoring. That has a lot to do with the performance of the Raiders offensive line.

A poor Raiders offensive line can ruin any game plan. Without a serviceable unit, teams will usually struggle with pass protection, the ground game, big plays and scoring opportunities. We saw the adverse effects Monday night.

While it’s too early to panic over a relatively young Raiders offensive line that lacks experience, the Raiders must consider some backup plans for their five-man front in case the group doesn’t show moderate improvement in the second quarter of the season.

We’ll examine harsh realities and offer potential solutions for some of the issues across the Raiders offensive line.

Think back to the Raiders’ 2016 campaign. The Raiders fielded one of the best offensive lines in the league with three players who made the Pro Bowl that year in left tackle Donald Penn, center Rodney Hudson and left guard Kelechi Osemele, who also earned an All-Pro nod.

From Week 5 onward, Denver Kirkland, a 335-pounder, lined up as an inline tight end alongside Austin Howard, who had arguably been the weakest link among the team’s 2016 starting offensive linemen. The former served as a sixth blocker at the line of scrimmage for 127 snaps, per PFF.

In order to help rookie right tackle Alex Leatherwood, Gruden should implement a similar look with Foster Moreau. He doesn’t have a massive frame like Kirkland, but the 6’4″, 250-pound tight end built a reputation for his blocking skills at LSU. While fans may want to see him catch more passes, the Raiders absolutely need his help as an inline tight end with Derek Carrier battling a pectoral injury. Nick Bowers hasn’t played a regular-season snap, so he’s not reliable in that role.

Carr has already taken 12 sacks behind the Raiders offensive line. Though he’s durable, the eighth-year veteran isn’t invincible. Most importantly, if he goes down with an injury, Nathan Peterman and oft-injured quarterback Marcus Mariota wouldn’t be able to match his mastery of Gruden’s offense. The Raiders must do whatever it takes to protect him.

This reality sounds so obvious, but a portion of the fanbase has already labeled Alex Leatherwood a bust, which is premature for a first-year player who didn’t play at his current position on the collegiate level.

As a starter at Alabama, Leatherwood played right guard during his sophomore term and then moved to left tackle for the following two seasons. He’s not a natural right tackle, so the 6’5″, 312-pounder may need a lot time to develop.

New York Jets tackle George Fant, who has experience at left and right tackle, compared the transition to a pitcher throwing with his non-dominant hand:

Here’s the issue. The Raiders offensive line may not have time for Leatherwood to go through an extended developmental period if he continues to allow pressure at an alarming rate on a squad that plans to push for a playoff spot.

The coaching staff likely expected Leatherwood to go through early rough patches, so they need to help him with premier edge-rushers, which is why Gruden should use Moreau as an extra blocker on the strong side of the formation to help the Raiders offensive line. Don’t leave the rookie on an island with Justin Houston, T.J. Watt or Joey Bosa while he’s learning on the job.

While the coaching staff should stick with plan A and allow Leatherwood to take his lumps, the rookie first-rounder can possibly play guard. He has collegiate experience on the interior with the size and power to open lanes for ball-carriers, which may help Vegas’ underwhelming 27th-ranked ground attack.

Per Vincent Bonsignore of the Las Vegas Review-Journal, Leatherwood took snaps at right guard while Brandon Parker took reps at right tackle during the early portion of Thursday’s practice for the Raiders offensive line.

If the Raiders shuffle the offensive line, moving Leatherwood inside, they should acquire a swing tackle while Parker tries to solidify a spot in the starting lineup. Though it’s not ideal to shift linemen in the middle of the season, the club may be able to strengthen its pass protection with a natural right tackle.

Parker has experienced his fair share of lapses in pass protection in the past, but he may show signs of growth in a contract year. For quality veteran insurance, the front office can take a look at right tackle Rick Wagner, who played well in nine starts for the Green Bay Packers in 2020, allowing just three sacks in 756 pass-blocking snaps, per PFF.

Harsh Reality: Don’t count on Richie Incognito to play much this season

Richie Incognito hasn’t played a down on the Raiders offensive line since September of the 2020 campaign. Last year, he missed 14 games with an Achilles injury. Back in August, the 38-year-old strained his calf and went out on injured reserve a couple of weeks ago.

The Raiders can open the window for Incognito’s return to practice after Week 5, but Gruden called him a “work in progress” without a firm update on his condition.

Incognito brings the nastiness that the Raiders need, especially on run downs, but he’s probably not going to play much football this season. At his age, with lingering injuries, the four-time Pro Bowl guard doesn’t seem to have a lot left in the tank because of the physical wear and tear on his body.

The Raiders need reinforcements at guard. They’re dangerously thin at the position with Incognito on injured reserve and Denzelle Good out of the season because of a torn ACL.

The team signed Jermaine Eluemunor a week before the season. When he missed a couple of series against the Chargers, Jordan Simmons filled the void at right guard opposite second-year guard John Simpson, who has just six starts on his pro resume.

As a 2017 undrafted product out of USC, Simmons has just nine career starts. He’s an unknown commodity, who could be a serviceable fill-in starter but may not offer much to elevate the ground game.

Vegas may want to add a guard who has quality starting experience even if he’s just a one-year rental in case Incognito doesn’t shake off the injury bug. As the trade deadline approaches, Gruden should make some phone calls and inquire about available guards.

While Andre James has struggled with his snap consistency, like Leatherwood, he’s not playing at his natural position.

At UCLA, James started at right tackle for two seasons and then moved to left tackle during his final collegiate term. Coming into the 2021 campaign, he had only played 116 regular-season snaps. The Raiders signed him to a three-year, $12.5 million extension, so they’ll likely attempt to coach him through the bumpy transition from tackle to center.

This past offseason, Vegas signed Nick Martin, who’s a better pass protector than a run-blocker, but he’ll probably remain on the sideline unless James suffers an injury.

Overall, Raiders fans want to see the team operate in win-now mode, but that doesn’t match the timeline of an offensive line in its infancy stages of development. Offensive line coach Tom Cable must get those guys up to speed quickly. If not, the unit could cost them some crucial games late in the season.