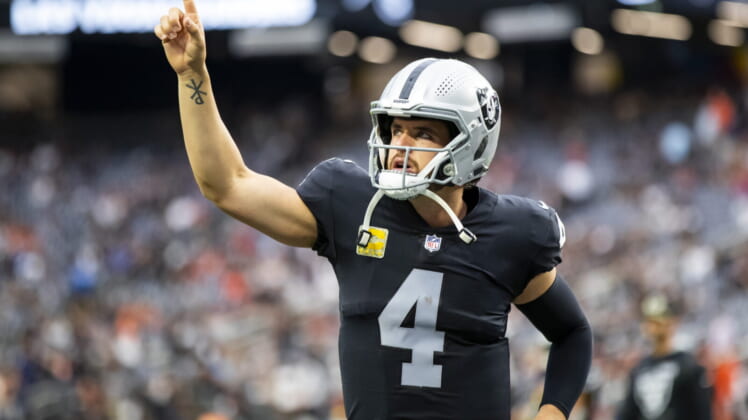 In Sunday’s game against the Cincinnati Bengals, the Las Vegas Raiders needed to air it out in certain situations, but instead, quarterback Derek Carr seemed hesitant to pull the trigger. The Raiders offense continues to be the albatross around the neck of Rich Bisaccia’s 5-5 team.

To anyone who hasn’t paid attention to the Raiders’ 2021 campaign, that sounds like the norm for Carr, but he played with aggressiveness for most of the year, and that style paid off when the team fell behind. We didn’t see that side of him in a 32-13 loss to Cincinnati.

Because of the defense, Vegas had a chance to pull out an ugly win, trailing by just a field goal early in the fourth quarter. The wheels came off instead of a comeback, and the Silver and Black lost its third consecutive game. For the third straight game, the Raiders offense looked uneven, unprepared, and unwilling to matter.

Looking at the box score, you’d think the defense had a terrible outing, but the unit only allowed 4.1 yards per play despite taking the field for 37:20, nearly two-thirds of the game. Defensive end Yannick Ngakoue forced a fumble that set the offense up at the Bengals’ 9-yard line, but the Raiders moved the ball just one yard and then settled for a field goal.

Once again, the Raiders offense struggled in critical situations, converting one of its three red-zone trips into a touchdown and going 1-for-7 on third down.

Before highlighting what went wrong, the Raiders checked one box, feeding tight end Darren Waller targets, which led to production. He hauled in seven passes for a season-high 116 yards, but that’s where the positives end for the Raiders offense.

Raiders offense continues to whiff on running the ball

For the first time in several seasons, the Raiders offense doesn’t have a viable ground attack, which is disappointing because they have a 2019 first-round pick in Josh Jacobs, signed Kenyan Drake to a two-year, $11 million contract and invested a 2021 first-rounder in offensive lineman Alex Leatherwood, who had a strong reputation as a run-blocker at Alabama.

Jacobs recorded an 18-yard gain, his longest run of the season, but other than that, we didn’t see much from the ground game.

Going into Week 11, we knew the Raiders offense didn’t pose much of a threat on the ground with their 28th-ranked rushing offense. They’re heavily reliant on moving the ball through the air.

Interim head coach Rich Bisaccia alluded to the conservative play on offense, which leads to questions about quarterback Derek Carr’s decisions in the pocket.

“They gave us some pressure, and we ended up playing into the check down game to some degree,” Bisaccia said during the postgame press conference. “And we got into some third-and-manageables, and we weren’t able to capitalize offensively.”

Earlier in the season, the Raiders offense benefitted from Carr pushing the ball downfield, but he seemed reluctant Sunday:

Carr completed nine passes to Jacobs and wide receiver Hunter Renfrow for a combined 54 yards. He connected with Waller for some big plays in the second half. Tight end Foster Moreau snagged a 19-yard reception for a score and as usual, Zay Jones had one big catch, but that happened late in the fourth quarter with a 29-13 deficit.

If Carr had been more aggressive early in the game, the Raiders offense may have been able to extend drives and put more pressure on the Bengals, who only outgained them by 10 yards.

Whether by design via offensive coordinator Greg Olson or not, the Raiders offense didn’t have a plan of attack that fully challenged the Bengals’ 24th-ranked pass defense.

When asked about Jackson, Bisaccia credited the Bengals for applying pocket pressure but also talked about the check downs.

“We had multiple packages for DeSean,” Bisaccia said. “I know he got more plays today…we thought we could get some big plays, some explosive plays out of it, but we just didn’t [because] a little bit pressure-wise to some degree, and when we stepped up, we ended up hitting some of the check-downs.”

Whether by design via offensive coordinator Greg Olson or not, the Raiders offense didn’t have a plan of attack that fully challenged the Bengals’ 24th-ranked pass defense. Though Carr leaned on Waller and rightfully so, he targeted Jacobs seven times, more than all the Raiders wide receivers combined. That’s not a winning formula.

The Raiders will stagger into the mid-afternoon Thanksgiving matchup against the Dallas Cowboys and try to avoid slipping below .500 for the first time this season. Win or lose, they’ll remain in the playoff picture mathematically, but a fourth consecutive defeat would feel like a November knockout blow.