Raiders offense opens up as Olson takes over 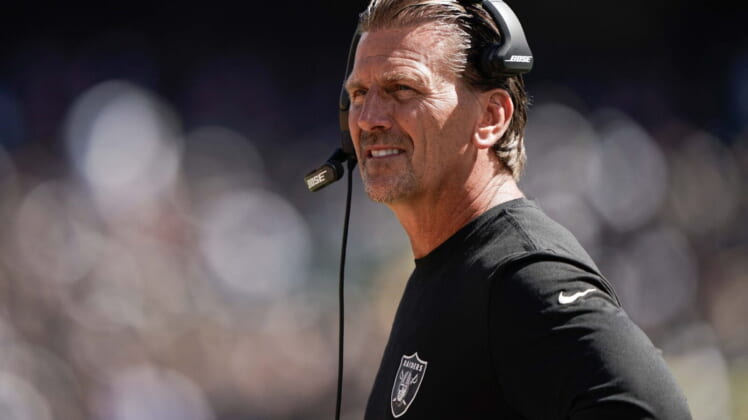 The Las Vegas Raiders were coming off an uncharacteristic week where their head coach resigned but in losing Jon Gruden they also lost their offensive play-caller. How would the Raiders offense respond to someone new at the helm?

Offensive coordinator Greg Olson became the offensive play-caller — something he hadn’t done in five seasons. Sunday was not the first time Olson had called plays for the Silver and Black, dating back to 2014 when Carr was a rookie.

Olson, interim head coach Rich Bisaccia and defensive coordinator Gus Bradley, who have a combined 71 years of NFL coaching experience, all pitched in to lead the Raiders to a 34-24 victory over the Denver Broncos and moved to a tie with the Los Angeles Chargers at 4-2 for first place in the AFC West.

“It was a really good dialogue between myself and (Olson), myself and Gus and talking to (running backs coach Tim Berbenich) about game management upstairs,” Bisaccia said after the game. “It was a real collective effort going through the game.”

After scoring just eight points in the first quarter through the team’s first five games, the Raiders matched that plus a couple more as Las Vegas closed out the opening quarter with a 10-7 lead, highlighted by a 48-yard touchdown by wide receiver Henry Ruggs on the team’s first drive.

That was the Raiders first touchdown on the opening drive in 12 games, dating back to Week 11 of last season.

A big reason for the quick start was the Raiders offense got on track utilizing running back Kenyan Drake. In Drake’s last two games against the Chicago Bears and the Chargers, the 6-foot-1 rusher combined for just three carries for 13 yards and no catches. Drake did have five kick returns for 103 yards between the two games but, for reasons unknown, Gruden wasn’t a fan.

Sunday was a different story as Drake recorded four carries for 34 yards and a touchdown. In addition, the 27-year-old caught two passes for 39 yards and a touchdown, totaling two scores on the day and his first two touchdowns as a member of the Raiders. The Raiders offense made use of all its weapons in the win against the Broncos.

Drake, who did not return a kick against the Broncos, said he focuses more on taking advantage of his chances rather than lamenting for low usage.

“I just try to make the most of my opportunities,” Drake said. “Whenever my number is called, whether it is in the return game, the pass game or the running game, I came here to make plays, so that’s what I hope to continue to do as the season goes on.”

Running back Josh Jacobs, who finished with 16 carries for 53 yards and a touchdown, recorded three of the four carries on the team’s first possession. But when Drake ran the ball on 1st-and-10 on the Las Vegas 44, it gave the Denver defense a different look, which led to the long 48-yard touchdown two plays later by the Raiders offense.

Drake, who came to Las Vegas to be a pass-catching running back, caught one pass in the flat for eight yards to begin the drive. Carr then found tight end, Darren Waller, on back-to-back completed plays for 43 yards with the second coming on second-and-10 at their own 36-yard line for 33 yards, getting all the way down to the Broncos’ 31-yard line.

That 33-yard play set up Drake on a go-route by catching a dime and ran into the endzone for a 31-yard score to take a 10-point, 17-7 halftime lead in a possession that lasted 31 seconds.

Although Carr has the ability to change a play at the line of scrimmage, Carr said Drake’s go-route was Olson’s suggestion as he fully utilized the tools on the Raiders offense.

“It was a called play,” Carr said. “That was on Oli. 100% on Oli. He wanted that matchup and luckily, we got the coverage we wanted. It was all him.”

Drake said today’s play-calling against the Broncos was easier for the players to understand and let the players play freely, especially having to deal with the events on Monday and Tuesday. Simply, the Raiders offense was simplier.

“He really made everything a little more simpler,” Drake said of Olson’s play calling. “We didn’t come into the week with a lot of drop backs, a lot of different things like that. He reduced the number of things that we had to worry about. We just went out and played ball. Other than that, it was the same offense, that isn’t going to change.

“(We’ve) got the same quarterback, got the same playmakers on our side of the ball, the defense went out there and did their job. So, it really had nothing to do with anything on the outside. We had to go out there and take of business and that’s what we did.”

Coming out of the first half, the third quarter proved to be no different as Drake found himself in the end zone for a second time Sunday, this one coming on an 18-yard touchdown run. It was the most active he has been in the Raiders offense since signing his two-year deal this offseason.

The Raiders second-half opening drive began with Jacobs running for a six-yard play followed by a 29-yard catch and run to get just outside the red zone at Denver’s 21-yard line. Two plays later, Drake extended Las Vegas’ lead to 24-7 with 11:33 remaining in the third quarter in a possession that lasted 1:53. The Raiders offense just flowed better and seemed to operate more efficiently thanks to the simplified approach by Olson.

Drake, Jacobs and the Raiders return home next week to face the Philadelphia Eagles on Oct. 24 at 1:05 p.m. inside Allegiant Stadium.