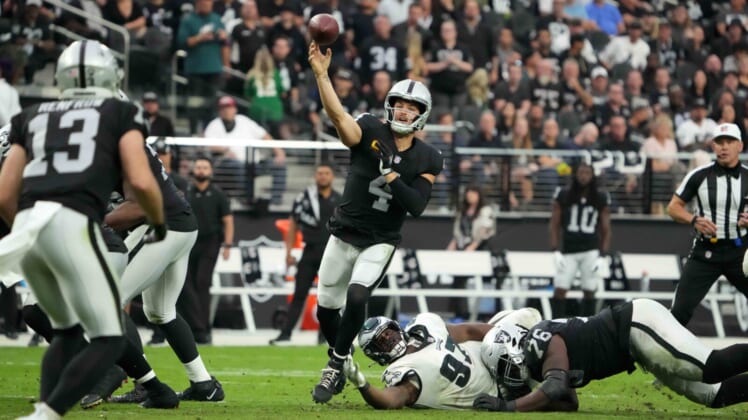 In consecutive games, the Las Vegas Raiders offense has scored 33-plus points in regulation as offensive coordinator Greg Olson’s approach seemed to provide a much-needed spark over the last two weeks.

Gruden deserves credit for putting quality offensive pieces around quarterback Derek Carr. After all, he called the shots and the plays for the club. Wideout Henry Ruggs III had shown improvement before Olson took over the unit. Going into Week 7, he led the Silver and Black in receiving yards (445). Hunter Renfrow has become one of the league’s most reliable slot receivers.

With that said, role players who had been inconsistent under Gruden filled in adequately for two of the team’s top offensive playmakers in Week 7.

On Sunday against the Philadelphia Eagles, the Raiders offense took the field without star tight end Darren Waller, who suffered knee and ankle injuries during practice this week. Running back Josh Jacobs didn’t play in the second half because of a chest injury.

In the absence of Waller, tight end Foster Moreau caught six passes for a team-leading 60 yards and a touchdown. Coming off his best game as a Raider, Drake kept the ground game going in the second half, finishing with 14 carries for 69 yards and a score. At one point, he moved a pile of human bodies for a few extra yards in the Eagles red zone.

Aside from Waller, the Raiders offense and pass-catching group didn’t garner much buzz this offseason. Ruggs and fellow second-year wide receiver Bryan Edwards, who caught three passes for 43 yards and a touchdown against the Eagles, came into the season as major question marks because of their underwhelming rookie campaigns.

Though Moreau bounced back from a torn ACL to play in every game last season, he fell behind now-retired tight end Jason Witten on the depth chart. Before Sunday’s game, he hauled in just four passes for 53 yards and a touchdown for the season.

When called upon to fill expanded roles, Drake, Moreau and Edwards all reached paydirt as the Raiders offense built a healthy lead on the Eagles, scoring 30 of their 33 points between the second and third quarters.

The Raiders offensive line has collectively taken steps in the right direction over the last two outings. Carr didn’t take a sack in Sunday’s game—the first time that’s happened all season. Vegas rushed for 119 yards and two touchdowns on 29 carries. Clearly, the unit has performed better than it did in the first four weeks of the season. Carr’s clean jersey along and more production out of the ground game provide the proof for that claim.

Contrary to popular belief, the Raiders offense isn’t Waller-centric. He hasn’t eclipsed 59 receiving yards in a contest since Week 2. Moreau isn’t as dominant, but he commands attention in the passing game with his reliable hands.

While Jacobs has been the Raiders lead ball-carrier since 2019, he’s limped off the field several times because of minor injuries. Now, even without him, Olson doesn’t have to use the short passing game to replicate the ground attack. Carr can hand the ball off to Drake 12-16 times as well. The Raiders offense works just as well with him as it has Jacobs.

Drake is a one-cut downhill rusher who hits holes with urgency and keeps his legs churning, which is why he’s a viable red-zone threat, scoring nine of his 10 touchdowns inside the 5-yard line last season with the Arizona Cardinals.

Heading into a bye week as the top team in the AFC West, the Raiders should feel a sense of confidence (not complacency) in themselves. The Raiders offense (and a much-improved defense) is a big part of why.

Despite losing their chief decision-maker, team leader, and offensive play-caller, they flipped consecutive losses into back-to-back wins with two of their most complete performances of the season. With the exception of allowing a touchdown to Philadelphia on a game-opening drive, Vegas has mostly been in control for the last eight quarters of its season.

More importantly, after a couple of rough outings, Carr has performed at a high level. In Week 6, he threw for 341 yards and two touchdowns. Against the Eagles, he recorded 323 passing yards, two touchdowns and an interception with a 91.2 percent completion rate, good for the second-highest all-time completion rate for a quarterback with at least 30 pass attempts. Carr has the Raiders offense cruising along and it’s meant two consecutive complete games for him and his teammates.

With a potent offense full of playmakers and a solid defense that consistently pressures the quarterback, the Raiders have enough balance to sustain their momentum after the bye week.