Raiders offense looks to capitalize on depth and versatility 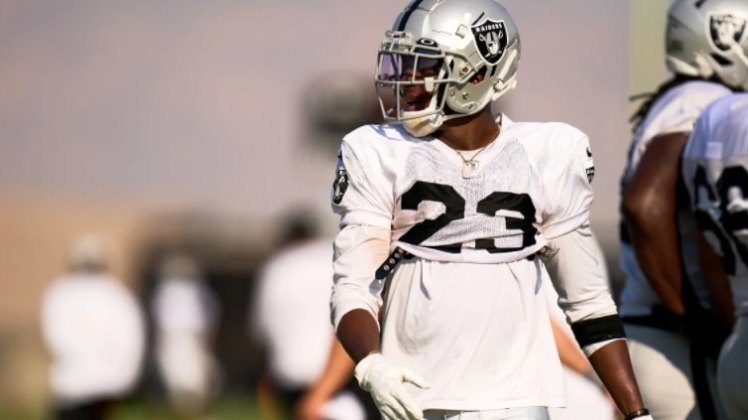 The Las Vegas Raiders offense looked to add depth and versatility to an already well-heeled unit during the offseason. Las Vegas focused on starting at running back to start with the signing tailback Kenyan Drake to support Josh Jacobs, who has yet to play a full season due to injuries. That signing, says the player himself and coach Jon Gruden, was a perfect fit for both sides.

Drake, 27, is entering his sixth NFL season and has split time between the Miami Dolphins and Arizona Cardinals.

The history of the 6-foot-1 running back, said head coach Jon Gruden, makes him thrilled he’s part of the Silver and Black this season.

“His abilities and pedigree speak for itself,” Drake said of Gruden on Wednesday discussing one of the new weapons for the Raiders offense. “Obviously, last year, they had a pretty good offense. Adding me and few other pieces through free agency and the draft, I feel like he’s looking at this offense to continue to that same trajectory into this season. (I’m) excited about the way he’s using me, personally, but the whole offense in general.”

Last season in Arizona, Drake started 13 times and accumulated over 1000 total yards (955 rushing yards and 137 receiving yards) to go with 10 touchdowns. Adding those numbers to the Raiders offense in 2021 could be a massive jolt to an already explosive offense.

Drake said training camp is a good opportunity to learn and build chemistry with Jacobs, quarterback Derek Carr and the offensive line, especially for a player in his first season with a new organization. He likes what he sees from the Raiders offense and thinks his arrival will only help the unit do better in 2021.

The first-year Raider said Carr’s football mentality is superb, only seven days since the first day of training camp.

“I didn’t really know too much about him before I came here,” Drake said of Carr. “He’s real cerebral. Gruden gives him the keys and allows him to make the necessary checks. Obviously, there’s a specific play that goes in initially, but if there’s a look that Derek feels is advantageous to us making a big play, he’s going to check it and get us into that play.

“That’s something I definitely admire about his abilities, aside from the physical (abilities) because he’s a great quarterback and has a great arm. I’m going to continue to be impressed by him day in and day out.”

During practice Wednesday morning, Carr found wide receiver, Bryan Edwards a couple of times that showed off his athleticism and strong hands.

Carr said completing those passes to the second-year receiver out of South Carolina gave him flashbacks to his days at Fresno State with now-Green Bay Packers wide receiver Davante Adams. It’s the possibilities Edwards brings to the Raiders offense that gives the QB flashbacks to his college days.

“He reminds me a lot of Davante (Adams) when he first came into college,” Carr said of Edwards. “(Adams) was redshirting, but I wanted to throw him every pass, even though we were getting ready for games. I’d still throw his rep. It was the same thing with Bryan when he wasn’t starting. I was still trying to throw his rep every day in practice.”

Wednesday marked the second day, with the players practicing in pads. The Raiders offense looks already to be a well oiled machine but Carr likes the intensity of this camp.

Carr said the coaches have ensured that the workouts will be physical, and players will have to press through to embrace the grind.

The 6-foot-3 quarterback said the energy from both lines helps build his adrenaline rush, even if that means taking a hit.

“It is a live rush until they step away from me, then they back off,” Carr said. “I had a guy run into me and I thought coach Gruden was going to lose his mind. What that tells me is that those guys are competing. Those pockets, I’m having to move and play football. That’s good for everyone. You have to be able to throw balls when you’re moving.”

Carr and the Raiders offense had a banner year last year finishing eighth overall despite a late-season swoon.

Raiders offense: No Waller, no problem

Tight end Darren Waller has missed the past two days of practice but it doesn’t seem to impact the Raiders offense much.

Despite Waller’s absence, Carr said it opens up other opportunities and puts guys in situations they could be during the season, such as wide receiver Henry Ruggs.

“When Darren’s out there, I’m checking plays to get him the ball,” Carr said. “When he’s not out there, it’s fun for me and Gruden because I’m checking plays to get someone else a look. ‘Alright, you’re one-on-one. Let’s see if you can do it.’ Yesterday, we saw Henry step up big time on some down-the-field type plays and even across the middle today.”

With or without Waller, Carr is using this time to evaluate the Raiders offense and players in particular situations, especially with all of the options the team has both at running back and wide receiver.

“Oh yeah, absolutely, very diverse,” Carr said of the offensive weapons. “Can’t forget about (running back Jalen Richard). He’s caught about 50 choice routes for us. Josh, out of the backfield, when he gets a ball in his hands anytime, there are so many check-downs I throw to him that turn into 16-yard gains. Now we have Kenyan, who was a receiver. He can run those routes. And then Alec Ingold. He is making plays down the field.”

The Raiders offense looks to get much more help from a better Raiders defense under new defensive coordinator Gus Bradley.