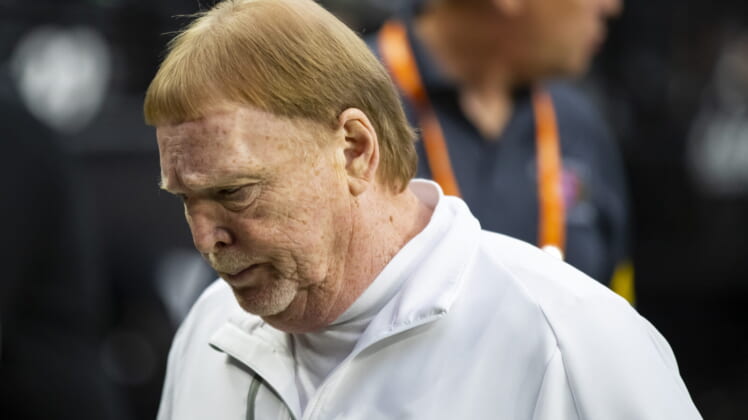 The profoundly intense rivalry between the Las Vegas Raiders and the Kansas City Chiefs is one of the most historic in all of football. These three former American Football League foes don’t need much motivation when they meet twice per season as AFC West foes. The dislike is natural, it’s historic, and it’s well documented.

Why the Raiders, a team who had lost four of their last five games, decided it was time to amp up the rivalry more by having an impromptu (or was it?) team rally on the Chiefs midfield arrowhead logo shows a lack of focus, understanding, and overall leadership which has plagued the faltering team in 2021.

And, yes, I know the logo flap didn’t have a ton to do with the 48-9 embarrassment slapped on the Raiders by the superior Chiefs squad. The Chiefs didn’t make it a big deal. That’s because they didn’t need to. They acted professionally.

It showed a lack of maturity and situational awareness by the Raiders and their so-called leaders on the field. It was inexcusable, ill-advised, and all the evidence you need owner Mark Davis needs to make profound changes, yet again, inside the organization.

While others dismiss it as no big deal, it points to all I’ve mentioned above.

While the Raiders media pool failed to ask interim head coach Rich Bisaccia about the 50-yard line logo incident after the game, at least one journalist asked the last-second question to quarterback Derek Carr about the incident. His answer was revealing and troubling.

It’s time for Carr – who deserves a shot to see what he can do elsewhere – and the Raiders to part ways.

As an eight-year veteran and the team’s captain and leader of the offense, that’s your cop-out of an answer? There’s a way to admit it was a mistake and hold your team (including yourself) accountable without throwing guys under the bus. Carr’s “non-answer” answer was a failure in leadership. It shows why players talk about a lack of focus and direction when the team hits the field.

It’s the same sort of non-answer that got Carr criticized by some (and led to some alleged team friction) in 2017 when he wouldn’t join his team in kneeling during the National Anthem at a game in Washington that season. That was a much more complex issue than he faced in Kansas City on Sunday.

Part of me feels for him. How many years can you stand before the media and answer questions about teams collapsing when it matters most? How can you answer questions about an organization that continues to fail to build a team capable of sustained winning? It can’t be easy, and it has to be weighing on Carr. Who knows, his window to win a championship is on the back nine of his career.

I said this on our radio show this week, and Sunday’s game just strengthened my point. Unlike many who dislike Carr, that’s not why I assert an amicable divorce is necessary. It’s time for Carr – who deserves a shot to see what he can do elsewhere – and the Raiders to part ways. Carr deserves better and whoever will be the Raiders’ new GM and head coach deserves to build around a quarterback who will be a massive part of the team’s future.

Raiders need leadership on and off the field — fast

Overall, looking at the failures of leadership with the football side of the operation, it becomes apparent Mark Davis must clean house. For the long-suffering fans of Raider Nation, they’ve been here way too many times. I feel for them the most, but it’s not working right now and Davis has to make bold moves if this franchise wants to move forward.

The constant churn of the later Al Davis years, coupled with the lack of success and turnover since that time under his son Mark, is unfortunate. Mark Davis wanted to bring stability to the Raiders, so he signed Jon Gruden to a 10-year, $100 million contract. We all know how that ended up. That wasn’t Davis’ fault and it’s admirable that he committed to the time and dollars. But here we are — back where the organization started.

Signs of dysfunction and a lack of discipline were there even under Gruden. The late-season collapses, the off-the-field (and COVID protocol) slip-ups, misses in the draft, and bad trades and free-agent acquisitions are how we got here.

It all points to a lack of leadership at all levels of the football operation. Davis has his hands full and must spend his time executing searches for these critical positions between now and the Super Bowl. And as much as I like Mike Mayock, he’s left holding the bag on this thing and it’s hard to see him survive. As loyal as Davis can be, I don’t see him retained.

Perhaps Davis will have to make the most challenging and crucial decision regarding Carr. It’s no secret within the organization how much Davis loves Carr. He’s a loyal owner. Yet will he commit to a quarterback for the next five years and pay him $40 million a year? A quarterback who has elite talent yet a sub .500 record? A quarterback who tails off as the season progresses during every single year of his career?

Derek Carr isn’t the only reason the Raiders are in a tailspin again. It’s a team game and every man who wears, or coaches for, the Silver and Black shares in the result. Yet the NFL is a quarterback-driven league and where teams spend the most money. Carr deserves his next big contract and the Raiders need a QB to build a consistent winner.

Unfortunately, I think the best way for both sides to flourish and get what they want is to go their separate ways.

Fresh starts can do wonders. It’s time for the Raiders to make several. They need new leadership throughout.