Raiders Need More Than a Win to Shake Off Embarrassing Loss 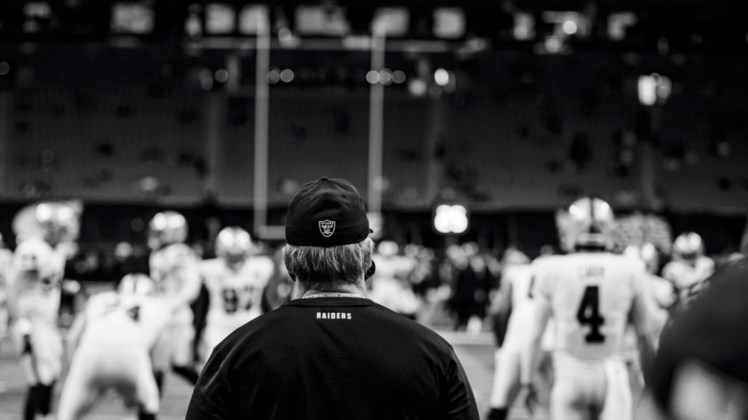 As the Las Vegas Raiders get set to travel to New York to take on the winless Jets, Jon Gruden’s gang needs more than just a win to erase a huge step backward in Week 12.

Usually, the late Al Davis’ mantra, “Just Win Baby” would suffice for the Silver and Black going into a game. Frankly, that’s enough for any team in a professional league with even competition. This week, the Las Vegas Raiders have to push themselves a little further.

The Raiders need a win as they push for a playoff berth. On top of that, this club has to wash off the stench of a 43-6 embarrassment in Atlanta, and a win alone won’t do it.

Let’s toss out a hypothetical scenario.

If the Raiders beat the New York Jets 16-13 but committed 10 or more penalties and turned the ball over four or more times, would that restore a doubter’s confidence in this team as a playoff contender?

Don’t misconstrue the message here. In the NFL, there are no good losses or bad wins. The Raiders don’t need to blow out the Jets by 30-plus points to regain their confidence.

However, they cannot make the same unnecessary mistakes in consecutive weeks and feel good about their chances to go against division opponents who know their tendencies and clubs in the playoff hunt.

While the Raiders shouldn’t focus on a blowout victory, they must strive to play a much cleaner football game—keep the penalties and turnovers at a minimum. In other words, cut down self-inflicted wounds.

If the Raiders want to consider themselves as such, not only do they need a win, they have to show poise, character, and commitment.

Gang Green may give the Raiders its best shot. We may possibly see a close game. While that’s not ideal, the Raiders cannot help their opponent beat them as they had done last week. If that’s the case, a team that stumbles on its own carries more concern than a club that loses in a hard-fought football game.

Playoff contenders had clunkers against lesser opponents this season. The Jacksonville Jaguars have one win, and that’s against the Indianapolis Colts from the season opener. The Tampa Bay Buccaneers lost to the Chicago Bears who are currently on a five-game losing streak. The Tennessee Titans lost 31-20 to the Cincinnati Bengals in Week 8.

In every case, those teams bounced back with clean (winning) performances and didn’t beat themselves. The Colts had one turnover after an embarrassing defeat. The Titans had zero turnovers following their upset loss. The Buccaneers had zero penalties and no turnovers against the Green Bay Packers after a lackluster showing against the Bears.

If this Raiders team is different than the squad from last year, they need to bounce back and do so with a sense of discipline and attention to detail.

If this Raiders team is different than the squad from last year, they need to bounce back and do so with a sense of discipline and attention to detail. Of course, they’ll take the win however it comes, but one sloppy game is a mistake we can all forget, another one sets a trend. That would start a troubling pattern at the most inopportune time—down the stretch when every game counts toward a tight postseason race in the AFC with tiebreakers in play.

After the 43-6 loss to the Falcons, quarterback Derek Carr and fullback Alec Ingold had some concerning assessments about the Raiders’ preparation going into Week 12:

“I didn’t think, personally, we had our best week of practice. Personally, I thought we were a little flat…Our week of practice was not to the standard that we have set,” Carr said at the beginning of the postgame press conference.

“There’s a level of commitment in our locker room we’re still trying to consistently find,” Ingold said (h/t Vincent Bonsignore of the Las Vegas Review-Journal. “We have leaders and we have really good players, but weeks like last week show our youth…I think this next week is really going to show character and poise and team commitment levels.”

During Monday’s presser, head coach Jon Gruden shared a different perspective when asked about the team’s practices leading up to last Sunday’s game (starts at 5:47):

“I felt our guys were preparing as hard as they can. I can’t speak for everybody. I do know our practice, or all of our practices, are impacted by things that go on at the training table, the injury room and all of that stuff. We had some DBs missing, some of our backs were hurt. So, sometimes your practices suffer a little bit but I’m proud of our guys for the way they prepared. I don’t think we lost that game yesterday because we weren’t prepared. We lost that game for some obvious reasons and we have to correct them today.”

During Wednesday’s presser, Carr clarified his statements as he backed off from suggesting the team went into the previous game unprepared (starts at 9:37):

“I should probably say it better. I was a little angry. We always prepare hard, we always prepare tough . . . I think we’ll bring more juice this time, this week in practice. I think us as players want to take more of a stand on that . . . we’ll take it upon ourselves to make things better. I probably could have said it a little better.”

So one of two things happened last week during practice for the Raiders. During practices, Carr and Ingold saw something in their teammates that they felt contributed to the Raiders’ poor performance, which Gruden either denies because he didn’t see it that way or chooses not to speak on publicly.

Regardless, the Raiders shouldn’t have issues with preparation, practice or motivation at this point in the season amid an intense playoff race. The club’s leaders have to deliver a reality check when they notice a lack of focus among their peers—the same goes for the coaching staff.

A young team that experiences lapses in preparation will commit 11 penalties for 141 yards, which would include some head-scratching roughing the passer infractions and violations in the red zone. That team would also likely commit five turnovers.

In a straightforward message to the Raiders: Playoff teams have slipups along the way, but those clubs don’t continuously beat themselves, and they’re usually well-prepared. If the Raiders want to consider themselves as such, not only do they need a win, but as Ingold said, they have to show poise, character and commitment.