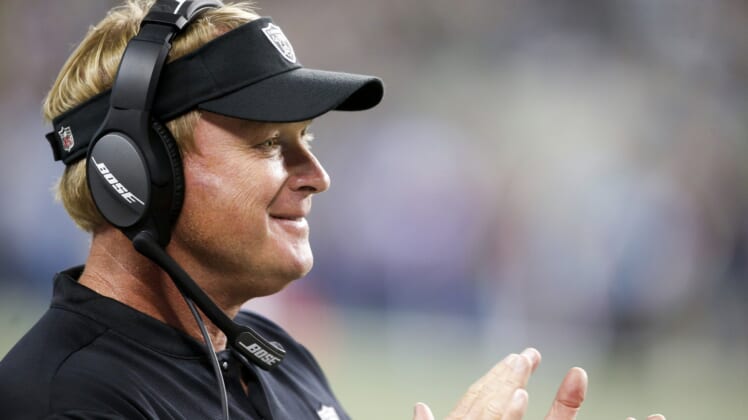 The Oakland Raiders’ decision to fire longtime general manager Reggie McKenzie on Monday has come under fire around the football world.

No matter what head coach Jon Gruden wants us to believe, it was the ultimate power move from Chucky.

This comes with the Raiders at 3-10 on the season and after they traded away Pro Bowlers Amari Cooper and Khalil Mack — both players McKenzie hit on during his stint in Northern California.

As the situation plays out behind the scenes in Oakland, Gruden and Co. have named an interim general manager to replace McKenzie. That comes in the form of college scouting director Shaun Herock.

With GM Reggie McKenzie out today, the #Raiders have tapped college scouting director Shaun Herock — who was Jon Gruden’s most trusted scout among those he inherited — as their de facto interim GM. He’s also expected to get an interview for the vacant top personnel job.

Herock followed McKenzie from the Packers back in 2012 after serving in numerous roles with the organization in Green Bay. This included the assistant director’s role. Whatever in the world that means. Prior to that, he was an intern with the Atlanta Falcons.

Realistically, this is yet another power move from Gruden. There’s no reason to believe that Herock will have control over the player personnel department should he earn the full-time gig.

And in reality, this is going to be an issue with the Raiders under Gruden. No one with any successful experience as a GM is going to want to play second-fiddle to the head coach.