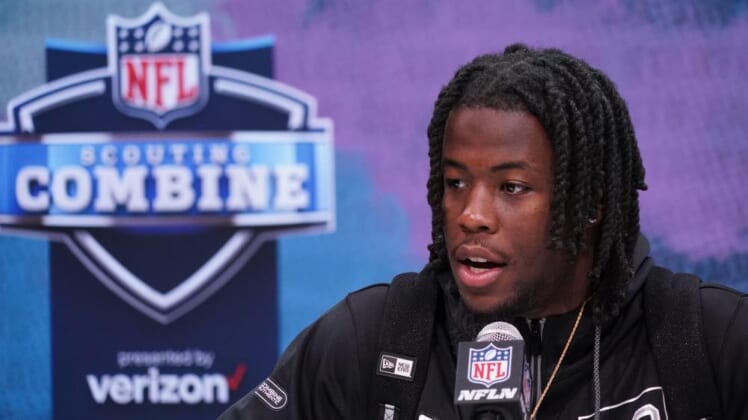 As the NFL Combine continues threatening to “jump the shark,” the Las Vegas Raiders draft needs (ahead of free agency which begins March 18) haven’t changed much as the need for wide receiver and linebacker dominate Moe Moton’s second Raiders mock draft.

After interviewing and watching prospects work out for four days at the NFL Scouting Combine in Indianapolis, team scouts and executives will go back to their big boards for confirmation or adjustments. The Las Vegas Raiders have two first-round selections and three third-rounders, which will allow general manager Mike Mayock to maneuver picks if necessary. Although I usually like to wait until after the start of free agency for a Raiders mock draft, I jumped in a bit early.

The cameras at Lucas Oil Stadium caught Mayock and defensive coordinator Paul Guenther looking at each other after linebacker Isaiah Simmons ran a blazing 4.39 40-yard time:

According to The Athletic‘s Vic Tafur, the Raiders were impressed with Simmons before his on-field workouts.

Will we see a shocking trade? Who knows. For now, outsiders can only speculate as to where prospects rank on the Raiders’ big board. Let’s take a shot at a full seven-round mock draft.

Each selection below is based on a real simulation with the idea of how the Raiders—not yours truly—would approach the draft as of March 2nd.

We all assume the Raiders will take a wide receiver with one of their first two picks. Mayock tried to pump the brakes on that notion with his reasons why recent first-round wideouts fell short of expectations:

Based on Mayock’s comments, he’s looking for a shrewd route-runner who can handle press coverage and read defenses on the move. That sounds like a tough job description, but head coach Jon Gruden expects his wideouts to know all three positions inside and out.

This doesn’t mean CeeDee Lamb can’t check those boxes, but when you watch Jeudy’s game tape, he’s the ideal guy who passes Mayock’s litmus test for early-round wideouts. The Alabama product can line up on the inside or outside, and his routes are crisp.

Jeudy has drawn comparisons to fellow Crimson Tide alum Amari Cooper, which says a lot about his ability to separate out of his breaks.

If the Arizona Cardinals use their eighth pick to pair Lamb with his collegiate teammate Kyler Murray, the Raiders should feel good about Jeudy, who’s the WR1 on some NFL big boards. He’ll start Day 1 and contribute at a high volume as a rookie.

I know it doesn’t make for a surprising Raiders mock draft first pick, but Jeudy’s talent is undeniable and the need is great.

Among the Raiders fanbase, there’s another split opinion between Kenneth Murray and Patrick Queen. They ran solid 40-yard dash times at 4.52 and 4.5 seconds, respectively. Both pulled up with hamstring injuries but should be fine, per NFL Network’s Ian Rapoport:

Whether it’s Rey Maualuga, Vincent Rey or Vontaze Burfict, Guenther’s key linebackers had bigger builds—240 pounds and heavier. The modern game has forced defensive coordinators to use sleek, athletic defenders on the second level, but Murray has the quickness to play sideline to sideline as the defensive centerpiece.

Guenther wouldn’t have to deviate from his prototype at linebacker, and the team can fill a dire need. That’s a win-win scenario.

Murray’s two-year stint as a captain at Oklahoma likely gives him the edge over Queen, who took over a starting position last year.

According to NFL Network’s Peter Schrager, during the combine telecast, Murray said he was “born to lead.” The Raiders would have their alpha for the defense—a prospect with solid experience as a leader on the collegiate level.

For this Raiders mock draft, no question I’d be taking a linebacker at No. 19.