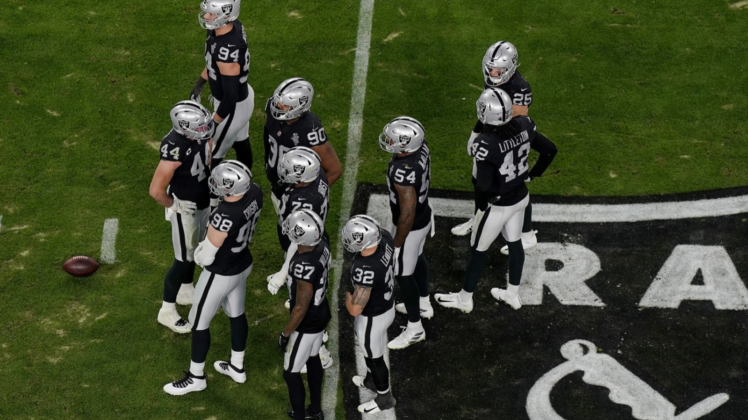 Not only did the Las Vegas Raiders’ playoff hopes take a critical blow on Thursday night, but there are suddenly many more questions than answers when it comes to what this team will be and become when the 2021 season kicks off next year and what Jon Gruden must do to get it into contention.

The state of the Las Vegas Raiders is in flux, once again, with uncertainty and more questions than answers for a franchise on a two-decade search to regain its once proud heritage under coach Jon Gruden.

The Raiders dropped to 7-7 after a 30-27 overtime loss to the Los Angeles Chargers Thursday. The momentum in this matchup swung back and forth through the extra period. Both clubs missed opportunities to score in crucial situations, but the Silver and Black’s blunders came back to bite them.

The Raiders’ night started off rocky. In the first quarter, on third-and-goal, quarterback Derek Carr ran toward the corner of the end zone but pulled up and hobbled off the field. In the postgame press conference, head coach Jon Gruden said Carr has a “significant” groin injury.

Mariota played three full quarters, throwing for 226 yards, one touchdown and an interception. He also ran for 88 yards and a score. The sixth-year signal-caller almost led the Raiders to a victory, but he threw an interception inside the Chargers’ 25-yard line with the game tied late in the fourth quarter. During overtime, the offense stalled and settled for a field goal at Los Angeles’ 5-yard line.

The Raiders defense had a meltdown on the game’s final drive. Cornerback Trayvon Mullen drew a pass interference penalty, which allowed the Chargers to advance the ball 20 yards downfield. Quarterback Justin Herbert connected with Jalen Guyton on a 53-yard pass, beating Keisean Nixon in coverage. Four plays later, Herbert reached across the goal line for the game-winning score.

Without a solid defense, the Raiders will continue to fall apart against decent offensive attacks.

Believe it or not, in that short summary, we touched on four issues that will stick with the Raiders as they finish the regular season and go into the offseason. Although Vegas has two games left on the schedule, let’s briefly touch on a few bullet points.

How Do the Raiders Fix Their Defense?

The Raiders spent money on the defense this past offseason, but their investments haven’t amounted to much production. Let’s took a look at five notable additions:

Nicholas Morrow, who’s on an expiring deal, has outplayed Littleton at linebacker. Nassib missed two games as a healthy scratch, which isn’t a good sign for a player averaging more than $8 million annually in salary. Kwiatoski has been solid, though not spectacular while on the field through the Raiders’ recent issues in run defense.

With 67 tackles, seven for loss, two sacks, nine pass breakups, an interception and a forced fumble, Morrow seems like a candidate for an extension, so where does that leave Littleton?

Heath leads the Raiders in interceptions (three). He’ll likely stick around. Collins logged just 12 tackles in 10 games, don’t expect him back in Vegas. The team may have to work with Nassib whose contract holds $5.75 million in dead money next season.

Mike Mayock must acquire a solid cover defender on the back end to replace Erik Harris and complement Johnathan Abram. He’ll also need a game-changing 3-technique defensive tackle with Collins and Johnathan Hankins coming off the books.

Regardless of whom the Raiders hire for the defensive coordinator position, he’ll need better personnel, specifically at safety and for the interior pass rush.

Without a solid defense, the Raiders will continue to fall apart against decent offensive attacks. On Thursday, Chargers’ top wideouts Keenan Allen (hamstring) and Mike Williams (back) battled injuries and combined for just three catches and 39 yards. Yet Herbert threw for 314 yards and two touchdowns.

How Can Jon Gruden Solve His Red-Zone Issues?

Gruden has struggled with decisions inside the 20-yard line. For him, the opponent’s red zone resembles a big stop light in terms of touchdown scores. Let’s take a look at the Raiders’ touchdown conversion rate in the red zone under his play-calling:

Under Gruden, the Raiders have consistently ranked in the bottom half leaguewide, which is a problem if you consider the fact that the offense has made strides in other areas such as yards accumulated and points scored.

Against the Chargers, the Raiders made four trips to the red zone and finished with two touchdowns and two field goals. During one trip, Carr suffered a groin injury, but the two goal-line plays before that generated a net three yards. In overtime, inside the Chargers’ 5-yard line, the Raiders settled for a field goal instead of scoring a touchdown, which would’ve ended the game.

Gruden has to take a hard look in the mirror, swallow his pride and perhaps consider delegating red-zone calls or hiring an offensive assistant who can help him near the goal line.

What’s Next for Marcus Mariota?

Under short notice, Mariota kept the Raiders in the game. He accumulated 314 total yards and two scores through the air and on the ground. The 27-year-old will likely go under center in the final two games if Carr sits out with a groin injury.

Let’s not suggest a quarterback controversy in Vegas after one contest. The Raiders could showcase Mariota and trade him for a draft pick. If he flashes in an audition setting, another team may offer something for him.

With the uncertainty of the 2021 salary cap, the Raiders may dump some contracts. Mariota is due $10.1 million next season. Just 24 hours ago, critics considered him a waste of money since he hadn’t taken an offensive snap. Over the next two weeks, Vegas can flip him into an asset or come to the realization that he’s a valuable backup who can continue to grow behind Carr.

What Can the Raiders Do to Avoid Another Late-Season Slide?

The Raiders must dig deep to find answers here. In consecutive seasons, Las Vegas has crumbled after Week 11.

In 2019, the club started to slide after a 34-3 loss to the New York Jets. This year, the Atlanta Falcons crushed Vegas 43-6 at the Mercedes-Benz Stadium. Last season, the Raiders failed to recover from a blowout road loss. While they can still finish 9-7, the chances seem slim with their injuries and the momentum against them.

Gruden has a 25-40 record in December and January regular-season games. He’s coached two teams that missed the playoffs after a 6-3 start and could fall into a dubious category after the 2020 campaign, per Josh Dubow of the Associated Press:

The Raiders have youth in key positions because of their rebuild and added several new players on the defense, though Gruden’s late-season struggles raise major concerns.

To be fair, we have to put Gruden’s coaching career in perspective and respect his 2002 Super Bowl run with the Tampa Bay Buccaneers, but that was a veteran-laden squad with leaders such as Derrick Brooks, Ronde Barber, John Lynch and Simeon Rice in the locker room. Wide receivers Keyshawn Johnson and Keenan McCardell weren’t vocal leaders, but they were 30 and 32 years old, respectively, during that title run.

Jon Gruden cannot babysit players, but he should look to add productive hard-nosed, battle-tested and productive starting veterans to the Raiders’ locker room. They can show his young team how to push through a barrier that’s kept them out of the playoffs over the last two years.