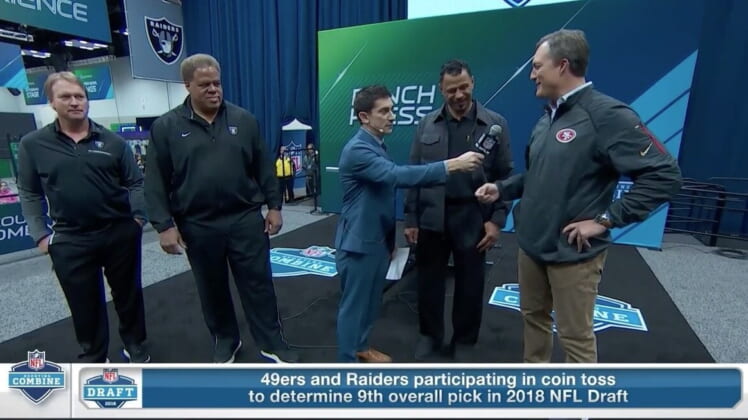 In an unusual live broadcast coin toss on the NFL Network live from the NFL Combine in Indianapolis, the Raiders lost their coin toss for the 9th overall pick in April’s NFL Draft.

The Oakland Raiders have started the second Jon Gruden era with a loss  – coin toss loss.

Thankfully, it’s only a coin flip for draft order in next month’s NFL Draft.

Raiders great – and Hall of Famer – Rod Woodson didn’t bring much luck as the Raiders lost the coin toss to San Francisco.

Former Raiders cornerback and Hall of Famer Rod Woodson actually flipped the coin that had one side adorned with the 49ers logo, and the other with the Raiders iconic shield logo. After flipping the coin in the air, the football gods were not with Oakland on this day as the landed with the Raiders Bay Area neighbors logo glimmering upward toward the lights of the cameras assuring San Francisco of the 9th overall pick in the amateur football draft.

The Raiders have 11 overall picks in the draft: