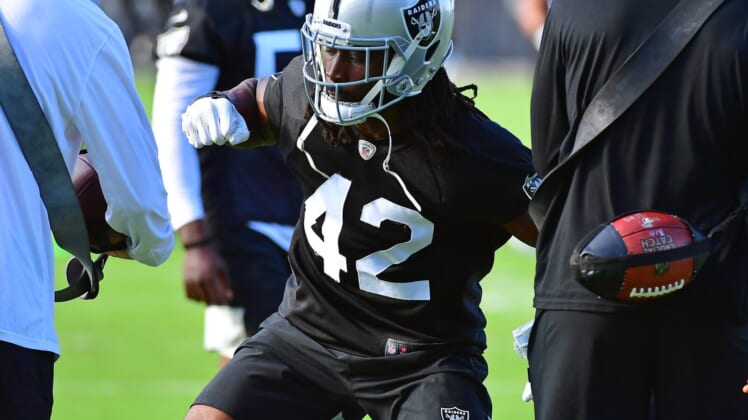 Prior to the 2020 season, Las Vegas Raiders linebacker Corey Littleton played for the Los Angeles Rams for four seasons and appeared in all 64 regular-season games, in addition to all four playoff games, including Super Bowl LIII.

The last time he missed a start was Week 14 in 2017 when the Rams defeated the Seattle Seahawks 42-7.

Before last season, Littleton signed a three-year with the Raiders, a $35.2 million contract that would lock him up until 2023.

However, what we saw from the 6-foot-3 linebacker in a Rams uniform did not quite transition into a Raiders uniform.

Last season, he started every game, expect for weeks 10 and 11 when he was one of many to land on the team’s COVID-19 list. In addition, Week 11 was also the game when the Raiders came up just short to the sweep the season series against the Kansas City Chiefs in a 35-31 loss.

The sixth-year linebacker recorded 82 tackles last year and was unable to hit the quarterback. Littleton went from averaging 8.4 tackles per game in 2019 to 5.9 tackles last season.

Whether it was opposing offensive coordinators figuring him out or trying to adapt to a new city with new teammates, Littleton will have to improve in 2021, especially being part of a defense that only recorded 10 interceptions and 21 sacks a season ago. The 10 interceptions were tied for fifth lowest, with the New York Jets, Dallas Cowboys and AFC West foe Denver Broncos only having fewer.

In addition, the 21 sacks ranked fourth lowest in 2020 with only the Cincinnati Bengals, Jacksonville Jaguars and Tennessee Titans recording fewer.

To increase those numbers, the Raiders brought in a couple of new faces, including defensive coordinator Gus Bradley and linebackers coach Richard Smith, who have a combined 50 years of NFL coaching experience.

Raiders linebacker group has a lot of depth

Besides Littleton at the Raiders linebacker position, the Raiders have Nick Morrow, who started 11 games last year and also missed time as a result of landing on the COVID-19 list.

Morrow, who played Division III football at Greenville University in Illinois, was signed as an undrafted free agent by the organization in 2017.  Last season, the 26-year-old recorded 78 total tackles with 62 of those coming by himself.

Raiders head coach Jon Gruden said 2021 is Morrow’s time to produce, but also to emerge as a leader as the season progresses.

“He might be one of my favorite players,” Gruden said Tuesday after the first day of training camp. “This is his time. He’s got a chance, I think, to be a captain for us. I think he’s got a chance to be a difference maker for us in the middle of our defense. But time will tell. We got a long way to go, but I really like him. He’s had a great spring and I think he’s on the rise.”

The Raiders linebacker group will have more veteran depth with Nick Kwiatkoski and Darron Lee, both who enter the season with at least five years of NFL experience.

Kwiatkoski, who begins his sixth NFL season and second in a Raiders uniform this year, started 12 times, but missed two weeks both at the beginning and the conclusion of last season.

While he was on the field, Kwiatkoski recorded 81 tackles along with an interception and a forced fumble, including a 13-tackle showing in a 31-26 victory over the Los Angeles Chargers in Week 8 a season ago.

Lee, a former first-round pick in 2016 by the Jets, has also appeared with the Buffalo Bills and Chiefs, including being part of the 2020 Super Bowl Championship team with Kansas City two seasons ago.

Despite limited playing time over the last couple of years and moving between the active and practice rosters last year for the Bills, Lee’s best season came in 2017 when he recorded 94 tackles and two forced fumbles.

The Raiders linebacker room also has younger players in the mix, such as Tanner Muse and back-to-back 2021 third-round picks Malcolm Koonce and Divine Deablo, who both recently signed last week.

Muse was a third-round pick in 2020 but did not appear in a game for the Silver and Black last year.

However, Gruden still believes in the former safety from Clemson with his quickness, despite returning from injury.

“Muse can run, he can really run,” Gruden said. “No offseason program, I’m not making excuses. It was tough on him and then he got hurt. So, he’s another draft choice that is completely an unsolved mystery. But he’s healthy, he’s ready to go.”

The second-time Raider head coach said he was amazed with Koonce and Deablo, despite the latter suffering a setback with a tweaked knee.

“Really impressed with (Malcolm) Koonce,” Gruden said. “Malcolm Koonce has made an impression.”

“(Deablo) had a knee procedure done,” Gruden said. “Here’s another young guy that can really run. He has a bright eye, really alert understanding for football and has a big upside for us.”

Gruden expects Deablo to return in a few weeks.

With Bradley and Smith entering as new coaches, along with a new defensive strategy, Morrow said by the time the 17-game slate begins, his teammates will have the belief to grasp the game plan during training camp and preseason games.

“There’s always a lot of optimism and that’s a good thing,” Morrow said Wednesday after practice. “That can carry you over and give you some momentum going into the season. I think guys are locked in and prepared with the scheme being a little more simplistic. It allows players to play faster. It allows the younger guys to understand it and pick it up faster, so I think people are excited about the opportunity to play faster and free.”

“He might be one of my favorite players. This is his time. If you know anything about Morrow, you have to tell me where he went to college, where exactly that is. He comes from a very obscure background. If you watched him playing college football, he was returning kickoffs, playing all over the place. He comes to the Raiders and he makes it as a rookie, he finds a way to get on the field. And now he’s got a chance, I think, to be a captain for us, I think he’s got a chance to be a difference maker for us in the middle of our defense. But, time will tell. We got a long way to go, but I really like him. He’s had a great spring and I think he’s on the rise. I think his time is right now.”

Gruden on Muse and Deablo:

“Muse can run. He can really run. He played safety at Clemson. No offseason program, I’m not making excuses, it was tough on him and then he got hurt. So, he’s another draft choice that is completely an unsolved mystery. But, he’s healthy, he’s ready to go. [Linebackers coach] Richard Smith has been coaching linebackers for the last 30 years in this league. He likes him, he’s going to be a special teams contributor, I know that. Divine Deablo tweaked his knee. He had a knee procedure done. We expect to have him back in the next couple of weeks. Here’s another young guy that can really run, he has a bright eye, really alert understanding for football and has a big upside for us.”