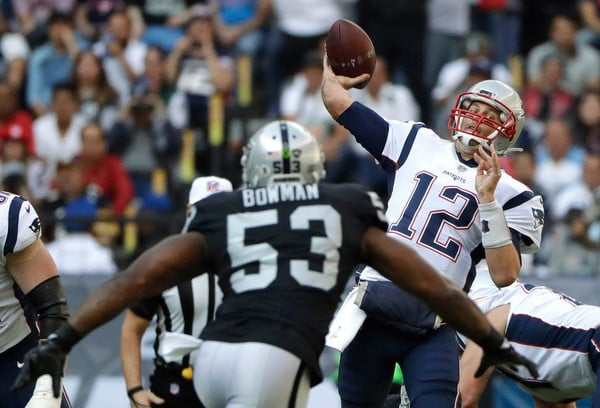 The hope this year’s Oakland Raiders would finally put it all together crumbled in a disappointing and unequivocal shellacking by New England in Mexico yesterday.

Raider Nation is in yet another state of mourning after another lackluster loss by a team many predicted to reach the Super Bowl in 2017, losing badly to the streaking New England Patriots 33-8 on Sunday.

The loss all but ended any chance the Raiders have of winning the AFC West or even making the playoffs. And while many will write about what happened, what the team should have done Sunday, it’s pretty simple in my book: this team just doesn’t execute well.

Add insult to injury: the Kansas City Chiefs lost again opening the door for the Raiders to control their own destiny in the AFC West race.

Almost immediately on Sunday, we saw so much of why this talented but underachieving team has fallen down this year: a lack of focus. A rash of dropped passes, overthrown passes, busted coverage, and other mental miscues doomed the Raiders almost immediately. The Patriots raced to a quick 14-0 lead and the Raiders offense – the overwhelming strength of this team – could never put any consistent rhythm together.

The game also continued the Patriots decades long domination of the series. The loss was the fifth-straight to New England  with the all-time series stands at 17-14-1 in favor of the Patriots. The Raiders have not beaten Tom Brady and the Patriots since Nov. 17, 2002, when they won at home in Oakland-Alameda County Coliseum, 27-20.

While much of the blame will be put by some on the coaching staff, watching the Raiders through 11 weeks and its clear the players have to shoulder much of the blame. Even when the offense is executed well, the ugly case of the drops continues to haunt this team. Dropping easy passes or passes that have to be caught has been a problem all year and doesn’t seem to be getting better.

When asked if the Raiders had lost all hope for this season and a possible playoff berth, Head Coach Jack Del Rio dismissed that notion.

“To me, I don’t give any credence to those kind of questions,” Del Rio said. “I mean, no offense, but I — to me it’s a, we’re professionals and to me, so long as you have hope, you keep your hope, you keep hope alive. So, we’ll continue to scratch and claw and fight for everything we can.”

You wouldn’t expect anything different from a warrior like Del Rio. Yet things haven’t gone the team’s was since Week 3 and not even a bye week helped the team enough to even be competitive against Brady and the Pats.

How bad was it? Consider this:

You could spend a lot of time breaking down what went wrong but it’s really not worth the exercise. The Raiders have just been unable to put together a full 60 minutes of football at their full potential. It’s going to take a while to address all of the issues this team has and why they cannot focus enough to play as well as they did against Tennessee and New York to start the season.

This is one of those times when the organization has a lot of soul searching to do. While many will say this team was overrated and feasted on a weaker schedule this year, I still believe they’re closer to being competitive than not. Still, something isn’t right and the coaching staff and front office need to start attacking the issues now in preparation for 2018.

“I’ve got to throw the ball better,” Carr said. “The drops — it’s got to be something to do with me, I got to throw it better, I got to put it on them, better timing, it’s on me. It’s on me to get that fixed and I’m going to work to do that.”

Carr may be stepping up to take responsibility – admirable as the team’s leader – but balls directly in the hands of receivers that are dropped clearly say more about the receiving corps than his throws. It’s been bad all year and it hasn’t improved one iota.

“Obviously, we know that our culture and everything that we do works, because we have seen it work,” Carr added. “So there’s little things that coach is going to hit on and we’ll let him do that.”

The culture may have worked in 2016, but the question has to be what’s different and why isn’t it working in 2017?

Unfortunately, the answer to that question isn’t any more clear in Week 12 as it was in Week 3.