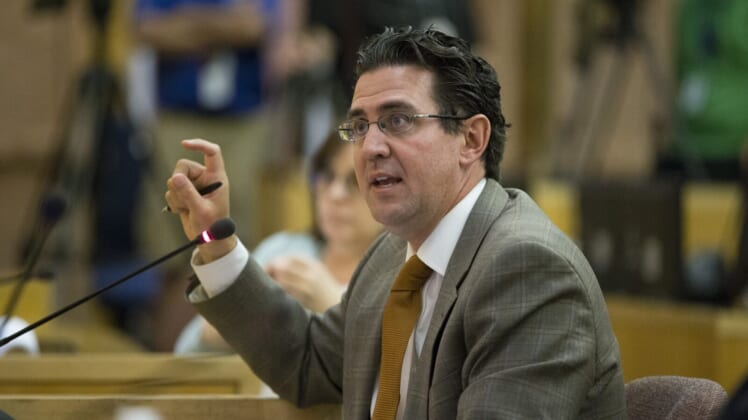 The Clark County Commission approved Tuesday the issuance of bonds to cover the pledged $750 million in public money to build the Oakland Raiders stadium in Las Vegas.

In a 6-1 vote, funding of the stadium is now fully covered, with the Raiders responsible for the additional $1.1 billion required to build the project. The bonds will be issued and begin funding of the stadium project sometime in May. To this point, the Las Vegas Stadium Authority (LVSA) has already added $25 million in funds until the bonds have been issued.

One more step. Just signed the bond ordinance that we passed yesterday authorizing the sale of @VegasStadium Authority Bonds. pic.twitter.com/Mqkv8oFpFh

Jeremy Aguero, the LVSA’s lead on the project, suggested that the annual tax revenue created by the stadium would come in higher than the previously projected $35 million. Aguero said the tax revenue derived from taxes on payroll and other taxes were not originally included in the projection. The reason: the LVSA did not have enough data to accurately project the extra tax revenue, so, as a fiscally conservative measure, they omitted it from the original report. Aguero feels the $40-$45 million would be a more accurate projection on tax revenue. Commissioner Steve Sisolak requested the LVSA and Aguero officially update the projections.

Aguero was confident tax revenue for the stadium will be higher than initially anticipated.

The stadium project is fully underway with hundreds of laborers already working on the site. The concrete footings for the massive structure are already being set and cement being poured for foundational concrete. The site’s activity continues to increase as the funding has been finalized and funds flowing.

Just last week, NFL Owners approved the Raiders stadium plan, as did the LVSA, clearing all but one hurdle on the project. Yet to be determined is the team’s plans for parking. Clark County regulations would require 16,250 spaces for the 65,000-seat facility. That requirement can be waived by the County Commission, and sources continue to tell the Silver and Black Today the team is close to several deals to secure more than enough parking to address concerns.

The stadium is expected to be ready for the 2020 season for both the Raiders and UNLV football program.