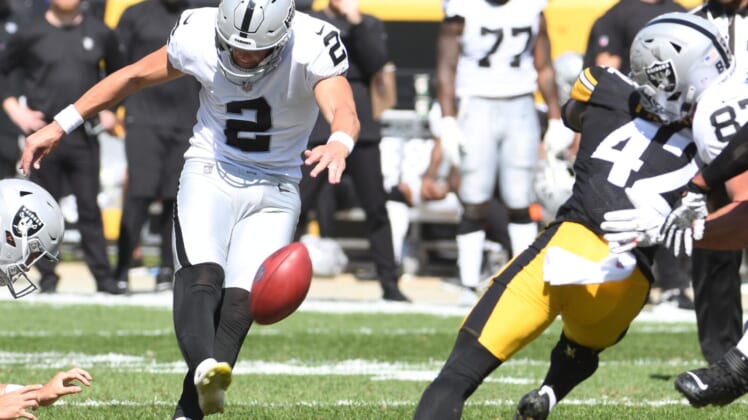 “Obviously, it’s a team thing, the whole unit, 14 points in the game, it’s a huge deal for that win,” Carlson said. “For me, every kick, whether I have one kick or five, six whatever it may be, everyone has the same exact value. It’s points for the team and we’re glad we’re able to capitalize on a few opportunities this past game. Getting an award is a cherry on top.”

Three of his four field goals came in the first half, with the furthest being from 46 yards out to open the scoring in the first quarter.

Carlson’s final field goal came with 20 seconds remaining in the game to seal the victory and help the team come back to Las Vegas undefeated heading into Week 3.

During the Week 1 overtime win against the Baltimore Ravens, Carlson’s foot was on display as he kicked a career-long 55-yard field goal through the uprights to tie the game and force overtime.

Carlson said he does not worry too much about the adrenaline with how much work he puts in before kicking in a game.

“The main thing is preparations,” Carlson said. “(With) preparations, you don’t have to worry about ‘this is a big moment.’ I’ve been in this moment one hundred million times it feels like now with practice kicks, game kick and now I’ve got some experience where I start to get comfortable. Whether it is the first game of the season or the last game of the season, all the kicks are trying to be the exact same.”

Wednesday marked the third time in Carlson’s career in which he received Special Teams Player of the Week and first since the Week 1 during last year’s NFL season when Carlson hit two field goals, including one from 54 yards in a 34-30 win over the Carolina Panthers.

When it comes to kicking, Carlson said his position is more about the psychological aspect compared to other physical positions on the field, such as a lineman.

“We’re almost kind of like golfers out on a football field,” Carlson said. “It’s more of a mental sport for us than it is a physical and for me that is where experience has paid off. That’s why you see kickers that are a lot older in the league. Mentally, I’ve grown a lot over the last few years in the NFL and that’s definitely paid off.”

QB injuries on both sides for Sunday

The Miami Dolphins come to Allegiant Stadium for a 1:05 Sunday afternoon kickoff against the Raiders. However, both teams are dealing with injuries entering Week 3, especially at the quarterback position.

Dolphins head coach Brian Flores announced earlier Wednesday that they will be without quarterback Tua Tagovailoa, who fractured his ribs last week and is out on Sunday. That means Jacoby Brissett will fill in as the play caller this week.

Brissett, who had been with the Indianapolis Colts from 2017 to 2020, signed a one-year deal with the Dolphins to be their back up quarterback.

After Tagovailoa exited Sunday’s game Brissett completed 24-of-40 passes for 169 yards and threw an interception. In addition, he rushed twice for four yards in a 35-0 Dolphins loss over the Buffalo Bills.

For the Raiders, Derek Carr is questionable after a low hit forced him to be down, seconds after a touchdown pass to tight end Foster Moreau. That led to an MRI on his ankle on Monday.

However, Carr, who leads the NFL in passing yards through the first two weeks, was a full participant in Wednesday’s practice leading to him projected to play on Sunday.

The 6-foot-3 quarterback said it is a mentality to return and be able to play each week.

“Any injury you have, the first thing your coach ever ask, ‘you going to ready on Sunday,’” Carr said. “Your first response is where you set your mind. ‘Uh, coach, I’m going to try my best. Or I don’t, we’ll see.’ Or it’s, ‘yes I’m playing.’ There’s two different ways of setting your mind to know no matter what it is, the first response is, ‘Yes, absolutely I’m playing.’ Now every decision I make in rehab, on the field and all that, is to make sure I play on Sunday.”

However, left guard Richie Incognito, running back Josh Jacobs and safeties Dallin Leavitt and Roderic Teamer did not practice.

With all of the change occurring on the offensive line, the Raiders picked up a reinforcement. On Wednesday, the team signed tackle Jackson Barton for the New York Giants practice squad. As a result, linebacker Marquel Lee was released.

Barton has also spent time with the Kansas City Chiefs and was a seventh-round pick by the Colts in 2019.

Prior to his professional career, Barton played five seasons at the University of Utah playing in 53 games, including 29 starts from 2014 to 2018.