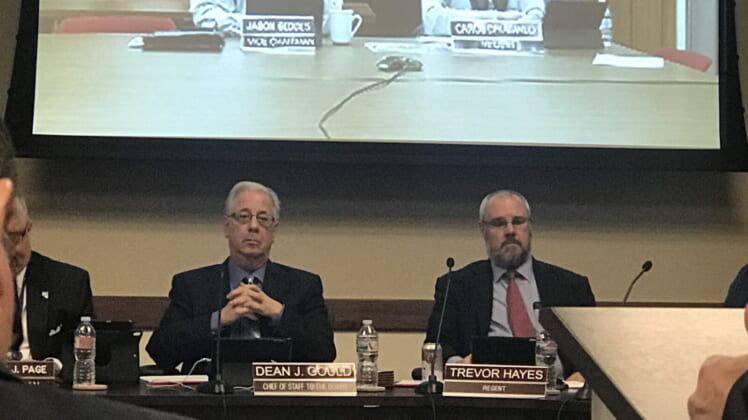 UNLV’s brass feels good about its deal with the Raiders on joint use of the new $1.9 Billion stadium in Las Vegas.

While a few of the Nevada System of Higher Education Board of Regents had some issues and tough questions for their own system attorneys, the overall mood and feeling after today’s meeting reviewing the agreement between UNLV and the Oakland Raiders was one of mutual appreciation.

The joint use agreement grants UNLV the use under the provisions set forth in Senate Bill 1 – the legislation that made the $1.9 Billion Raiders stadium possible. The agreement grants UNLV use of the stadium, recognition of revenue from the sale of advertising, luxury suites, parking, and concessions. Most Regents, and members of the Las Vegas Stadium Authority Board on hand, and officials from both the Raiders and UNLV, were overwhelmingly satisfied with the agreement.

It was mostly smooth sailing. The meeting had its share of memorable quotes including the two best according to us.

“This agreement is good for both the UNLV football program and the Raiders moving ahead as we prepare to build one of the world’s great venues.” – Steve Hill, Chairman – Las Vegas Stadium Authority

When asked about the provision in the agreement related to the lack of exclusive language stating UNLV could walk away from the lease at anytime, Regent John T. Moran dubbed it a “nothing burger” saying if the language could be added, fine but it was no way near a dealbreaker.

Regent Cedric Crear (far left) had some issues with the language in the joint use agreement.

Regent Trevor Hayes, who provided the entire room a short and sweet lesson on college athletics scheduling, also closed the meeting thanking the Board for their hard work, and the Raiders for their willingness to work side-by-side UNLV to bang out a deal.

“The autumn wind is a Rebel,” Hayes joked. Not everyone in the room got the reference but laughs were audible.

A few items that raised the ire of a few regents were around UNLV’s ability to walk away from the agreement at anytime with no penalties.

Regent Cedric Crear was most concerned with the Raiders ability to “bump” games if a scheduling need arises. Although it would be due to extraordinary circumstances, Crear’s concerns were based on the financial impact it could have on UNLV if a big game we moved or cancelled, the university might have to pay fees to a visiting team and be out perhaps up to $1 Million.

Both UNLV Director of Athletics Desiree Reed-Francois, and the system’s attorney, assured Regent Crear the odds were low and scheduling doesn’t concern them at all.

Remember folks, NV Board of Regents not voting today on @UNLV–@RAIDERS stadium joint-use deal — @SteveSisolak joked with a board member before meeting "to take it easy on us" and by length of meeting not sure that happened. @lvraidersreport @872Laborers pic.twitter.com/AfT62wQxxO

Regent Hayes wants a clause that addresses the eventuality of UNLV entering a new conference where they may need to schedule more than two non-conference games. Also doesn't want the restriction that games must end by 11:59 pm.