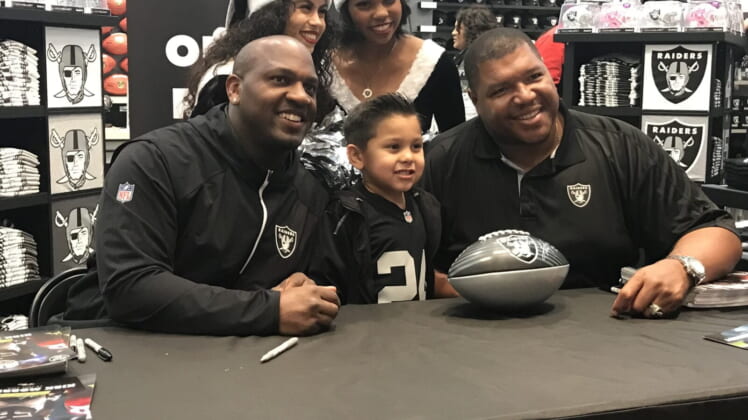 The team might be three years away from calling Las Vegas its permanent home, but it’s already an entrenched and highly active organization in the Southern Nevada community. To help out kids in the community, the Raiders joined the US Marines for a Toys-for-Tots toy drive at its Las Vegas Raider Image retail store.

During the Christmas season, the wide-eyed vision of young kids opening a toy on the big day is synonymous with the joy of the season. Yet, too often in our community disadvantaged children never know that joy. That’s where the U.S. Marine’s Toys-For-Tots campaign comes in.

This is what being in the community is all about. The Raiders have always been committed to giving back to the community in Oakland and Los Angeles and it will be no different here in Las Vegas. – Raiders Alumni Lincoln Kennedy

Joining with their partners the Marines, the Oakland Raiders held a toy drive at its Raider Image retail store, located at the Town Square shopping center in Las Vegas. Local residents who brought a new, unwrapped toy were able to meet Raiders alumni Kirk Morrison and Lincoln Kennedy. The two NFL standouts signed autographed and posed for pictures with the generous members of Raider Nation who stopped by.

“This is what being in the community is all about,” said Kennedy said. “The Raiders have always been committed to giving back to the community in Oakland and Los Angeles and it will be no different here in Las Vegas.”

All toy donations from this event will be given to the Toys for Tots of Southern Nevada. By providing those in need a shiny new toy during the holiday season, Toys for Tots strives to deliver a message of hope to needy youngsters intended to motivate them to grow up to be responsible, productive, patriotic citizens and community leaders.

“Especially this time of the year, people need a little help,” Morrison said. “For all these loyal members of Raider Nation to come out, give a toy, and spend some time here with us says it all. Las Vegas is a giving community and the Raiders are a giving organization. It’s important to show the team will be involved here even if they won’t be here for a few years.”

The Raiders, and their philanthropic foundation, have been active in the Las Vegas community since day one after their relocation was approved. From helping provide new shoes for disadvantaged kids, to helping stock a local boxing gym run by the Laborer’s Local 872, the Raiders commitment to Southern Nevada has been steadfast in advance of their official move to the city in 2020.