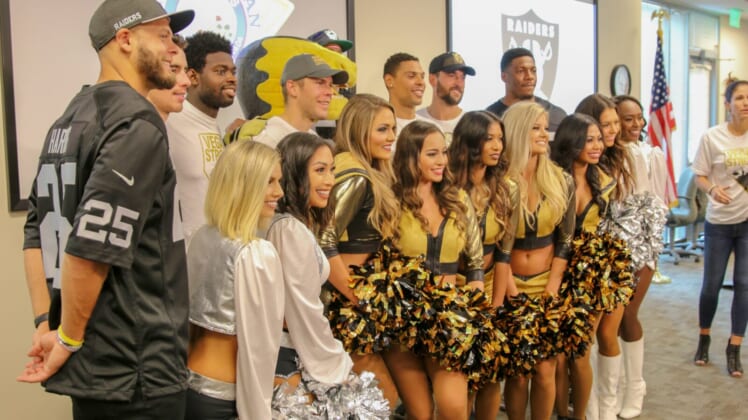 The future Las Vegas Raiders were in town today along with their friends from the Western Conference Champion Vegas Golden Knights to meet and greet first responders in the wake of the first anniversary of the Oct. 1, 2017 shooting in Las Vegas.

While they may be heroes to some on the football field, Raiders players Marquel Lee, Erik Harris and Kyle Wilber shined the light on true heroes – the first responders of Clark County on Tuesday. The event, held at the Las Vegas Metropolitan Police Department headquarters in Las Vegas, gave the two franchises the opportunity to meet the men and women who worked on that fateful day along with other police and firefighters who protect our city each and every day.

“These are the real heroes out here,” said Raiders linebacker Marquel Lee. “To be here and shake their hand and say thank you for all they do was really special for us and I’m glad we could help bring a smile to their face.”

Raiders Kyle Wilber and Marquel Lee snap a photo with a first responder at today’s event.

After the teams provided lunch to the first responders, players toured the Fusion Center, which provides tactical and strategic support to regional stakeholders on terrorism and crime.

“It really is remarkable what these men and women are doing each and every day,” said Raiders safety Erik Harris. “It feels good to be here with them today and to give our time to show them the appreciation they deserve.”

The Raiders players say they are invested in the Las Vegas community despite the fact the team still has another season after 2018 before they call the Silver State home. To each of them, the contribution of first responders in the city they will soon call home makes them feel closer to the community already.

“We’re excited about coming to Las Vegas and after meeting all these folks it feels real,” Lee said. “These will be our fans and people who protect all of us and it was just an amazing thing to spend time with them and give them the appreciation they deserve.”

The Raiders quickly responded after the shooting in 2017 and honored the victims and the first responders at the groundbreaking for the new $1.8 billion stadium last year, and before their home game this year against Cleveland.

Tune in to the Silver and Black Today on CBS Sports Radio 1140-AM (streaming on Radio.com) Saturday from 8-10am to hear the full Raiders interviews.