Long (and short) history of Jets vs. Raiders 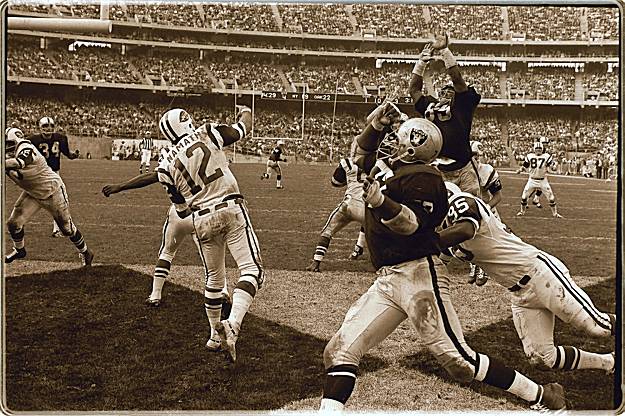 The storied history of the old American Football League still lives in AFC matchups like the Jets and Raiders. But is there really a rivalry between this two teams?

When you think of Raiders rivals, you might think of teams like fellow AFC West foes Kansas City, Denver or  the Los Angeles Chargers.

Really, any AFC team is a rival if you’re a hardcore Raider Nation fan. Still, there are teams the Raiders have had long histories with – going back to the American Football League days – and the New York Jets are certainly one of those.

As the Raiders prep for their 2017 home opener – one of the last in their original home of Oakland – we take a look at the matchup with the Jets over the 50+ years the two teams have tangled on the gridiron.

The Jets (first known as the New York Titans) first tangled in the early years of the AFL and both didn’t pan out so good. But in 1963, the Raiders hired a new young head coach by the name of Al Davis and the rest is history. For the early part of the rivalry, nothing remarkable really happened with the Raiders dominating the early series.

Then, in November 1968, professional football history occurred in the worst way possible. During the Raiders vs. Jets matchup, the Jets flew to a 32-29 lead late in the game as the clock approach 7pm on the East Coast. NBC, who was broadcasting the game, was set to play the family movie, Heidi at the top of the hour despite the game being close and late in the fourth quarter.

Following protocol, NBC switched to the movie before the end of the game – right before the Raiders scored two touchdowns in a nine second span, eventually prevailing 43-32. The only problem: no one saw the ending. What will forever be known as “The Heidi Bowl,” is, without a doubt, the most memorable and infamous tangle between the two clubs.

In the 90s, the rivalry was lopsided toward the Raiders who won all but one of the games in the five the two teams played. That included a pure barnburner in 1999 when the Raiders came from behind late to edge New York.

In the New Millenium

As the century turned, the rivalry received a new spark when the two teams butted heads on Monday Night Football during a 31-7 drubbing by the Raiders. That led to another to-and-fro between the old AFL members in 2001.

The second year of the decade brought about another AFC West crown for the Raiders, although they dropped their final regular season game to the Jets at home, thereby assuring New York of an AFC Wild Card spot. The very next week, the Jets returned to Oakland where the Raiders dispatched the guys in green, 38-24.

The same scenario would play out the very next season after the Raiders rode on to their third-straight AFC West title once again playing the Jets during the regular season on MNF. Oakland won a close affair 26-20, and the Jets had a long, winding road to make it to the playoffs. We’ll spare you the scenarios but long story short – the Jets won the AFC East title. They then found themselves back on a plane to Oakland a few weeks later where the Raiders grounded the Jets 30-10 en route to the AFC Championship Game.

The teams flip-flopped wins throughout the decade as the Raiders are .500 (2-2) over the past four games against New York. The last meeting, in 2015, was a banner day for quarterback Derek Carr. Carr finished the 34-20 victory over the Jets throwing for 333 yards and four touchdowns at home in Oakland. That included strikes of 59, 49, and 36 yards in the lopsided win.

There’s always a bit of magic when two of the old AFL teams tangle. Despite a long history, only a few of the games in the series have had playoff or championship implications. By far, The Heidi Bowl, played the year before this writer was born, is the one that sticks out the most.