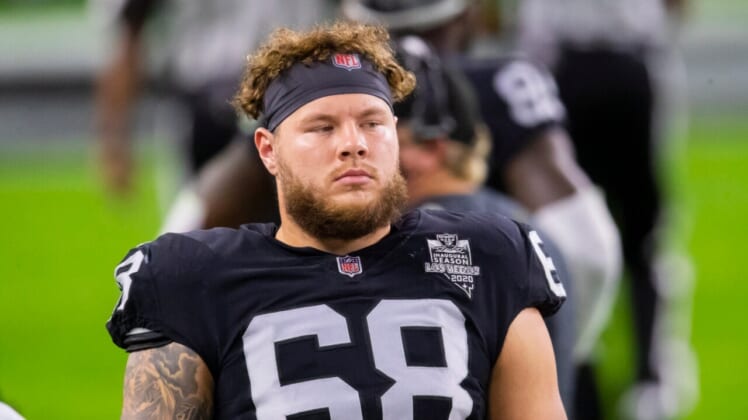 The Las Vegas Raiders announced this morning a multi-year extension with center Andre James who is expected to replace the recently traded Rodney Hudson. Terms of the deal were not released.

HENDERSON – The Las Vegas Raiders announced on Monday they had signed offensive lineman and center Andre James to a multi-year extension. James, who is expected to replace Pro Bowl center Rodney Hudson who was traded to the Arizona Cardinals last week, was an undrafted free agent signing by the club in 2019.

With the Raiders revamp of their offensive line, reports indicate they believe Andre James can compete to be their starter at center and has progressed nicely after they signed him out of UCLA two seasons ago. The Raiders, last week, signed veteran Houston Texans center Nick Martin who is also expected to compete for the starting role.

The Raiders have traded or released three of their starting five offensive linemen from the 2020 season including Hudson, Gabe Jackson, and Trent Brown. The team has decided to go younger (and cheaper) and free up resources to help fix their porous defense. The signing of an extension for Andre James shows the Raiders’ commitment to some of the players they have in-house.

By signing Andre James to a new deal, he was slated to be a free agent next season, the Raiders not only have a possible starting center, but also a player who can play multiple positions on the line if need be.

Terms on the length or cost of the deal were not disclosed.