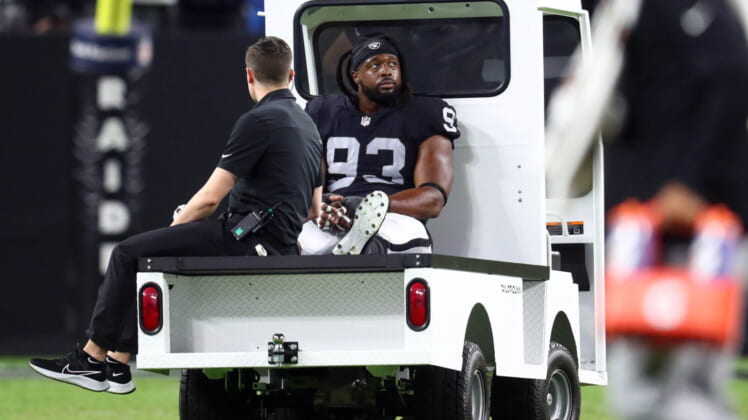 On Monday night, the Las Vegas Raiders won an overtime thriller, 33-27, in front of the first sold-out crowd at Allegiant Stadium. The day after the come-from-behind win, Raiders injuries now threaten to dampen the positive emotion generated by the win.

Pro Football Talk reports tonight multiple injuries that will affect the team for the rest of the season.

Josh Alper and Myles Simmons from Pro Football talk via Jeremy Fowler of ESPN are reporting that right guard Denzelle Good suffered a torn ACL, which would sideline him for the remainder of the season.

The 6-foot-5 guard went down early in the first quarter with what was clearly a knee injury.

Good was one of the team’s four new starters at the offensive line entering last night’s game and Jermaine Eluemunor, who signed a one-year contract a couple of weeks ago, stepped up in place of Good and performed well overall.

“I thought Jermaine Eluemunor came off the bench and did an unbelievable job given the fact he just got here,” head coach Jon Gruden told the media Tuesday.

Another offensive player that exited the game due to injury was backup quarterback Marcus Mariota. Mariota appeared for only one play — a 31-yard rushing gain on 3rd-and-1 during the team’s first drive.

“We lost a big part of our offense,” Gruden said of Mariota. “Hopefully, it’s not going to linger on. He missed the whole preseason with a quad strain. He strained it again last night. The severity of that injury kept him out of the game. That’s too bad because it was a 31-yard gain to really give us an ailment that we really haven’t had around here.”

Defensively, the Raiders injuries also hit at the heart of depth on that side of the ball. Defensive end Yannick Ngakoue injured his hamstring leaving during the fourth quarter Monday. In addition, 11-year defensive lineman Gerald McCoy was carted off the field with an apparent knee injury and is expected to most likely miss the season. It’s a tough break for McCoy, who missed all of last season as well due to suffering a ruptured quadriceps injury as a member of the Dallas Cowboys.

“Hopefully, Yannick is not seriously injured as he possibly can be,” Gruden said. “We don’t know the outcome yet. Losing McCoy is a big loss to our leadership network and our D-line.”

McCoy signed a one-year contract last month and was a former first-round pick by the Tampa Bay Buccaneers.

Defensive end mate Carl Nassib, who recorded a forced fumble to set up the game-winning touchdown in overtime on Monday, said Ngakoue and Maxx Crosby – along with the defensive line – help him be the best player he can be on the field.

“Those guys make me better every day,” Nassib said of Ngakoue and Crosby following Monday’s victory. “We have a great D-line. This is the best team I’ve ever been a part of and it’s really exciting stuff. Those two are great pass rushers and I’m learning from them too, even though I’m older than them. They’re just playing as hard as they possibly can and I am really excited for them.”

Nassib said his teammates would continue to improve despite the injuries, knowing that they are facing tough teams to begin the year.

The rash of Raiders injuries in Week 1 makes a daunting task for a cross-country trip to Pittsburgh to take on the Steelers during a short week.