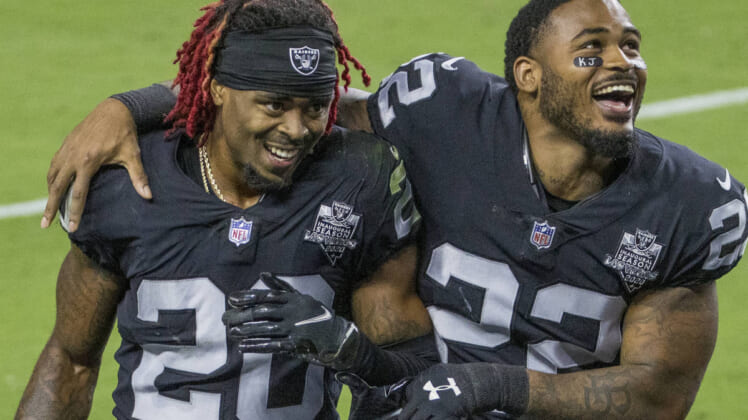 It’s only Week 4 of the 2020 NFL season but as Las Vegas Raiders injuries mount, a season of promise hangs in the balance as the team’s depth and muster challenged.

As the Las Vegas Raiders injuries continue to mount, a promising new season of hope and excitement in their new home hangs by a thread as the 2-1 team prepares for a big game at home this Sunday against the 3-0 Buffalo Bills.

Despite a promising 2-0 start, the Raiders are now hoping and praying much of their top-tier talent sidelined by injuries can get healthy before the season gets away from them.

The Raiders are now the fifth-most injured team in the NFL. In a season of so much uncertainty with the COVID-19 pandemic, injuries and illness were always top of mind. But the Raiders rolled the dice and have come up snake eyes thus far.

The good news: a few of the injured Raiders seem to be close to a return. Rookie wide receiver Henry Ruggs III is reportedly on the mend as is linebacker Nick Kwiatkoski who the Silver and Black lost in Week 1 vs. Carolina. Ruggs’ return is big but Kwiatkoski the more important player for the Raiders as their defense languishes near the bottom of almost every defensive category in the NFL.

Head Coach Jon Gruden was asked specifically about the return of Brown and Kwiatkoski this week, Gruden had a glimmer of optimism.

“I’m hoping so. I am hoping so,” Gruden said. “But as you know, some of these injuries are hard to be exact in terms of the timetable, so we’ll keep our fingers crossed. Both men are improving, and we need them back in the lineup. We are missing a number of key ingredients to the stew right now, and those are two big guys that we need back.”

Both the inability of Brown to stay healthy, and the early injury of the team’s defensive leader in Kwiatkoski has severely hurt the Raiders. Luckily, they played through it with heart and determination to win their first two games.

The Raiders, I feel, are on the brink. It’s not a lack of talent, coaching or the right game plan that has them here. It’s the lack of availability of their better players that is hurting them now. That’s not an excuse, but rather a fact of NFL life. Injuries happen to all teams but the Raiders are young and still building. They’re an unfinished but better product and losing as many starters as they have makes them uneven for now.

The defense is, again, at the bottom of the league in almost every category. On the defensive line and at linebacker, they’ve underperformed. Yet their young cornerbacks, and safety Johnathan Abram, have done well overall. Abram had a bad game at New England but the loss of Arnette is disheartening. With the continuing improving and impressive Trayvon Mullen on the other side, the young cornerbacks were coming along nicely. Now, that position must adopt the “next man up” mentality.

It’s too early in the season to know how it will all pan out for Las Vegas. As the Raiders injuries worsen, could they be about to turn the corner with Brown, Kwiatkoski, and Ruggs? Let’s hope so.

If the Raiders can’t get some of their better players healthy – and fast – this brutal first five games of the season could severely hurt their playoff chances. A return of Brown, Kwiatkoski, and Ruggs could be a spark as they again play at home this Sunday.

They say in the NFL that by Week 5 you can tell what a team will be in a given season. The Raiders are a young, talented, and ascending team. But without their starters, and if injuries continue to tax the roster, we may never know what team they could have been.

Injuries aren’t planned for and you can’t prevent them. All you can do is ride them out and hope those left to play can keep you close enough to win games and keep you in the running.

The Raiders injuries are a problem now and, before it’s too late, perhaps a little Las Vegas luck will help them get back to full strength so we can see truly who they are.