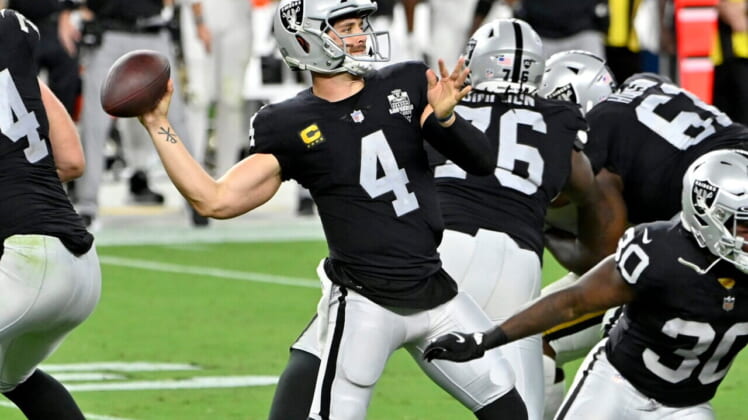 While the Las Vegas Raiders find themselves at this point in the season 6-4 for the second-straight season, the elite play of quarterback Derek Carr, and better depth at the position, means the team is better prepared for a playoff run in 2020.

Going into Week 12, the Las Vegas Raiders find themselves in a familiar spot at 6-4. Ironically, like last season, they have back-to-back road games to start their final six-game stretch. Why is this year different? Two key reasons: Derek Carr and depth.

In 2019, the New York Jets and Kansas City Chiefs handed the Raiders consecutive losses for a combined score of 74-12. The squad looked flat, beaten down from all the traveling through the season, and undermanned at several positions.

This season has a different feel to it. During Wednesday’s media presser, quarterback Derek Carr shared bits and pieces of his conversation with general manager Mike Mayock about the team (starts at 3:22):

“Me and Mr. Mayock, I said the same words to him in our conversation the other day… ‘you know we were 6-4 last year?’ And I said, ‘Yeah, but this feels different.’ And he said, ‘I agree.’ I think we both feel that it’s different…We’re definitely a better team this year, but we right now have to, and I mean have to, finish this season better than we did last year. And I believe that we will,” Derek Carr said.

Derek Carr has the confidence in his squad to finish strong, but the Raiders still have to execute and prove him right. Although he didn’t get into any specifics as to why this club won’t fall out of the playoff picture as they did last year, two aspects of the roster stand out.

Looking back to the offseason, when Derek Carr organized workouts with his teammates, he fully embraced his leadership role. Back in August, Mayock spoke about the quarterback’s growth beyond the X’s and O’s.

From there, Carr called out his critics and said he’s “tired of being disrespected.” The 29-year-old had something to prove to the naysayers, doubters and haters out there. And then, he translated that determination into results.

In Week 5, Derek Carr won his first game at Arrowhead Stadium in a stunning 40-32 victory over the Kansas City Chiefs. On November 1st, he endured the inclement Cleveland weather and helped lead the Silver and Black to a hard-fought 16-6 win.

We can check off two boxes for Carr. He beat the Chiefs on their field and made some crucial plays in cold weather to defeat the Browns, rushing for 41 yards and throwing the game’s only touchdown pass to wideout Hunter Renfrow.

Now, let’s take a look at the big picture for Derek Carr’s 2020 campaign. He has career highs in multiple key quarterback metrics and ranks within the top 10 for each category:

Last year, Carr’s production tapered off after he engineered a game-winning drive against the Detroit Lions in Week 9. In the remaining eight games, he threw for just eight touchdowns and four interceptions.

Based on Derek Carr’s Week 11 performance against the Kansas City Chiefs, throwing for 275 yards, three touchdowns and an interception with a 74 percent completion rate, he’s not showing signs of a letdown. Throughout the year, the three-time Pro Bowler has been relatively consistent, logging quarterback ratings above 107 in seven out of 10 outings.

As we witnessed in the Browns game, Carr is more comfortable using his legs. He’s rushed for 10 first downs, the most in his career since 2014, and 124 yards, the second-most since his 2015 term.

Carr’s mobility is the difference in his play between 2020 and the 2016 season fans still talk about. Four years ago, he ran for just 70 yards and five first downs. Now, with a stronger command of the offense, defenders have to account for his improvisational skills. Carr has played with notable fearlessness:

Oftentimes, you’ll see Carr move the pocket, direct his receivers with hand signals and deliver accurate strikes downfield. That shows supreme confidence in his abilities and fluidity we haven’t seen in previous seasons. When he extends plays, defenders cannot relax in coverage and expect him to go down easily.

Raiders Built to Handle Injuries Down the Stretch

Every team deals with injuries. With that said, the Raiders lost key starters and depth at various positions last year. Let’s take a look at the list of players who missed significant time or went down toward the end of the 2019 campaign:

Tyrell Williams and Trent Brown have experienced injury woes this season as well. The former went on season-ending injured reserve with a torn labrum before Week 1. The latter battled a calf injury and the effects of COVID-19.

Last year, the Raiders didn’t have the depth to compensate for the loss of Williams and Brown. This season, Nelson Agholor has filled a void in the passing game. He leads the Raiders in touchdown receptions (six) and ranks second in receiving yards (443) as one of the most pleasant surprises of the season. Rookie wideouts Henry Ruggs III and Bryan Edwards still have time to develop and make a bigger impact.

Brandon Parker struggled through his first two seasons, giving up 54 pressures and 13 sacks in 26 contests, per Pro Football Focus (subscription required). He’s turned the corner as of late, playing well in the swing tackle role in place of Kolton Miller on the left and Brown/Sam Young on the right side.

Going down the injury list, the Raiders didn’t have either of their starting safeties after Week 10 last year. Abram is still a developing talent with just 10 starts, but he has flashes of solid play closer to the line of scrimmage and on open-field tackles. Jeff Heath leads the team in interceptions (three) as a key rotational player at safety.

Last year, Vontaze Burfict’s indefinite suspension dealt a significant blow to the linebacker unit, leaving a coverage-flawed Tahir Whitehead as the top second-level defender. This season, Nick Kwiatkoski and Nicholas Morrow have paired together as a solid duo on the back end of the front seven. The latter has a case to retain his snaps once Cory Littleton returns to action from the COVID-19 list.

When called upon, Isaiah Johnson, who spent half of his rookie campaign on injured reserve, helped seal a victory over the Los Angeles Chargers in Week 9.

He gained the confidence to fill in if needed to replace Trayvon Mullen or rookie Damon Arnette on the outside.

Running back Josh Jacobs pushed through half of the 2019 season with a fractured shoulder and missed three of the final four games. Despite a minor hip injury, he’s relatively healthy with a complementary tailback alongside him in Devontae Booker.

Most playoff teams have two things in common. Those squads possess the depth to withstand injuries and oftentimes have a quarterback who’s playing at a top-10 level relative to his peers. Unlike last year, this roster has both. By January, we may finally say, these aren’t the same old Raiders.