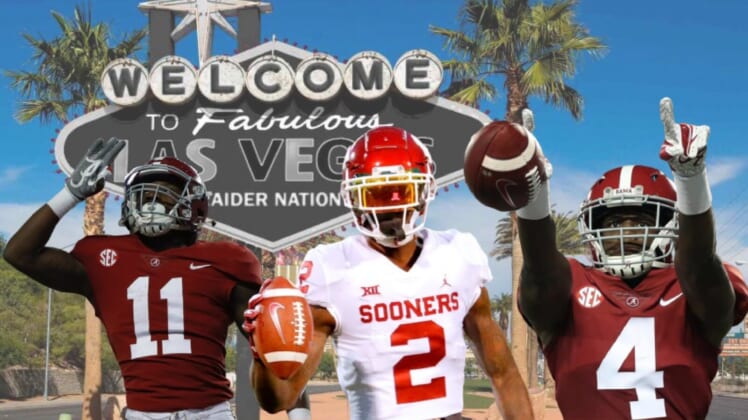 The NFL Draft is just over a week away and the Las Vegas Raiders reaffirmed their need at the wide receiver position. But what fit, strategy and players will general manager Mike Mayock and coach Jon Gruden target?

Of course, Mayock didn’t tip his hand and spill any draft secrets from his binder. He confirmed some broad points and portrayed an open mind at wide receiver with some ambiguous quotes in a game of pre-draft poker.

During his exchange with reporters, Mayock had a couple of responses about the wide receiver position that stood out.

“I think the cool thing though about Jon’s offense, and I think what he showed last year especially with what he did with our tight ends, Jon’s adaptable to whoever he has,” Mayock said.

In other words, the Raiders will tailor the system to their talent, but the team will weigh a player’s “fit” within the scheme.

What Type of Wide Receiver is a Good Fit?

As we all know, Gruden uses his version of the west coast offense. At the NFL Scouting Combine, Mayock made a point that the team’s incoming receivers have to know all three positions (X, Z and the slot) when the play flips and through audibles without looking to the sideline for cues from the coaching staff:

Here’s a fun tidbit from Steve Smith Sr. who initially had his struggles with verbiage in the west coast offense:

When we talk about wide receivers in this class, don’t fall in love with physical tools—pay attention to a prospect’s ability to run routes, capacity to play each position and the complexity of his collegiate offensive system.

Remember, Martavis Bryant is a physically-gifted athlete. On the other hand, according to James Jones of NFL Network, the 28-year-old didn’t grasp Gruden’s playbook (h/t Michael David Smith).

“I just had a chance to speak with Coach Olson and he said talent-wise, there’s probably nobody that can compete with [Bryant] talent-wise,” Jones said. “But they said he’s not picking up the playbook, and that’s the reason of a little frustration right now because they want to get him on the field but he’s not able to grasp the playbook yet.”

Through the Raiders’ perspective, beyond reliable hands, route-running and the ability to make adjustments to coverage on fly are valuable traits.

In February, Mayock also talked about the ability to beat press coverage:

Some wide receivers rarely face top-level press coverage (if at all) on the collegiate level. As a result, many of them experience a rough start in the pros when bigger cornerbacks come up for a good jam at the line of scrimmage.

Football fans usually talk about speed, but play strength is also important in a physical game. Defensive backs can’t engage in too much physicality downfield, so they try to disrupt timing at the beginning of routes.

Now, let’s take a look at possible targets for Day 1 and 2.

Breaking Down the Big 3 Wide Receivers

CeeDee Lamb, Jerry Jeudy and Henry Ruggs III have shown varying levels of their ability to set themselves up for a catch. However, most draft gurus would say that’s Jeudy’s best trait:

It’s unlikely the Raiders would pass on Jeudy at 12, though, we can’t ignore his drops in the middle of the field. The Alabama wideout can shift and separate like very few coming out of college, but he must complete the difficult plays in front of the safety and behind linebackers.

Ruggs is fairly and unfairly attached to one trait: speed. He’s more than just a blazer on the field. The 5’11”, 188-pounder isn’t on the same level of Jeudy in route-running, but he knows how to create separation with his ability to read coverages. He can also dissect a defense from different spots (inside or outside) before the snap.

Nonetheless, Ruggs’ frame raises a concern. How will he fare against bigger bodies? Will his lean mass lead to durability issues? Secondly, the Alabama wideout must produce at a much higher volume after recording just 3.3 receptions per game over the last two seasons.

Lamb doesn’t have top-level speed. He created separation with subtle quickness and field awareness. The 6’2″, 198-pound wideout can exploit holes on every level and showed improvisation skills with mobile quarterbacks Kyler Murray and Jalen Hurts under center over the last two terms.

On the flip side, the Big 12 doesn’t prepare wide receivers for constant press-man looks in the NFL. The Raiders would have to trust that Lamb’s traits translate to the pro level. He has the play strength and football IQ to beat physical cornerbacks, but the Oklahoma product feasted on far less-competitive collegiate defenses.

The Raiders could select any of the three consensus top wideouts. If they’re on the lookout for a lead guy, Jeudy seems most ready to step into that role because of his advanced route-running, collegiate production in a featured role and play speed.

Lamb projects as the best overall prospect, though, he drops a slight notch because of Mayock’s comment about press-man coverage. Ruggs possesses tremendous upside because of his physical tools and technical skill. He also has the biggest question marks (size, play strength and volume).

“There could be a wide receiver No. 1 in the third round,” he said.

Keep in mind, Tyrell Williams doesn’t have more than 69 catches in a single season.

The Raiders need pass-catching volume at wide receiver—someone they can rely on in any given situation. There’s a reason the team rolled the dice on an elite on-field talent like Antonio Brown despite his volatility. The four-time All-Pro recorded at least 101 receptions in six consecutive seasons with the Pittsburgh Steelers.

Whether the Raiders select a wideout in the first round or not, they should double-dip with this class. Agholor may provide depth. Zay Jones could take another step in the offense. Yet, both will be free agents next year, leaving Williams and Hunter Renfrow as the only players at the position on the books beyond 2020.

If Michael Pittman or Brandon Aiyuk drops into the 80s, Mayock will find high potential in the third round. Why would either fall? Pittman doesn’t have elite speed and wears the “possession receiver” label. Aiyuk underwent core-muscle surgery, per NFL Network’s Mike Garafolo.

Between the two, Pittman is a better route-runner with the tendency to win battles for contested catches. Aiyuk becomes an elusive ball-carrier after the catch. Despite his 4.5-second 40-yard time, the Arizona State product uses quickness to rack up extra yardage. He’ll need some development in route combinations but provides position versatility with experience (mostly) on the perimeter and in the slot.

With one week until the start of the draft, two strategies have come to the forefront. Group one says the Raiders should take a wideout early while the counter-argument highlights the depth in this class and the possibility that first-round talent may fall to the back end of Day 2.

If Mayock and Gruden have a chance to pick the second- or third-best wide receiver on their big board, they should take that prospect on Day 1.

Sure, this draft has great depth at wideout, but why pass up on top prospects at a strong position of need to look elsewhere unless Jeff Okudah, Derrick Brown or Isaiah Simmons falls to No. 12?

Some fans scream BPA (best player available). That strategy isn’t so cut, dry and simple. In most cases, roster need plays a factor, though, teams shouldn’t reach to fill holes.

Here’s a case in point. The 2020 class has a quality group of offensive tackles. The Raiders are set at the position with Kolton Miller and Trent Brown. If Jedrick Wills, Tristan Wirfs, Mekhi Becton or Andrew Thomas are available, do you think team brass would take one of those prospects over a cornerback or wide receiver ranked lower on the big board? Probably not. Don’t kid yourselves—needs absolutely matter.

Mayock and Gruden will keep their options open. Still, they’re unlikely to pass on wide receivers (one of their top two needs) for the entire first round. It’s rare for teams to go on the clock with the 12th pick and have a shot at an elite-level prospect who addresses a major void on the depth chart.

With so much time to break down prospects and countless mock drafts, we overthink the best possible choice. If Jeudy, Lamb or Ruggs are available at 12, the decision is crystal clear. Don’t try to outsmart the virtual draft room and talk yourself out of a dynamic playmaker.