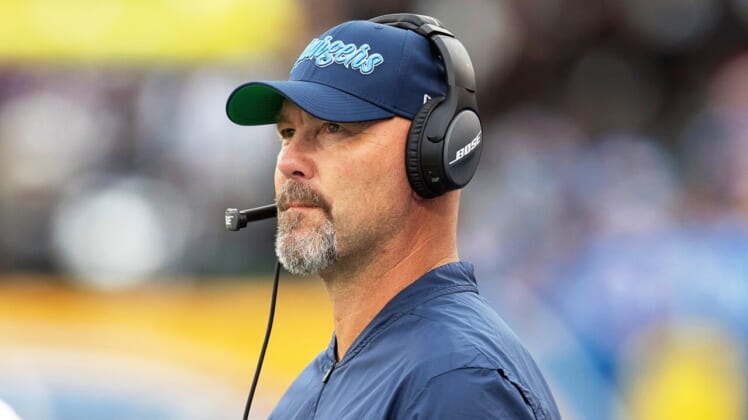 The Raiders’ search for a new defensive coordinator has come to an end with the hire of Gus Bradley.

Jon Gruden said the Las Vegas Raiders would move fast with their defensive coordinator search and that’s exactly what they have done as they announced the hire of Gus Bradley today to fill the position after Paul Guenther was fired in December.

Bradley was most recently working as the defensive coordinator for the division-rival Los Angeles Chargers and previously worked with Jon Gruden in Tampa Bay. The two are now reunited in the Nevada desert where they will look to turn around a defensive unit that cost the team many games last season.

Bradley has been the presumed frontrunner for the position for a little while now and besides a tough stint as head coach of the Jacksonville Jaguars, has generally found success in his previous professional stints.

In 2019, Bradley’s Chargers defense finished in the Top 10 in defense (sixth) and fifth against the past. In 2020, Bradley’s LA defense allowed 200.3 passing yards per game – the second-fewest by a Chargers team since 2010.

Gus Bradley has typically played a cover-three heavy defense in his previous stops, using a more passive style of defense that relies upon a bend-don’t-break philosophy. It was in Seattle that this system really thrived under Bradley’s guidance and their success would spawn many copycats across the NFL.

Still, at his introductory press conference, Bradley emphasized the fact that his defensive philosophy has evolved over the years and that making sure they maximize individual player’s abilities is more important than sticking to a strict scheme.

“It really involves looking at the personnel that we have and then putting guys in positions where they can make a lot of plays,” Bradley said early Tuesday morning and he mentioned that the process would involve a month of “sitting down and watching the film before we talk candidly about each player.”

If Bradley did wish to continue with his scheme, a safety that could thrive playing zone coverage would be near the top of the list of priorities, someone who could play the role that Earl Thomas did in Seattle. However, it’s the defensive line that may need even more work and personnel changes than the defensive backs.

Bradley’s Chargers ranked last in the NFL in Blitz percentage last season (16.3%) and thus relied on their four-man front to create most of the pressure on the quarterback. With pass rushers such as Joey Bosa and Melvin Ingram on the roster that strategy might’ve had some success in Los Angeles, but considering that only Maxx Crosby had more than three sacks for the Raiders last season that might have to change.

“Really where it all starts is up front and that’s first and foremost,” said Bradley when asked about the next steps with this defense “to get things right up front and then fill it in everywhere else”. The team has acquired players such as Clelin Ferrel, Maliek Collins, and Carl Nassib in recent years but none have had the impact the team hoped. It’s up to Bradley now to get results out of underachieving players.

It was known from the start that defensive line coach Rod Marinelli would be remaining with the team no matter who the new hire was, but in addition to him, Bradley has brought some new position coaches to Las Vegas.

Richard Smith and Ron Milus were both a part of the Chargers staff this past season and they will bring their AFC West experience to the Raiders. Gruden has emphasized in the past that he wants a coordinator that can empower their position coaches and the fact that Bradley is bringing along two of his guys is a good sign that the communication will be strong.

Overall, this defense needs plenty of work and Bradley will have no slow days on the job. From free agency to the draft, management better consider all alternatives for upgrading the talent as asking Bradley to create a dominant defense with the current personnel is setting him up to fail.

It’s clear that Bradley is excited with the way that the franchise is trending and believes in the front office that is in place. When asked what sold him on the job, Bradley mentioned it was Gruden, Mayock, and Davis’ vision that put the nail in the coffin.