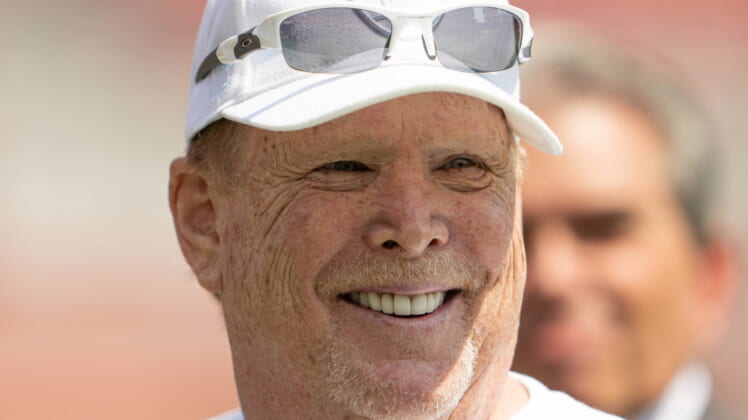 Despite everything that’s happened within the Las Vegas Raiders organization over the past few months, owner Mark Davis won’t have any issues with his Raiders head coaching job search. More than a few candidates have already inquired about the job as the Raiders ended their three-game losing streak and a possible run at the playoffs.

According to a source close to Jason La Canfora of CBS Sports, Davis isn’t ready to seriously consider the potential successor for Jon Gruden, and he’s already shot down those with interest in the position.

“It’s been a month since Jon Gruden resigned as head coach of the Raiders, but league sources said the team has not begun a coaching search and has rebuffed inquiries from many interested parties as owner Mark Davis focuses on trying to reach the playoffs this season,” La Canfora wrote.

Keep in mind, the Raiders cannot conduct a search that includes coaches employed by other teams around the league until the season dwindles down to the final two weeks (h/t NFL.com’s Nick Shook). The Raiders head coaching job won’t get filled until the regular season (and perhaps the playoffs) are done.

“Another notable change revealed in Tuesday’s memo is that, beginning in the upcoming hiring cycle, teams are allowed to interview a candidate for a head coach position during the final two weeks of the regular season with the consent of the employer club. The interview can be virtual, and once the employing team gives consent, the candidate will be able to interview for any open head coach role.

A position is considered “open” if the head coach that started the season is no longer employed by the club, or has received notice he will no longer be with the club in the following season. As it was prior to these changes, candidates not currently employed by a team are free to interview as they please.

Davis will have plenty of time to narrow down his shortlist of potential Raiders head coaching job candidates. In the meantime, he must make a decision on general manager Mike Mayock.

Usually, general managers choose their head coaches, so it wouldn’t make much sense for Davis to aggressively pursue anyone until he’s sure about what’s next for Mayock. The Raiders head coaching job must include direction and input – if not the final decision – from the team’s general manager.

If Davis keeps Mayock, the latter will have major input on the next hire. In the event that the Raiders choose to boot him, the next general manager would have a say-so in the head-coach hiring process.

On top of that, the team has to make a final call on interim head coach Rich Bisaccia, who has the Raiders in a playoff race. Regardless of what anyone thinks of him in a full-time role, he’ll likely interview for the position, especially if the team clinches a postseason berth.

Either way, critics shouldn’t read too much into Davis’ disinterest in digging deep into candidates unless he has his sights set on someone who’s available such as Doug Pederson. He still needs to fill in some blanks amid a playoff run and cannot talk to hot-name candidates such as Kellen Moore, Byron Leftwich, or Brian Daboll at this time. By the way, all three of those coordinators lead top-five scoring offenses. They should be considered Raiders head coaching job possibilities out of the gate.

At the end of the month, when the Raiders can conduct a full search, they should have quality candidates in line to take over the job if Bisaccia isn’t the guy for the role.

According to Over the Cap, the Raiders will have approximately $50.1 million in cap space—the eighth-most leaguewide. That’s a big plus for any Raiders head coaching job prospect.

Vegas will hold $9.2 million in dead money with a majority of it coming from contracts tied to 2020 first-rounders Henry Ruggs III and Damon Arnette, who had been waived over the past few weeks.

According to ESPN’s Adam Schefter, Derek Carr plans to approach the team about a new contract, but the new regime can trade him for another quarterback and clear an additional $19.9 million cap space. The shot-callers can also keep the starting signal-caller as the centerpiece and leader of the team.

If Carr remains, the Raiders will still have the resources to extend key playmakers and retool multiple areas on the roster, which leads us to the following point of emphasis.

Don’t assume a new general or head coach leads this franchise into another full-blown rebuild. Carr has played some of his best football this season. Like Gruden, the new lead skipper may see a future with the 30-year-old signal-caller, the pieces around him and standout players on the other side of the ball.

The Raiders have a strong defensive front with Yannick Ngakoue, Maxx Crosby and Solomon Thomas, who has an expiring contract. Cornerback Casey Hayward Jr. has played well enough to extend his stay in Vegas as well.

Next year, the front office can re-sign Thomas along with Hayward and extend Crosby as veteran cornerstones of the defense. Meanwhile, safety Tre’von Moehrig and slot cornerback Nate Hobbs would continue to grow in starting roles through their second term. Ngakoue and cornerback Trayvon Mullen have deals that run through the 2022 campaign.

Next offseason, the Raiders must focus on wide receivers, guards and linebackers because of expiring deals, lackluster performances and aging at those positions. Any Raiders head coaching job candidate will look at the current roster and know the retooling will be at a minimum and winning is possible quickly.

As the Raiders head into their third campaign at Allegiant Stadium, a new head coach can write his own chapter for one of the most iconic franchises that still draws casual fans.

Since the 2002 term, the Silver and Black has made one trip to the postseason, but people still care to watch the club in the prime-time slot. Per Schefter, the Raiders vs. Cowboys Thanksgiving matchup drew the most viewers on any network since 1990.

Remember, the Cowboys play on Thanksgiving every year, but this game against the Raiders hit a high point in viewership.

Any potential Raiders head coaching job candidate up for the challenge of steering a storied franchise back on the right track with that many eyeballs on the product would want this opportunity.