Raiders Having Fun and That Matters 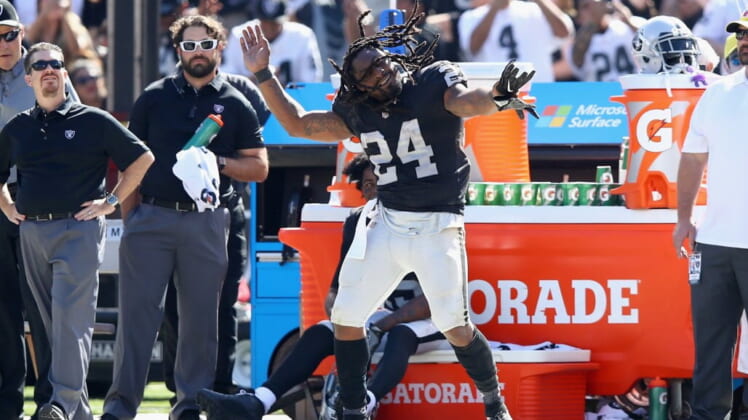 OAKLAND, CA – SEPTEMBER 17: Marshawn Lynch #24 of the Oakland Raiders dances on the sideline during their win over the New York Jets at Oakland-Alameda County Coliseum on September 17, 2017 in Oakland, California. (Photo by Ezra Shaw/Getty Images)

We all know the Raiders have enough talent to take them to the Super Bowl. What’s just as impressive is this team works hard but also has perhaps the most fun of any team in the NFL.

As the 45-20 shellacking of the New York Jets reached its humanitarian end in Week 2, first-year running back Marshawn Lynch, playing as a Raider for the first time in his hometown, couldn’t help but get down. Raider Nation loved his dance and it shook the entire stadium as fans celebrated with him. The infectious joy reflected in the oft misunderstood veteran highlights yet another reason this team has a chance to be very special.

They have fun playing football.

Marshawn Lynch is the greatest pic.twitter.com/iCLodp7qus

Sure, these guys make millions of dollars playing in the NFL but it is a game. You should be having fun. More importantly, talented teams who are coached well, and play loose, tend to get injured less, perform to their level, and build the ever-important team chemistry you find in great, championship teams.

“It was just joy,” McKenzie said. “So much fun. And it was all natural. It just happened. Football needs more fun like that.”

Breaking down game film, you can see areas where the Raiders are absolutely killing it. You can also find areas where they need to improve. Every team has weaknesses they hope to shore up during the course of the 17-week season. This Raiders team is off to a nice start in X’s and O’s, but also in the bigger team game. While I have to cover the team from a distance, every press conference and interaction I am able to see, these guys truly love being around one another.

A week earlier, Lynch again provided a moment of levity as Derek Carr was being interviewed by Deion Sanders via his iPhone from the locker room. Yes, Lynch is at the center of this Raiders joy movement. That sort of camaraderie is important – especially when this team faces obstacles or setbacks.

The swagger this team did anger the Jets on Sunday. A franchise at completely the opposite side of the spectrum, they took umbrage with Lynch’s joyful display and shared their displeasure.

“”It irks my ever-living nerves,” Jets linebacker Jordan Jenkins opined. “When I saw it happening, it was infuriating. That pissed me off. I’m an old-school guy. I don’t like when things like that happen. That was embarrassing, losing like that and having Marshawn dance like that.”

When you start rising to the top of the heap, those opponents you vanquish will find anything to deflect their own inequities by trying to cut into your fun. Even ESPN host Mike Golic, half of the show “Mike and Mike,” agreed. Although, he did apologize for roasting Jenkins on Monday morning.

Still, no one likes to get beat and then watch the other guys have fun. Yet, the Raiders don’t care. They’re having all the fun.

Of course, this joy will all be tested when there are bumps in the road – and there will be bumps. Every team has them – every season.

The way the Raiders are enjoying the game right now, you have to believe it’s going get them through those times.

Keep having fun boys. We’re having a blast too.