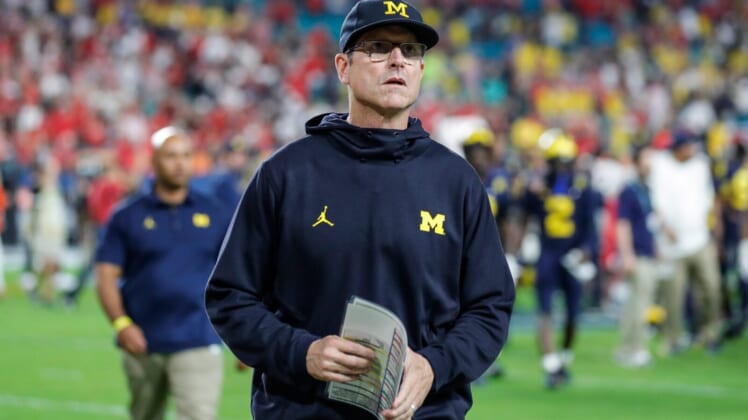 Michigan head coach Jim Harbaugh walks off the field after the Wolverines’ 34-11 loss to the Georgia Bulldogs in the Orange Bowl.

As the Jacksonville Jaguars interview head-coaching candidates for their open position, the Las Vegas Raiders have clawed their way to a win-and-in playoff situation with the Los Angeles Chargers on the Sunday Night Football stage in Week 18. Yet, the Silver and Black may have someone waiting for an opportunity to take over for interim head coach Rich Bisaccia.

According to The Athletic’s Bruce Feldman, Michigan head coach Jim Harbaugh might consider a return to the NFL.

“I think it’s real,” a source said to Feldman.

In Feldman’s report, he connected Harbaugh to the Raiders.

“The Raiders head coaching job might be tough for him to say no to given his ties to the organization — he started his coaching career there in 2003 — and the fact that there’s already a solid quarterback in place in Derek Carr.” Feldman wrote. “He’s also friends with Raiders owner Mark Davis.”

If Harbaugh has the itch to make an NFL comeback, the Raiders would make sense for both sides.

Jim Harbaugh is a great fit

First and foremost, Harbaugh wouldn’t have to tear down a team that will finish with a winning record. Vegas could clinch a playoff berth with a win over the Chargers Sunday or if the Pittsburgh Steelers and Indianapolis Colts lose earlier in the day.

Harbaugh wouldn’t need to go on an in-depth search for a quarterback with Derek Carr under contract for another term, though the front office would likely have to pay the 30-year-old signal-caller in a walk year.

Over the past few weeks, Carr hasn’t finished with appealing box-score numbers, but he’s come up big in clutch moments, leading his teammates downfield and putting them in a position to win late in games.

Based on Harbaugh’s track record, he’d provide a solid supporting cast around Carr, particularly with the ground attack. Even before dual-threat signal-caller Colin Kaepernick replaced Alex Smith under center, the San Francisco 49ers fielded the eighth-ranked rushing offense in 2011. At Michigan, Harbaugh struggled to develop a high-end quarterback, but he consistently pounded opponents with the ground game, using several running backs over the last seven terms. The Wolverines have ranked 31st (out of 130) or better in rushing for two of the previous four campaigns.

Though Bisaccia deserves praise for his leadership through a tumultuous campaign that included the loss of wideout Henry Ruggs III, whom the team waived after his involvement in a car accident that resulted in a fatality, Davis has to think about the long-term future.

Carr feeds off the run game and operates out of play-action. He’s usually effective. This season, the Raiders signal-caller completed 84 of 115 attempts for 1,119 yards, four touchdowns and an interception on play-action passes, per Pro Football Focus.

Harbaugh is similar to Jon Gruden, with a strong personality that can rub others the wrong way, which may explain why he didn’t stay in one place for too long in the past. However, the 58-year-old spent seven seasons at his alma mater in Ann Arbor. Perhaps a circle trip back to the organization that gave him a coaching start in the pros lasts for an extended period as well.

Unlike Gruden, Harbaugh isn’t returning from a 10-year break from the sideline. Secondly, at San Francisco, he worked under general manager Trent Baalke and didn’t have complete autonomy over the roster.

Lastly, Harbaugh has put together solid coaching staffs. During his four-year tenure with the 49ers, he hired Greg Roman and Vic Fangio as his offensive and defensive coordinators, respectively. Raiders fans have already pondered the possibility of Harbaugh reuniting with Fangio if the Denver Broncos fire their coaching staff. However, keeping Gus Bradley around wouldn’t be a bad idea either.

What about Rich Bisaccia?

In an interim role, Bisaccia has led the team since Gruden’s resignation after Week 5. The club has gone 6-5 under his tutelage.

Though Bisaccia deserves praise for his leadership through a tumultuous campaign that included the loss of wideout Henry Ruggs III, whom the team waived after his involvement in a car accident that resulted in a fatality, Davis has to think about the long-term future.

If Davis doesn’t believe Bisaccia is the guy to lead the club for four-to-five seasons, he should take a big swing at Harbaugh, who’s a proven head coach with a 44-19-1 record and a trip to the Super Bowl on his resume.

While Harbaugh’s detractors may push back on him because of his 1-5 record against Ohio State and only one College Football Playoff appearance, remember, the Wolverines’ recruiting classes don’t compare to the Buckeyes’ incoming groups. Ohio State has been a powerhouse program with NFL talent at various positions for the last two decades. Michigan hasn’t been on that level.

While Harbaugh’s detractors may push back on him because of his 1-5 record against Ohio State and only one College Football Playoff appearance, just remember, the Wolverines’ recruiting classes don’t compare to the Buckeyes’ incoming groups.

Harbaugh has the cachet to attract big-name free agents in the NFL, and the Raiders will have enough cap space to acquire them even if Carr signs an extension. Keep in mind; he’s on the books with a $19.9 million cap hit in 2022. Per Over the Cap, Vegas will have $42.9 million in cap space next year.

Unless Bisaccia leads Vegas to multiple playoff wins, Harbaugh, who’s won close to 70 percent of his games (.695) on the pro level, should be No. 1 on the Raiders’ priority list of head-coaching candidates.

Many have asked, why not keep Bisaccia and possibly Bradley on staff with a new regime? While that’s a logical idea, Harbaugh would have the decision on how he wants to fill his assistant roles, and both coaches may have enticing offers elsewhere as well.

In Feldman’s report, he wrote that Davis hasn’t determined Bisacca’s fate yet. We won’t have an answer until the Raiders’ season ends.

For now, the team will focus on the Chargers and a playoff spot, but don’t be surprised if Davis keeps close tabs on Harbaugh. He might also draw interest from the Chicago Bears, who may fire head coach Matt Nagy after an abysmal losing season (6-10).

Chicago selected Harbaugh in the first round of the 1987 draft. He played sevens for the franchise. The Bears and Raiders may compete for his services in the offseason. Nevertheless, if Davis works his strong ties to him, he may pull off another blockbuster head-coaching hire.