Raiders ground game must give way to a short passing attack 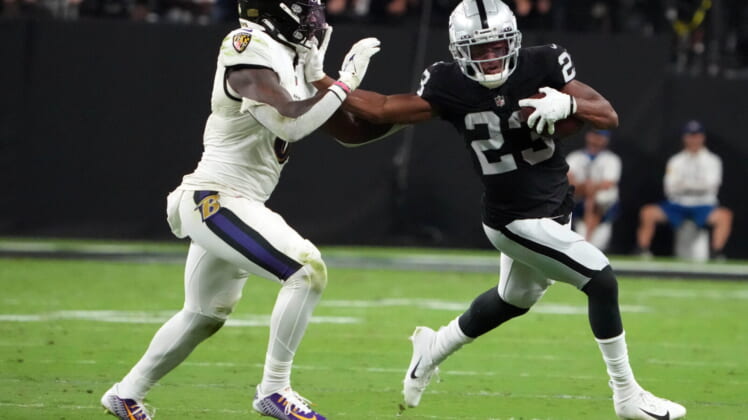 Over the past two years, Las Vegas Raiders head coach Jon Gruden has defined a clear staple in his offense. For the 2019 and 2020 seasons, the Silver and Black ranked 11th in rush attempts with the intent to establish the run game. The Raiders ground game has been a priority but due to injuries and the lack of availability of his top running back Josh Jacobs, Gruden has had to call a coaching audile.

To Gruden’s credit, he’s shown flexibility with a pivot away from that core principle of a focus on the Raiders ground game. Through two weeks, Derek Carr has carried the offense with the help of his diverse pass-catching group.

Early in the season opener against the Baltimore Ravens, the Raiders lost guard Denzelle Good for the year with a torn ACL. Guard Richie Incognito has yet to practice since he suffered a calf injury over a month ago. Running back Josh Jacobs went into Week 1 with an illness and missed the previous game with toe and ankle injuries. This has all meant the Raiders ground game has become a victim of those injuries and hasn’t factored into the team’s success thus far to the extent it usually would.

No one wants to hear excuses, but those injuries have certainly compromised the Raiders ground game. On top of that, Gruden understood that the Ravens and Pittsburgh Steelers posed a tough challenge on the ground.

“If you do the history on Pittsburgh and Baltimore, call me and tell me the teams that have run the ball up and down their throat,” Gruden said. “These are good run defenses. They’re also defenses that are committed to stopping the run with multiple people on the line of scrimmage and chaotic blitzes.

Without a healthy Jacobs, Vegas has leaned on Kenyan Drake and Peyton Barber to lead the Raiders ground game. Thus far, neither running back has provided a spark on the ground. Going into Week 3, Jacobs still leads the team in rushing yards, and quarterback Marcus Mariota, who played one offensive snap before he re-aggravated his quad injury, has had the most impressive run for this offense.

The Raiders ground game issues run a little deeper than injuries though. The offensive line hasn’t provided a collective push at the line of scrimmage. Remember, the club traded big maulers such as tackle Trent Brown (6’8″, 380 lbs) and guard Gabe Jackson (6’3″, 335 lbs). They also sent Rodney Hudson, one of the league’s best centers, to the Arizona Cardinals.

While we can justify Brown’s exit because of his inability to stay on the field, don’t overlook the effect of the change in personnel on the Raiders ground game. The Raiders chose to go with an inexperienced but athletic unit, which is a reasonable plan, but Drake and Barber are downhill ball-carriers who excel when they’re able to make one cut through a lane.

While Drake has been ineffective behind a less imposing and more athletic offensive line, Gruden seemed excited about Barber last Friday.

“It’s an opportunity for Peyton Barber,” Gruden said. “We really like Barber. We think he’s a heck of a back. Coming from Tampa, I’ve had the chance to really get behind the scenes on him. I like the way he runs and catches and picks up blitzes.”

Barber has always been a short-yardage back though. His average in yards per carry has dropped every year. Even with a well-time fourth-quarter 13-yard run against the Steelers, he’s currently at 2.5 yards per rush attempt:

The solution for a nonexistent Raiders ground game

Other than wait for Jacobs’ return, what can Carr and Gruden do about the sluggish Raiders ground game?

Let’s circle back to Drake. Though he’s not running the ball well, the sixth-year veteran has made significant contributions to the passing attack. He’s recorded 10 receptions for 105 yards (shoutout to fantasy football managers who picked him up in point-per-reception leagues).

Gruden can essentially mimic the handoff to a ball carrier by designing short passes for Drake. Carr’s short dump-offs to the running back are basically long handoffs to a playmaker.

Though Drake doesn’t seem to have the agility to create something out of nothing or find a lane behind a more athletic offensive line, he can run a short route and catch the ball in space.

In the bigger picture, Carr must continue to play at a high level to mask the inefficiencies of the ground game, but he has enough weapons to attack defenses in a variety of ways.

When Carr doesn’t push the ball downfield and prefers high-percentage throws underneath, he can target Drake, who’s replaced Jalen Richard (foot) as the primary pass-catcher out of the backfield. Though the short passing attack doesn’t replicate the physical aspect of running the ball through the teeth of a defense, that method allows the Raiders to pick up easy yardage on routine plays.

On Sunday, the Raiders will face the Miami Dolphins, who’ve allowed the fifth-most rushing yards. Let’s see if Gruden continues to feature Drake in the short passing attack or feeds Barber a healthy dose of carries to test one of the league’s weakest run defenses.