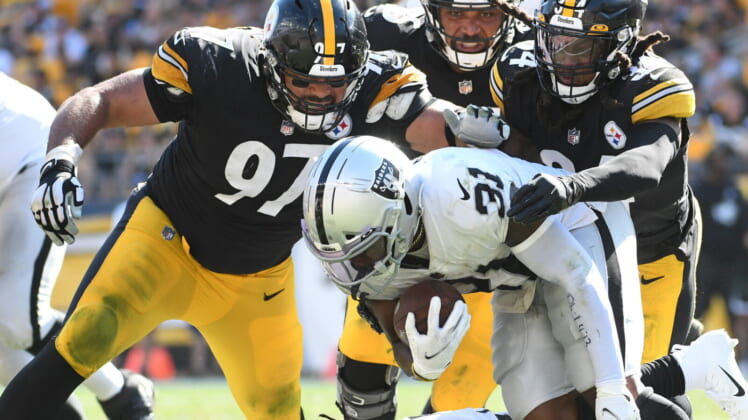 Las Vegas head coach Jon Gruden may not see last week’s performance as preparation for an AFC West showdown with the Los Angeles Chargers, but he reignited the Raiders ground game just in time to attack the worst run defense in the league.

Through three weeks, Los Angeles has allowed a league-worst 5.8 yards per carry, allowing at least 126 rushing yards in each game. In Week 2, the Dallas Cowboys steamrolled the Chargers’ defensive front for 198 yards on the ground and walked out of SoFi Stadium with a 20-17 victory.

As much as a wild west duel between quarterbacks Derek Carr and Justin Herbert would appeal to the casual Monday Night Football viewer, the Raiders should muddy up the game a bit.

Even if running back Josh Jacobs doesn’t suit up because of a toe injury, the Raiders ground game can win the day with Peyton Barber getting the majority workload for a third consecutive week with some confidence.

Barber lost weight this past offseason, but he didn’t make the final roster with the Washington Football Team, who instead kept undrafted running back Jaret Patterson.

A week before the start of the regular season, Gruden scooped Barber off the scrap heap to help the Raiders ground game. By Week 2, the sixth-year tailback led the Raiders in carries (13) against the Pittsburgh Steelers. He only accumulated 32 rushing yards but helped sealed the game with a 13-yard run to the Steelers’ 32-yard line down the stretch. Four plays later, the Raiders kicked a 45-yard field goal to go up 26-17 and put the game out of reach.

In Week 3 against the Miami Dolphins, Barber ran for a career-high 111 yards to lead the Raiders ground game. For the first time this season, the Raiders offensive linemen dominated their individual matchups on run downs and created ample space for the ball carriers. The Dolphins currently field the 27th-ranked run defense.

Now facing the league’s most generous run defense in the next matchup, Barber should be itching to carry the ball 20-plus times and build on last week’s momentum utilizing the Raiders ground game against the Chargers.

Josh Jacobs is the X-factor

Though Barber played a big role in the Raiders’ victory over the Dolphins, many Raiders fans would breathe a sigh of relief if Jacobs returns to action after missing the last two games.

During Monday’s press conference with reporters, Gruden provided an update on Jacobs’ status.

“I met with Josh this morning and we’re going to see how he feels on the practice field this week,” Gruden said. “Not making any predictions, but we’re hopeful we can get him back on the grass at some point this week.”

Cue Jim Carrey’s scene in the movie “Dumb and Dumber” when he says, “so you’re telling me there’s a chance”

Don’t underestimate Jacobs’ toughness. At well less than 100 percent, he’ll push to suit up for a big game.

On the flip side, if the Pro Bowl running back sits out, the Raiders may have a solid replacement in Barber with Kenyan Drake sprinkled into the offense as a downhill ball-carrier and reliable receiver in the short passing game. The Raiders could also use running back Jalen Richard as a pass-catcher if they activate him from injured reserve.

While the Raiders should test the Chargers’ biggest weakness, they can continue to attack through the air. With quarterback Derek Carr performing at a high level, a combination of his aggressive style and an effective ground game could become the blueprint for a victory Monday night.

The Chargers may choose to load the box in anticipation of a run-heavy game plan, which potentially opens up the field for Darren Waller, Henry Ruggs III, Bryan Edwards and Hunter Renfrow. All four pass-catchers have shown they can win their win-on-one matchups downfield.

With a few timely defensive stops, the Raiders offense could have the ball on the final possession for a game-winning drive, putting their fans through yet another spine-tingling finish. But regardless of the outcome, look for Gruden to establish the run right out of the gate.