Why Raiders should feel good about the playoff matchup with Bengals 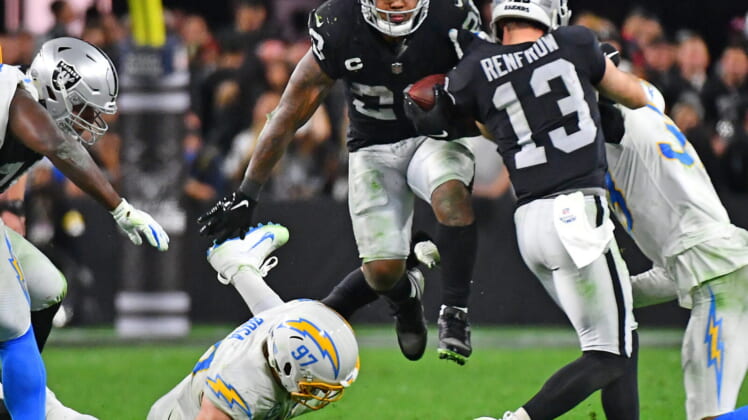 As NFL analysts scratch their heads and figure out how the Las Vegas Raiders went 10-7 in a season filled with turmoil, the Silver and Black can give them a little more to think about with an upset over the AFC North division-winning Cincinnati Bengals.

If you missed the Week 11 game between the Raiders and Bengals, the final score (32-13) would suggest Vegas endured a 60-minute beatdown at Allegiant Stadium. On the contrary, the Raiders trailed 16-13 up until wideout Ja’Marr Chase caught a six-yard touchdown pass with 5:03 left in regulation. From there, the wheels came off. Running back, Joe Mixon reached paydirt on a 20-yard run, and kicker Evan McPherson tacked on a field goal.

In summary, the Raiders ran out of gas with an inept offense that converted just one out of seven third-down attempts and turned three red-zone trips into just nine points.

On Saturday, Cincinnati will see a more robust run defense and a balanced offense that’s better equipped to execute in critical situations.

Let’s discuss why the Raiders should feel confident about matching up against the Bengals.

Over the past three weeks, Josh Jacobs has assumed the workhorse role, rushing for 324 yards and two touchdowns on 69 attempts. After a sluggish start to the season, he looks like the downhill threat that excited fans during his rookie (2019) campaign.

With fellow running back Kenyan Drake sidelined because of a broken ankle, the Raiders have fed Jacobs. Once again, he looks decisive after handoffs with a tendency to hit the open lanes rather than bounce east-to-west for little to no yardage.

Because of the Raiders’ inconsistencies in the passing game, they needed Jacobs to perform at the level of a first-round pick capable of setting a physical offensive tone and closing football games with chunk yardage on the ground.

In the first meeting between Cincinnati and Vegas, Jacobs logged just nine carries for 37 yards with 24 receiving yards. This time, the Raiders can lean on him to match big runs with Mixon on the opposing sideline.

Many casual football fans cannot wait to see the Burrow-Chase connection in the passing game. They’re shaping up to become one of the league’s most potent quarterback-receiver tandems.

However, in November, Burrow and Chase didn’t set off fireworks in Vegas. The sensational rookie wideout caught three passes for 32 yards and a touchdown. The second-year signal-caller threw for fewer than 150 yards and took three sacks.

Vegas fields a decent pass defense that ranks 13th in yards allowed. Battle-tested veteran Casey Hayward Jr. and rookie fifth-rounder Nate Hobbs have played well on the boundary and in the slot, respectively. The former allows a 57.1 percent completion rate while the latter gives up just 7.8 yards per catch.

Vegas has the defensive backs to cover downfield and the pass-rushers to apply pocket pressure, which puts Burrow in a tough spot. He’s taken the most sacks (51) this season. Meanwhile, the Raiders tied for third in quarterback knockdowns (68), thanks mainly to Maxx Crosby and Yannick Ngakoue on the edges.

If Vegas’ coverage and pass rush go hand in hand Saturday, Burrow could have a rough day.

Here’s an overlooked factor in the Raiders’ four-game win streak. They’ve tightened up the run defense, allowing just 78.5 yards per contest since Week 15.

Vegas won’t have defensive tackle Darius Philon (torn patellar tendon), who strung together solid performance through December, but Johnathan Hankins returned in the season finale after he missed two games with a back injury.

In Week 11, Mixon ran for 123 yards and two touchdowns on the Raiders defense, but he may find it difficult to replicate that performance against a unit that’s shown more resistance over the past month.

Winning in the trenches

If the Raiders dominate at the line of scrimmage, they can control the tempo of the game or at least keep the score close, setting up quarterback Derek Carr or kicker Daniel Carlson to put the game away on a late fourth-quarter drive.

With temperatures set to drop below 30 degrees in Cincinnati, we could see a battle between rushing attacks until one of the two quarterbacks has to make a big-time throw, which is something Carr has done routinely late in games over the past month.