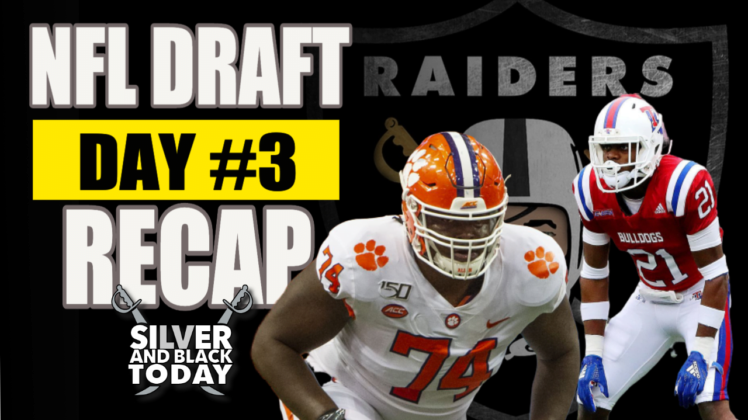 When NFL Draft experts talk about teams who draft successfully, they often talk about the middle-to-late round success and how it can make or break a team. The Las Vegas Raiders, for the second year in a row, appear to have performed well again as they draft All-American offensive guard John Simpson, and firey cornerback Amik Robertson.

Let’s take a look at final day picks for the Raiders and assess Saturday’s selections:

John Simpson was a workhorse for Dabo Sweeney at Clemson having played 2,043 snaps over 50 games (29 starts) in his career. His senior season was thought to be a breakout one for the big man as he earned Preseason All-American honors from Phil Steele and Athlon.

Simpson is a monster on the line and does a fantastic job of opening holes and running lanes and has a tremendous amount of physicality. And while he can be slow to get out of his stance, and dealing with adjustments in pass protection, his upside is sky-high. He has the ability to be a long-time starting guard in the NFL and his technique is already there where he can contribute right away if need be.

Simpson played on the left side at Clemson and said he preferred to stay there but is willing to do whatever coach Jon Gruden asks of him.

“Preferably I’d like to stay on the left side,” Simpson said during a conference all with the media. “I’ve been practicing coming out of my right-handed stance just trying to be as versatile as I can.”

While the Raiders have a good offensive line, depth and age are concerns and general manager Mike Mayock trading up in the fourth to grab Simpson was a savvy and smart move. Depending on what happens with veteran Gabe Jackson who has reportedly been on the trading block, Simpson could push for a starting spot. Pick Grade: B+

The Raiders second pick of the fourth round was just as stellar as the first as they grab undersized but tough cornerback Amik Robertson. Robertson doesn’t play his size and will be a competitive and nice addition for the team at slot corner next to, perhaps, first round pick Damon Arnette.

Robertson had a monster 2019 with 60 tackles, eight for loss, and five interceptions, He earned second-team Associated Press All-American honors and tied for the most pass breakups (16) in the nation. Robertson was his team’s leader in interceptions all three years and scored on three of his 14 career pickoffs.

Amik Robertson is more a physical player than technically oriented but he’s not intimidated by big receivers in the slot. He punches above his wait and his aggressiveness fits in nicely with what the Raiders are building. That aggressiveness could be an issue when it comes to penalties so the Raiders will have to keep a close eye on it.

Robertson’s greatest asset is his ball skills. They are remarkable as he’s able to see every ball and overlap in coverage to make plays on them. He led the Bulldogs with five interceptions (including one TD) and finished second on the squad with 7.5 tackles for a loss.

The only reason, aside from size, he slipped to the Raiders in the 4th was a groin injury that required surgery in January. The Raiders get a guy who could make an instant impact (Lamarcus Joyner, a natural safety, is still playing the slot for Las Vegas) on defense and if he can stay clear of the officials while managing his aggressiveness, he fits the Raiders culture perfectly. Pick Grade: A

Although John Simpson has some work to do with his feet, he’s a very good pick at position of need for the Raiders in 2020 and beyond. He’s a winner and durable who looks to make a nice career for himself in the NFL.

With Amik Robertson, we think the Raiders got exactly the type of player they need on defense when you’re gunning for the Kansas City Chiefs. With his ability to play bigger than he is, and his lights-out ball skills, he was a home run pick for the Raiders in the fourth round.

Overall Round 4 Grade: A-