Raiders Get More Dynamic With Third Round Picks 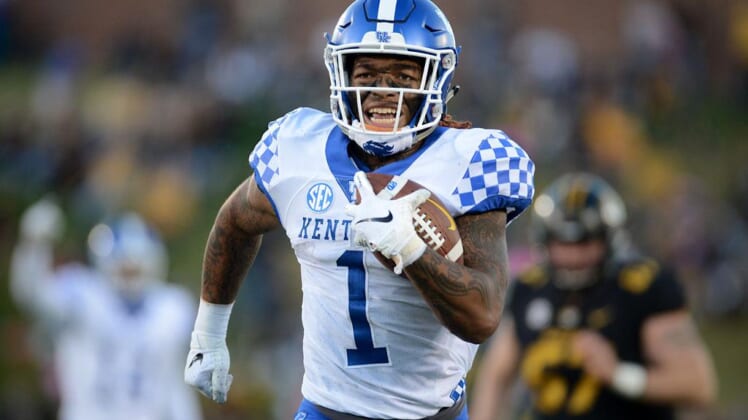 The Las Vegas Raiders and their fans have long lamented the lack of playmaking ability at wide receiver. Not any longer as the team adds Lynn Bowden, Bryan Edwards and likely special teams linebacker/safety Tanner Muse on Day 2 of the NFL Draft.

Las Vegas Raiders general manager Mike Mayock and head coach Jon Gruden sat down to talk at the end of last season and agreed on one thing: their team needed some new wrinkles.

On the second day of the 2020 NFL Draft, the Raiders added a pair playmakers in Kentucky running back Lynn Bowden, Jr, and South Carolina wide receiver Bryan Edwards.

“Number one, let’s be honest, the entire league is chasing the Kansas City Chiefs, but we’re in same division,” Mayock said. “They keep getting faster and more athletic, more dynamic every time you turn around. Other teams have to do the same. We’re trying to do that on both sides of the line scrimmage.”

If the Raiders were focused on getting more dynamic on offense, they continued to succeed at doing so.

Lynn Bowden is a special case and the Raiders first pick at No. 80 in the third round is a Swiss Army knife for Gruden on offense. Even though the Raiders said they plan to play him at RB, Bowden is often compared to the New Orleans Saints hybrid quarterback/receiver Taysom Hill. Bowden can line up at running back, receiver or even quarterback. He was a quarterback at Kentucky after all, albeit a mostly running signal-caller.

When asked about playing multiple positions in college, Bowden said he’s up for anything Gruden and the Raiders ask of him.

“Whatever they need me to play,” Bowden said. “I’m not set on one position. I’m trying win as many games as we can, get the championship. Wherever [Head] Coach [Jon] Gruden wants me to play, that’s where I’m going to play.”

From all indications, Bowden will play running back for the Raiders who had on their list another back behind Josh Jacobs.

The 2019 Paul Hornung Award which honors college football’s most versatile player, Lynn Bowden adds that dynamic player Gruden and Mayock coveted. In fact, Bowden is the only Division I FBS player in the last 20 years to compile 1,500 kick return yards, 1,000 rushing yards, 1,000 receiving yards and 400 passing yards in a college career.

Bowden led his team in both receiving and rushing yards in 2019 and became the Wildcats second-leading single season rusher and compiled 4,660 all-purpose yards at Kentucky.

At pick No. 81, the Raiders grabbed another receiver to stock Derek Carr’s arsenal in the Gamecock’s Bryan Edwards who could be a steal. Howard draft stock was hurt by injuries during the draft process and the Raiders gained from it.

While he might not be a speedster like first-round pick Henry Ruggs III, his large gait means he moves smoothly and gains yard because of it. He has enough burst to create the separation he needs against defenders.The foot injury that dogged him and hurt his standing in the draft is healing nicely he said and he’s not concerned it will hamper his joining the Raiders.

Edwards also exhibits the mental and physical toughness Gruden likes in his players and wideouts. He has good route running skills and isn’t afraid to go over the middle. He has no problem in traffic and should be a contributor right away.

“And we see Edwards an outstanding ‘X’, meaning he’s a big physical tough fast wide receiver on the opposite side,” Mayock said. “We think he can win one-on-one matchups. We loved his production in the SEC.”

Although not as dynamic as other receivers, in Gruden’s system with the new corps of wide receivers Las Vegas has put together, he’s a perfect compliment and an amazing get in the third round.

The first-round head-scratcher was Damon Arnette and the selection of Clemson’s Tanner Muse makes that pale in comparison.

On further examination, although they technically reached for Arnette in the first, he’ll be a top-notch NFL starter. You can’t say the same for Muse.

While its true Muse offers value from a versatility standpoint, in the NFL he figures to fit best at the weakside linebacker. That spot is filled by the recently signed Cory Littleton. That means Muse will serve primarily as a special teams player for the Raiders. To use the 100th pick in the draft on a special teams player makes little sense.

“The rub for him day one is to be a core special teams player,” Mayock said. ‘While he’s getting 20, 25 snaps a game at special teams he’s got to learn how to learn MIKE and WILL linebacker. He’s predominately a safety but he’s going to be a linebacker for us. We think he’s one of the smartest and most intuitive players in the draft and we expect him to learn both positions in addition to playing special teams.”

While Mayock and Gruden think highly of Muse, his NFL Combine evaluation had a much different take.

“Slow-footed safety with hybrid linebacker tendencies. Muse plays with tight, restricted movement that lacks necessary fluidity to handle coverage duties as an NFL safety and he’ll likely be asked to slide into a full-time linebacker role.”

Depth and talent to play special teams is sometimes underrated but, again, spending the 100th pick on a player like Muse doesn’t make much sense. Perhaps Mayock and Gruden see something no one else does.

There’s no question the Raiders nailed their first two third-round picks with the dynamic Bowden and the big and physical Edwards. The Raiders have strengthened greatly their ability to score points, go vertical, and convert in the red zone. They added Ruggs in the first round and quarterback Derek Carr has a more fluid, dynamic and explosive offensive squad to work with. If he can perform anywhere near his stellar 2016 season, the Raiders could finally score points like never before.

The Muse pick is the only reason for doubt after today’s draft selection. The delta between what Mayock says about the player, and what almost every other evaluator has written about the Clemson product is too great and drafting a special teams project in this round is by far the team’s only miss.