Legitimate Gripe: Raiders game rescheduled due to COVID outbreak in Cleveland and they’re not happy 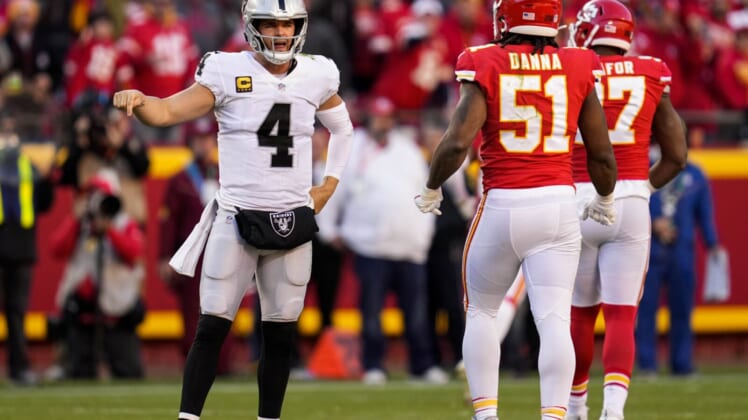 On Friday, the NFL made a decision that stirred anger among players and fans, postponing three games, which included Saturday’s matchup between the Las Vegas Raiders and Cleveland Browns. With the Raiders game rescheduled, the team took to social media to complain about the league’s hypocrisy.

Do they have a point?

Raiders fans and people associated with the players who had plans to attend the game have a legitimate gripe. Unlike the NFL, they cannot rearrange their schedules under short notice. That’s a fair grievance.

Among the many tweets from players, linebacker K.J. Wright and cornerback Casey Hayward Jr. expressed their frustrations with the Raiders game rescheduled at the last minute.

Social media heard Wright and Hayward loud and clear, so let’s take a look at the league’s memo on forfeitures, postponements and decisions on schedules amid COVID-19 outbreaks.

In the first paragraph of the second tweet, pay attention to the following: “Postponements will only occur if required by government authorities, medical experts, or at the Commissioner’s discretion.”

This is key when you look at why and how the Raiders game rescheduled for Monday created some confusion.

This is the first loophole that basically gives the Commissioner the right to use his judgment in specific situations. The Browns had 20-plus players test positive for COVID-19 with more cases coming in almost 24 hours before Saturday’s scheduled kickoff. Cleveland moved defensive end Jadeveon Clowney and running back Kareem Hunt to the reserve/COVID-19 list Friday afternoon.

With positive tests still coming in, the NFL likely wanted to avoid further spread to Raiders players who would share the field with a team fully exposed to the virus, which may cause an even bigger problem for the Silver and Black in its next matchup against the Denver Broncos in Week 16.

As NFL Network’s Tom Pelissero points out games were rescheduled because of the ongoing spread among teams last year, so that correlates with the Browns’ current situation:

No case for forfeit as Raiders game rescheduled in time

Philadelphia Eagles cornerback Darius Slay thought teams would have to forfeit if they experienced widespread outbreaks:

Let’s go back to the NFL’s memo:

On Friday, the Browns released a statement and revealed that every player who tested positive had been vaccinated.

Davis’ idea to move the game back to Las Vegas seems plausible, but the NFL would have to punish a team with a high number of vaccinated players, which is the opposite of what the league wants to do

While we can quibble with the validity of that announcement, it’s on the NFL to make sure that’s an accurate statement. The Raiders game rescheduled for Monday fits in with the text of the rule, but clarification was never made by the NFL.

Lastly, players should think twice about calling for forfeitures as players on both teams would lose payment for that game. All that hard work throughout the week for no compensation? Who wants that?

Owner Mark Davis chimed in on the hot-topic discussion via ESPN:

Davis’ idea to move the game back to Las Vegas seems plausible, but the NFL would have to punish a team with a high number of vaccinated players, which is the opposite of what the league wants to do. Based on the protocols, clubs with low vaccination rates would bear the brunt of the inconvenience.

Raiders fans sense hypocrisy when the league moved the club’s primetime contest with the Tampa Bay Buccaneers up a few hours in Week 7 last year.

However, the Raiders’ situation is different from the Browns’ current outbreak because Cleveland is dealing with several positive tests rather than close contacts.

Vegas didn’t have a widespread outbreak before that contest, but its starting offensive linemen missed practice because they were close contacts to Trent Brown, who tested positive. They all played though. Safety Johnathan Abram had to sit out because his isolation period (as a close contact) didn’t expire in time for kickoff. On top of that, Brown hadn’t been consistently wearing his tracking device, which complicated matters with contact tracing.

In fairness, the NFL should’ve pushed the Raiders vs. Bucs matchup back instead of forward. No question there. However, the Raiders’ situation is different from the Browns’ current outbreak because Cleveland is dealing with several positive tests rather than close contacts.

Again, if the league’s aim is to stop a spread, it’s not going to allow a team with ongoing cases to take the field and pass the virus along, which may have put the Raiders in the same situation as the Browns next week.

The Raiders game rescheduled for Monday doesn’t put the team at a competitive disadvantage, but it certainly shows the NFL’s policies, and how they communicate, leave a lot to be desired.