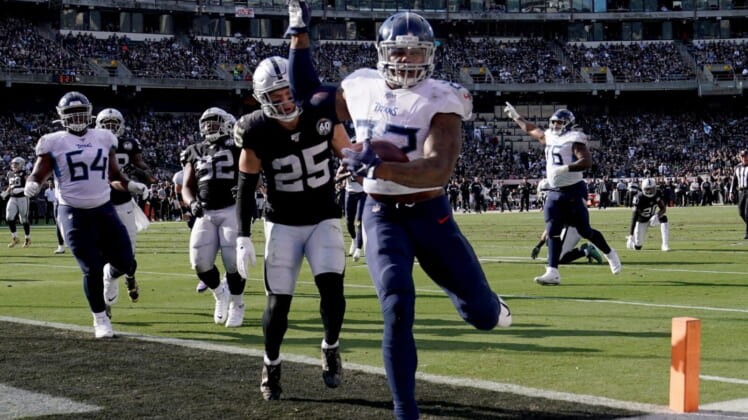 OAKLAND, CALIFORNIA – DECEMBER 08: Derrick Henry #22 of the Tennessee Titans carries the ball for a 12 yard touchdown run against the Oakland Raiders during the first half of an NFL football game at RingCentral Coliseum on December 08, 2019 in Oakland, California. (Photo by Thearon W. Henderson/Getty Images)

It was a tale two halves – again – as Oakland is shutout in the second half as the offense continues to struggle and the defense can’t stop Tennessee.

It’s no longer a trend and has now become the new normal as the Raiders (6-7) offense lays an egg again in the second half in a lopsided loss to Tennessee (8-5) in front of an unhappy crowd of boo-birds in Oakland.

Just how bad was the Raiders offense in the second half?

The Raiders have scored just nine points in the second half over the past three games and have just two 4th-quarter touchdowns since Week 10.

The team once again failed to score in the 3rd quarter (they’re dead-last in the NFL in 3rd quarter scoring in 2019) and now have scored just nine points in the final 30 minutes of their last three games. The Raiders also have just two 4th quarter touchdowns since Week 10.

“I’ mean we’re trying every way we can too win a game,” Gruden said after the loss. “I know we had some ugly moments today, and in the last couple weeks, but we’ve had some real bright spots this season.”

The game started well for the Raiders who kept counterpunching the hot Titans offense. Both teams exchanged three touchdowns in the first half and went into the intermission tied 21-21.

Then the proverbial wheels fell off for Oakland in the second half.

The Raiders had the ball six times in the second half and managed only one drive over 40 yards – and that was the final drive of the game where they failed on a fourth-and-goal from the Titans 1-yard line.

This after Derek Carr and the Oakland offense started the game hot, despite missing their star rookie running back Josh Jacobs who was sidelined with a shoulder injury.

Carr finished the day going 25-of-34 for 263 yards and two touchdowns. You can’t put the loss on the quarterback but Carr continues to be unable to elevate his team at key moments when other problems occur on offense or his defense is unable to make a stop. The fervor over Carr and his performance will continue as he struggled again in the second half.

As big part of the story in the loss to the Titans was the ineffectiveness of the Raiders defense to stop the Titans at all.  Tennessee racked up 552 yards of offense, had a 300-yard passer, 100-yard rusher, and a 100-yard receiver in rookie AJ Brown who finished with five catches for 153 yards and two touchdowns. Running back Derrick Henry, despite an early hamstring injury, rushed for 103 yards and two touchdowns in the win.

“You’re not going to beat anybody like that,” Gruden said. “We gave up a 90-yard touchdown pass. You know, we missed some tackles. I mean they missed a field goal in the first half or they’d have three more points. A lot had to do with their ability to make plays.”

The Raiders faced a must-win against the Titans at home to keep their slim playoff chances alive. With the loss, it’s not mathematically impossible, but improbable to say the least.

“A lot of things went into today’s game,” a visibly uncomfortable Carr said at this post-game press conference. “We did not play well enough – we can all play better including me. I have to start with myself.”

Some bright spots for the Raiders included recently activated wide receiver Rico Gafford’s first NFL touchdown – a beautiful 49-yard strike from Carr in broken coverage. Darren Waller had six catches for 73 yards but coughed up a costly 4th-quarter fumble that was returned for a touchdown. The 46-yard fumble recovery touchdown by Titans linebacker Jayon Brown sealed the fate of the Raiders on this day.

Defensively, the lone bright spot was Maurice Hurst’s 55-yard interception return which set up the Raiders first score of the day.

The Raiders host the Jacksonville Jaguars at home next week which will be the team’s final ever game in Oakland before the move to Las Vegas.