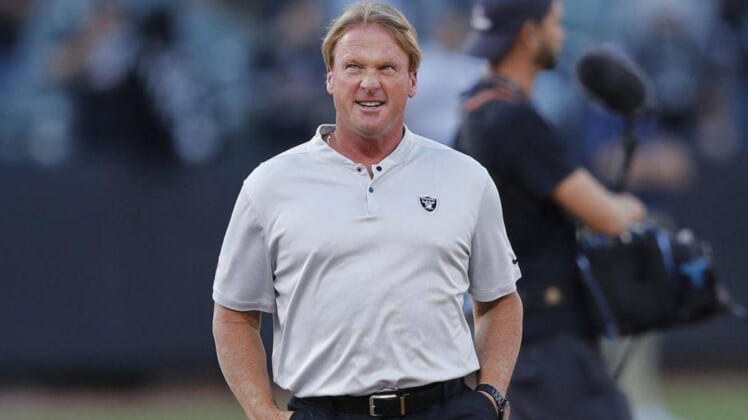 If there’s one thing we’ve learned since the return of Jon Gruden – and his alter ego “Chucky” – it’s things aren’t always what they seem.

Doing a Raiders focused radio show, we often have listeners who disagree with some of what we say on the air. Whether it’s me, or my co-hosts Kelly Kriner and Chaz Osborne, not everyone agrees with what we say or the opinions we espouse.

The last few weeks as we approach what is a massively important draft for the future of the franchise, we’ve talked a lot about possibilities and scenarios we might see on draft day. Like most folks in the media, we’re all just taking shots in the dark using information we have. It’s a guessing game but it’s April and the season is still four months away.

This quarterback scenario has Raider Nation absolutely bonkers. The Raiders fan-on-fan hate and debate is at an all-time high. There are those who still believe (I’m not one of them) that Derek Carr isn’t the answer. And then there are those who would possibly fight you if you say one critical word about Carr. It’s a polarizing issue and it won’t subside until after we see what the team does in the draft.

Still, I think those on the “no way in hell they draft Kyler Murray” camp are missing the bigger point here. Many of us talk about it or explore the subject not because we think it’s the most prudent or that it will happen. But it might and you can’t rule it out – as outlandish as some of us may think it is.

I had one viewer on YouTube call it “link bait.” I disagree as we’re not that type of site. If we’ve learned anything since the return of Gruden to the Raiders is that he’s unpredictable.

How many of you expected the Khalil Mack trade?

With every ounce of my being, I’m convinced this Murray and quarterback ploy is just that – a ploy to get an upper hand. Our friend Mo Moton appeared on our show this week and wrote a column I buy wholeheartedly. It’s a smokescreen but that doesn’t mean it couldn’t happen. It still could happen.

As Mo laid it out:

Outsiders may think Derek Carr stands on shaky ground as Gruden speed dates other quarterbacks, when in fact, he may be using them to increase his chances at landing a 6-3, 303-pound interior pass-rusher out of Alabama. If a trade materializes, Chessmaster Chucky could move in for the checkmate April 25. – Mo Moton

Despite my belief it is all just a game of master chess by Gruden and Mayock, it could get interesting if Murray (or even Haskins) is still there and the Raiders stand pat at No. 4.

It’s a long shot but what’s the harm in exploring when the Raiders leadership is acting disruptive and unpredictable?

I still believe Derek Carr will be the franchise quarterback in 2019 and beyond when the team gets to Las Vegas. I expect him to regain his 2016 form and once again silence the critics.

But I call on you to have an open mind and don’t get to married to one pick or one scenario. You might just be setting yourself up for disappointment.

Chessmaster Chucky (thanks Mo!) might have more than you can imagine up his sleeve.