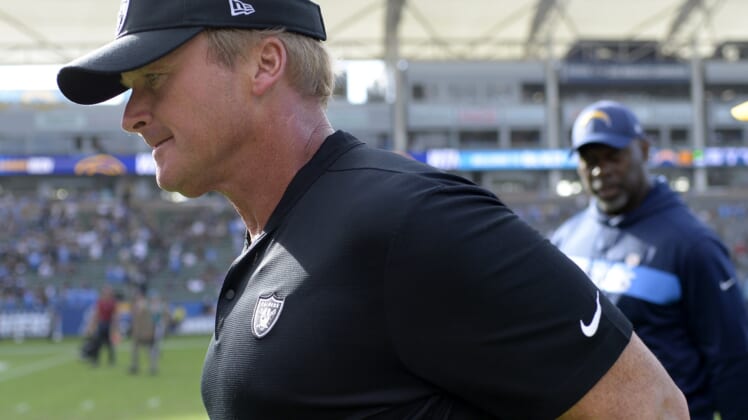 The Oakland Raiders are a complete and utter dumpster fire under first-year head coach Jon Gruden. They are coming off a humiliating 27-3 loss to the Seattle Seahawks in London and boast a league-worst 1-5 record on the season.

Sunday’s loss was about as bad as it gets. It included quarterback Derek Carr appearing to cry on the field. It also came mere hours after reports surfaced that the Raiders were looking to trade multiple core pieces before the Oct. 30 deadline. It’s bad. Really, really bad.

Unfortunately for Raiders fans, it doesn’t appear the ship is going to be righted any time soon. Gruden is looking to rebuild the roster to his liking, which will lead to more struggles on the field. He’s also in his first year of a 10-year contract.

Raiders fans are not happy. And they’ve now shown it by starting a website focusing solely on counting down until Gruden’s 10-year contract is up. The title is simply “Is Gruden gone yet?”

It is literally counting down the years, months, days, hours, minutes and seconds until Gruden’s contract expires.

Tell us how you really feel, Raiders fans?

Is Gruden Gone Yet? Is now a website. And it's glorious. https://t.co/81HzNkCr8g pic.twitter.com/4wBx9Manv0

Needless to say, fans in Northern California are not happy with how the season has turned out. The trade of Khalil Mack prior to Week 1 played a role in this.

But in reality, it’s the lack of competitiveness that we’ve seen on the field that has alienated what had been a strong fan base.