Raiders Draft Targets for Future at QB Could Be Love, Hurts 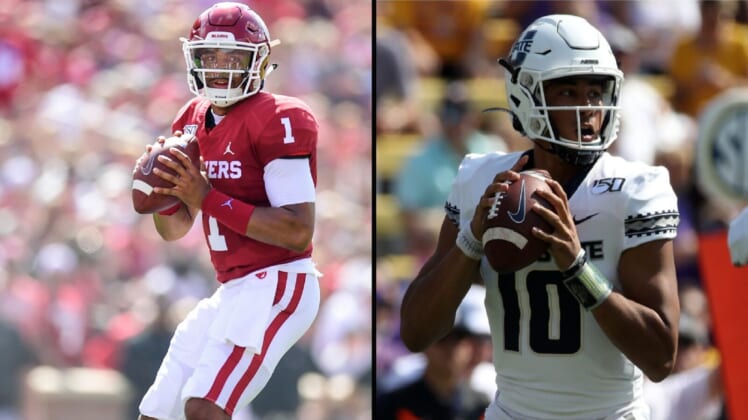 Report indicates the Las Vegas Raiders have narrowed their look at future quarterbacks available in the 2020 NFL Draft to two players.

According to Tafur’s report from the NFL Combine in Indianapolis, general manager Mike Mayock and coach Jon Gruden have narrowed their choices if they were to decide to move on from current starter Derek Carr, or if they’re just looking for the heir apparent.

Despite their affinity for Love and Hurts, Mayock does have reservations, according to The Athletic story, about Love – especially due to his performance his senior season.

“He’s a big, strong kid with a big arm,” Mayock said in Tafur’s piece. “He’s athletic. He was a basketball player — you can see that in his movement skills. So the upside of the kid is really cool. I think the caution, or the downside, would be that he had a good junior year but his senior year wasn’t as good.”

Hurts, who has been asked if he’d be willing to play at other positions in the NFL (he said no), is also intriguing to Gruden who sees a bit of Patrick Mahomes him the QB.

Despite the chatter around the Raiders taking a quarterback in the draft, the story broke on a day when Mayock, once again, gave Carr a tepid vote of confidence. Although he defended Carr and talked about his very good 2019 season, he also continued to fan the flames of speculation by saying he wouldn’t hesitate to upgrade the Raiders at every position – including quarterback.

But later on in his statement, he said when asked if he’d upgrade at QB if possible.

Allbright will be our guest this Sunday from 8-10 AM PT on CBS Sports Radio 1140.