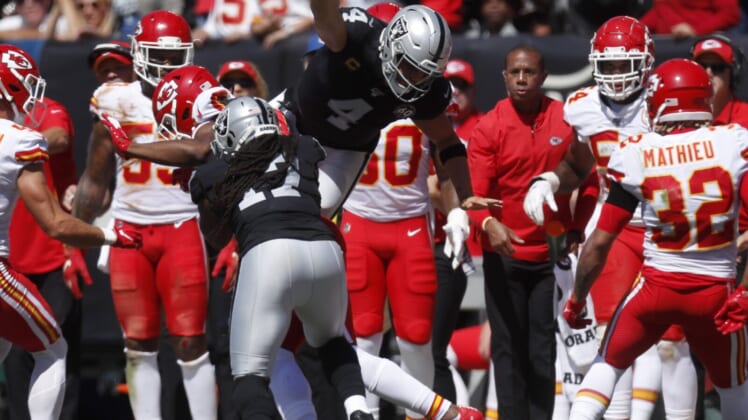 OAKLAND, CA – SEPTEMBER 15: Oakland Raiders starting quarterback Derek Carr (4) dives forwards on a 3rd and 11 for an attempted first down against the Kansas City Chiefs in the second quarter of their NFL game at the Coliseum in Oakland, Calif., on Sunday, Sept. 15, 2019. Carr was short of a first down. (Nhat V. Meyer/Bay Area News Group)

As I have said over and over again on Silver and Black Today all offseason: Raiders fans should not get too high when this team does well, and not get too low when they struggle.

In Week 2 of the 2019 NFL season, Raider Nation would be wise to take that advice after their team was dominated by the electric Patrick Mahomes and the Chiefs in a forgettable contest for the silver and black.

Facing their AFC West rivals in the final game between the two teams in Oakland, the Chiefs dominated the overmatched and young Raiders defense coming from a 10-0 first quarter deficit sending a strong signal their still the team to beat.

As good as the Chiefs are, the Raiders cratered their own chances with poor defensive play, careless pre-snap penalties, and the inability to cash in on trips the red zone.

“We ran into a buzzsaw for about 7 minutes today,” coach Jon Gruden said. “I have to credit the Chiefs. We didn’t get enough pressure and Mahomes got to cock his arm and drop them in.”

The Raiders surrendered 464 offensive yards to Mahomes and the Chiefs, including several third-and-long plays that hurt their chances to stay in the game. At one point, Mahomes completed five consecutive passes of over 26 yards, including a 42-yard touchdown pass to Mecole Hardman on a 3rd-and-20 when it appeared the Raiders may make a big defensive stop.

Third-year cornerback Gareon Conley, who played well in coverage at times, was a Mahomes victim several times. The Chiefs and Andy Reid made the conscious effort to target Conley and it worked flawlessly. But it wasn’t just Conley – the entire Raiders defensive backfield had trouble covering the Chiefs’ multitude of offensive weapons.

Oakland, who lost its new heart and soul in the defensive backfield in rookie Jonathan Abram to season-ending shoulder surgery, was easy pickings for the 2018 NFL MVP Mahomes. Mahomes finished the day 30-for-44 for 443 yards and four touchdowns. The vertical passing game couldn’t miss against the porous Raiders defense.

The Raiders quarterback Derek Carr finished 23-of-38 for 198 yards, one touchdown and two costly interceptions – including one in the red zone.

With a first-and-goal from the Chiefs four, Carr dropped back to pass and floated a ball to the corner of the end zone intended for Tyrell Williams. Williams didn’t appear to be on the same page and Kansas City’s Bashaud Breeland easily intercepted Carr ending the drive.

“There was an all-out blitz and we miscommunicated on the hand signal,” Carr said after the game.

Although Carr was sacked twice against Kansas City, the offensive line continued to play well – a marked improvement over last year. The Chiefs were much stronger up the middle than Denver and Carr was under more pressure than in Week 1. He still was able to work outside the pocket and create plays after the original call broke down.

Oakland now must face the gauntlet of a six-week road trip (including a bye) traveling next Sunday to Minneapolis to take on the Vikings (1-1) who lost to rival Green Bay 21-14 Sunday. Minnesota is an early 7.5 favorite according to William Hill Sports.