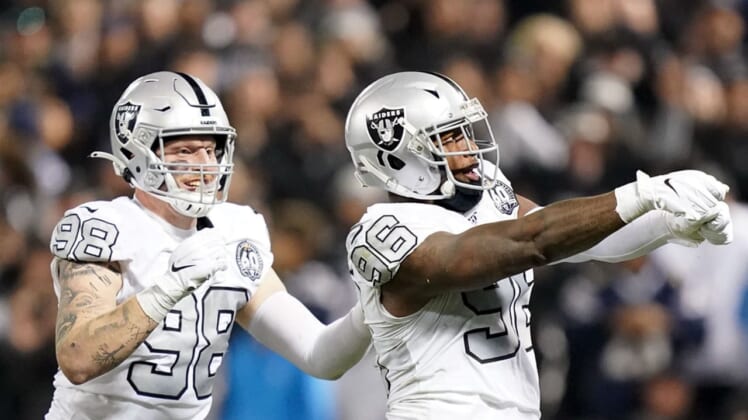 With Las Vegas Raiders Coach Jon Gruden declaring his preference to remain with a 4-3 base defense, that news is just the ticket for young defensive core players Clelin Ferrell and Maxx Crosby.

When the Las Vegas Raiders fired defensive coordinator Paul Guenther, many fans asked about one of the most respected play-callers as a potential replacement, Wade Phillips. After Jon Gruden’s Monday press conference with reporters, you may want to turn your attention to other possible candidates. But, within that nugget by Gruden was most likely good news for Raiders core defensive players Clelin Ferrell and Maxx Crosby.

According to Vincent Bonsignore of the Las Vegas Review-Journal, Phillips has some level of interest in the Raiders’ defensive coordinator position. But his 3-4 base scheme conflicts with Gruden’s preference for an even four-man front.

“We would like to be a 4-3 outfit,” Gruden said. “Don’t get me wrong, we’d like to have some three-down elements and be multiple, but we want to play four bigs if we can.”

Phillips seemed to indirectly plead his case via Twitter.

Jason La Canfora of CBS Sports has heard of four names connected to the job, and all of them have employed or currently use some variation of a 4-3 base:

As of right now, Phillips seems like a long shot to join Gruden’s staff, which isn’t what most fans want to hear, but at least the Raiders head coach has his qualifications in order. He listed the strengths of an ideal candidate.

“I think number one, great communication,” said Gruden. “A guy that can develop players, a man that will utilize his assistant coaches and allow them to express themselves and get more out of their units and a guy that has a history of success, a guy that has a great day-to-day work ethic and knowledge of the offenses that he has to stop.”

If a coordinator has all of the above qualities, why does the scheme, even- or odd-man front matter?

More than likely, Gruden wants to maximize the talent of defensive ends Clelin Ferrell and Maxx Crosby at their natural positions while generating a consistent pass rush with some of the rotational defenders.

Let’s take an honest look at Clelin Ferrell’s first two seasons. At times, he’s a solid player, more so as a run defender than a pass-rusher, which isn’t good enough after the Raiders traded Khalil Mack to the Chicago Bears.

No, Clelin Ferrell doesn’t have fill Mack’s cleats, but the Raiders haven’t generated a consistent pass rush since the trade. They’ve ranked 32nd, T-24th and 29th in sacks over the last three campaigns. Although Vegas listed 17th in quarterback pressures with 138 this season, Ferrell only accounted for 19 of them.

Ferrell tested positive for COVID-19 and missed three games because of a shoulder injury. Still, he recorded just 27 tackles, three for loss, two sacks and three pass breakups for the season.

Gruden understands he needs more from Clelin Ferrell and transitioning the scheme to a 3-4 base could hurt the 2019 first-rounder’s progress. From his three-year stretch as a starter at Clemson through the first two campaigns with the Raiders, Ferrell has lined up in an even-man front.

Occasionally, the Raiders moved Ferrell inside and had some success. He put together his best game against the New York Jets in Week 13, logging two sacks, one as an interior pass-rusher.

As a 3-4 base defensive end, Ferrell would be responsible for two gaps, which takes him out of attack mode at the line of scrimmage. At 6’4″, 275 pounds, he’s an edge-setter better suited to play with his hand in the dirt (three-point stance) than as a stand-up edge-rusher (two-point stance).

In a four-man front, the Raiders can continue to slide Ferrell inside and match him up one-on-one against smaller defensive tackles in a one-gap scheme.

Maxx Crosby has suited up for every game in two seasons, recording 17 sacks. He’s undoubtedly the Raiders’ best pass rusher. With that said, the coaching staff cannot rely on him to consistently beat double-teams.

Gruden talked about generating interior pressure to take some attention away from Crosby. Guenther thought Maliek Collins would help in that area, but he provided very little impact in the 3-technique defensive tackle position.

The Raiders need an interior defender who’s a constant disruptor right up the middle. They should spend money on Larry Ogunjobi if the Cleveland Browns allow him to hit the open market. The New York Giants will likely keep Leonard Williams on the books.

Although the Raiders can line up Crosby (outside) and Ferrell (inside) on the same side of the line, a full-time natural starter at defensive tackle would be ideal for their four-man front.

With Maxx Crosby’s motor and a pass-rushing presence on the interior, the Raiders can rack up some sacks. The two can work hand in hand. At a much higher level, think about how Kansas City Chiefs’ Frank Clark (outside) and Chris Jones (inside) wreak havoc at the line of scrimmage.

Like Ferrell, Maxx Crosby has usually lined up with his hand in the dirt (three-point stance) but on the weak side. He’s not a lock to make a smooth move to 3-4 edge-rusher.

At the end of the season, Gruden talked about Vic Beasley and Takkarist McKinley as part of the team’s future. The former played in the last five games.

Beasley and McKinley could sign elsewhere in free agency, but they’re both familiar with four-man fronts from their time in Atlanta. On occasion, the two defenders lined up on the same side of the formation similar to Ferrell and Crosby. McKinley (265 lbs) moved inside while Beasley (246 lbs) rushed from the perimeter.

The new defensive coordinator can use different personnel groupings with Clelin Ferrell and McKinely able to shift inside. David Irving also fits into the mold of a player who can line up on the perimeter or on the interior. He appeared in two games for the Silver and Black and could test the market in the offseason.

Finally, Hurst has played in a 4-3 base since his days at Michigan. He’s the only natural defensive tackle on the books for the 2021 campaign. The former Wolverine could be in line for more snaps. If that’s the case, he’s better off in a one-gap scheme.

At 6’2, 291 pounds, Hurst isn’t big enough to play the nose tackle position in a 3-4 base. Without experience handling two gaps in the pros, he’s not fitted for a smooth transition to a 3-4 defensive end.

The Raiders will likely add two defensive tackles to replace Collins and Johnathan Hankins. Hurst could play a solid role under a new coordinator who can develop high-potential talent. Keep in mind he had 7.5 sacks in his first two seasons.

And yes, like most teams, the Raiders defense operates mostly out of the nickel package, but a 4-2-5 alignment still maintains a four-man front whereas a 3-4 transitions to a 3-3-5 look.

In this case, Gruden’s push for schematic continuity makes sense, specifically for his best pass-rusher (Crosby) and top pick of the 2019 draft (Ferrell).